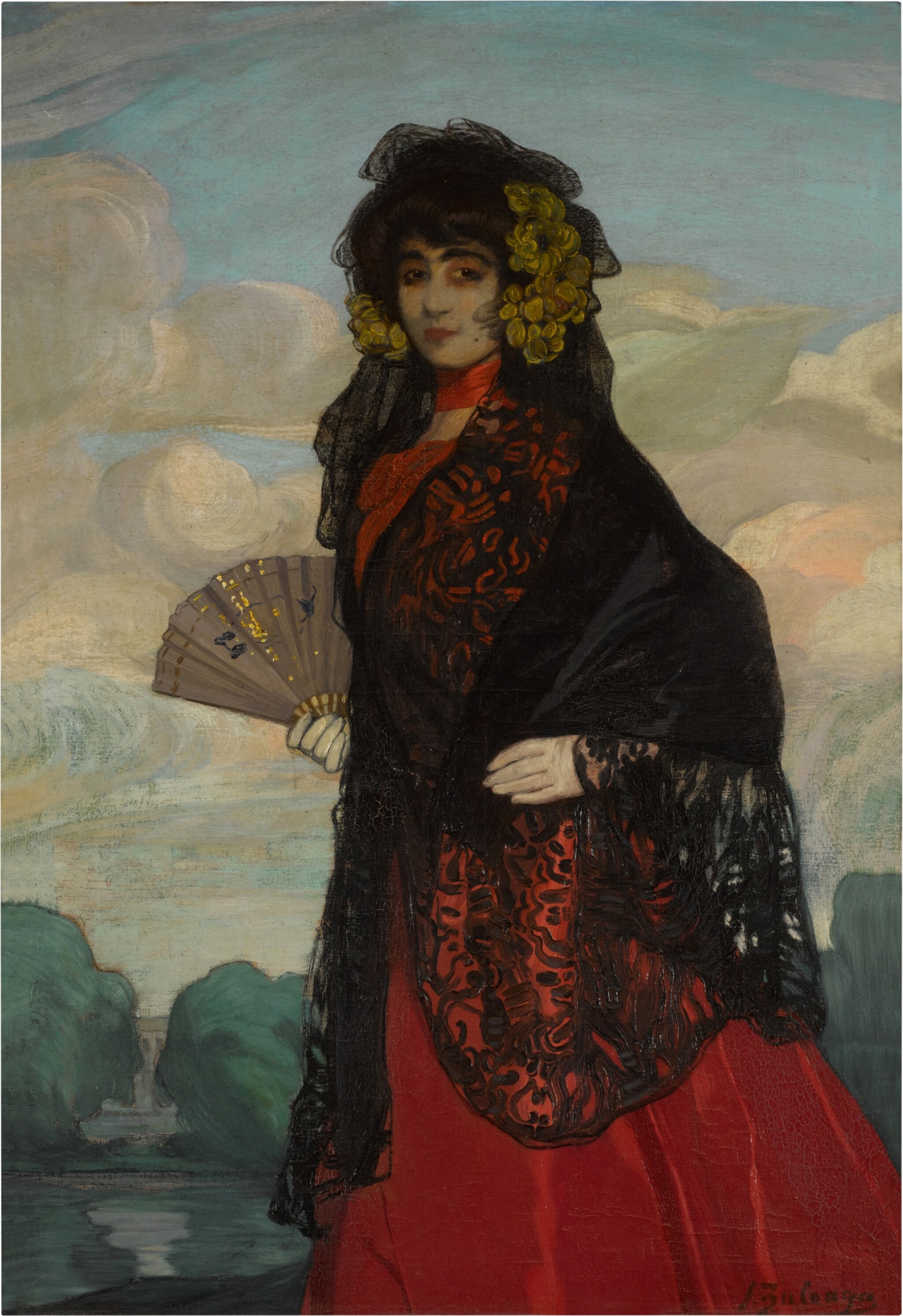 The canvas is unlined. The paint surface is stable and in good condition but soiled. Frame abrasions to all edges. Horizontal stretcher bar impression across center. Patterns of craquelure throughout. Under UV light, retouching to aforementioned abrasions and craquelure, to the figure's face and waist, and to the sky.

Faltis Collection, Vienna
Galería Popy Alegría, San Juan
Acquired by the mother of the present owner from the above circa 1950
E. Lafuente-Ferrari, La vida y el arte de Ignacio Zuloaga, San Sebastian, 1950, p. 229, no. 302 (listed as Candida de Rojo)
Ignacio Zuloaga y Zaballeta was born in the city of Eibar in the Spanish Basque country as the son of a respected damascene metalworker and grandson of the director of the Royal Armory in Madrid. Accompanying his father on a trip to Rome, Zuloaga decided to become a painter instead of learning the family trade. In 1889, the young man moved to Paris to study under Eugène Carrière in his studio in Montmartre. Living with fellow Spaniards Santiago Rusiñol and Pablo Uranga, the young man quickly became a central figure in the artistic capital gathering around him a crowd of influential friends such Edgar Degas, Paul Gaugin and Henri de Toulouse-Lautrec amongst others. After submitting pictures to the Paris Salon but finding mediocre success in France and London, the young artist returned to Spain settling in Seville and later Segovia. Returning to his native land would turn out to be a turning point in his career as there Zuloaga would develop a very personal pictorial style influenced by the Spanish realist tradition of Velasquez, Goya and Murillo. With his recognizable earthy palette of muted tones of black, grey, mauve, brown and maroon, he would depict typically Spanish genre scenes representing a variety of locals ranging from distinguished bullfighters and elegant gypsy flamenco dancers to obscure village dwarves, beggars, witches and also members of his own family, often placing them before backgrounds of landscapes and towns. The proud model standing tall depicted on the present work is Candida Zuloaga, the artist’s first-degree cousin and favorite model whom he would paint over 20 times. Candida remained single all her life running the family business exemplifying the independent and modern woman in Spain’s fervently catholic society. The mantilla shawl and fan, accessories so often present in Zuloaga’s portraits of women, anchor the portrait in the Spanish tradition of the proud Maja. Zuloaga’s decision to focus on scenes from everyday Spanish life characterizes the ideals of the Generación del 98. In the wake of Spain’s loss of her vast colonial empire at the end of the Spanish American War in 1898, many artists and intellectuals aimed to capture what they felt to be the very essence of Spain and its people in a noble, yet unidealized way. With his career taking off, Zuloaga would spend his time between Spain and Paris where the renowned galleries Georges Petit and Bernheim-Jeune would play a central role in promoting his work. More and more in demand, Zuloaga would participate in exhibitions all over Europe. With the Duke of Alba commissioning the artist to paint his family, the doors to a new clientele, that of the Spanish aristocracy, were now open to him and his reputation as the finest portraitist of Spain confirmed.