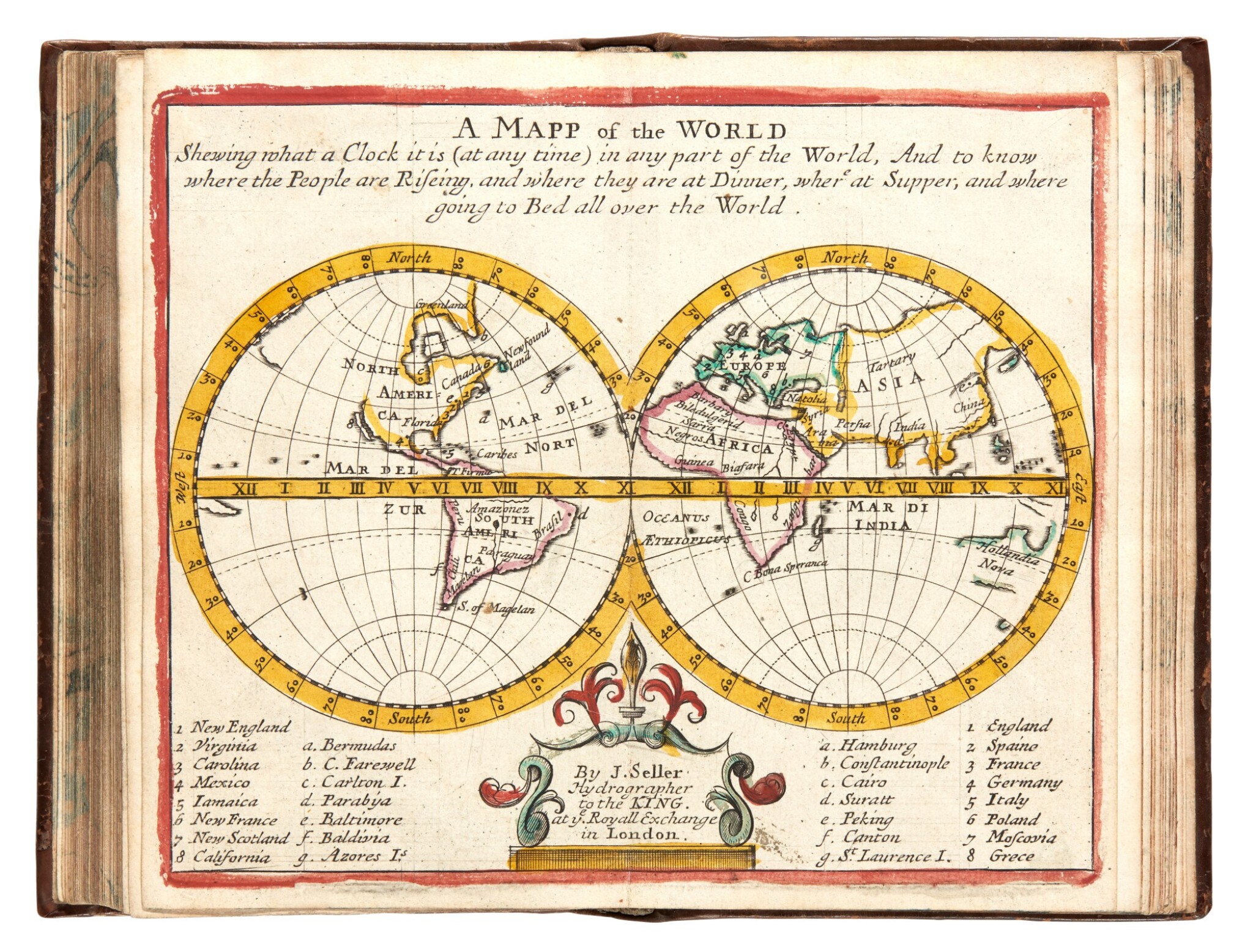 A Pocket Book containing several Choice Collections in Arithmetick, Navigation, Astronomy, Astrology, Geometry, Geography, Surveying, Measuring, Dialling, Gageing. London: Sold by him [John Seller] at the Hermitage in Wapping and at his Shoop in Pope's head Alley in Cornhill, [1676]

RARE. THE WARDINGTON COPY. Seller's Pocket Book is a vade-mecum for English gentlemen, a compendium of useful information for every occasion, with an impressively wide-ranging series of tables including, among others, monthly almanacs, calendars, lists of the Kings of England and Lord Mayors of London, feast days, tables to calculate Easter and the full moon, tables of astronomy, trigonometry, geometry, weights and measures, and even a table to calculate how many bricks would be needed to make a wall. One of the most uncommon of the plates is a double-page engraving explaining Edward Coleman’s system of cyphers.

Two of the maps are double-page: A Mapp of the World Shewing what a Clock it is (at any time) in any part of the World, and A Traveling Mapp of England. & Dominon of Wales. The world map has an accompanying full-page leaf with rotating overlay, and both seem to have been engraved for use in the Pocket Book.

The single-page maps are of the continents, each with an accompanying engraved table of the divisions (or countries/regions), first prepared for the Book of Geography, and its later edition the Atlas minimus.

For this third edition, the engraved title-page has been re-engraved, inserting Seller’s shop address at the Hermitage Stairs in Wapping, with his shop address in Cornhill dateable between 1678 and 1681.

This is an early issue of the third edition, with all but one of the monthly almanac leaves in the first state, and without the double-page engraved plates from the Atlas Coelestis [1680], found in other examples of this edition, but with the double-page plate with a table to calculate the day of the new and full moon re-engraved for the years 1680–1700 (but actually only showing 1680 to 1692), this accomplished simply by engraving over the superfluous left hand columns.