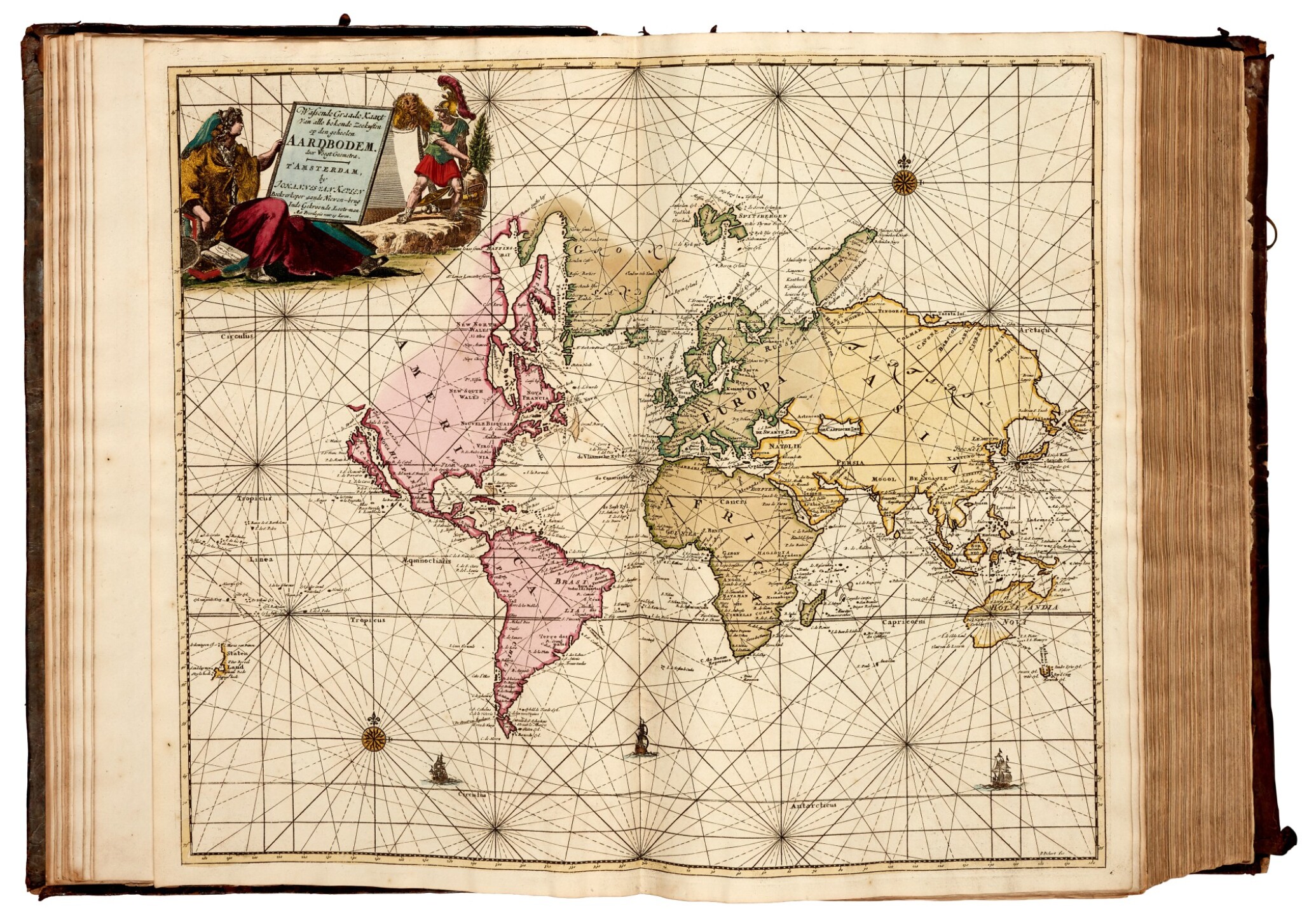 "THE MOST COMPLETE SEA-ATLAS BY THE VAN KEULENS, COMPOSED OF NEARLY ALL THE CHARTS PUBLISHED UP TO THE DATE 1709" (Koeman).

This atlas collates as Koeman's Keu 28 with the following exceptions: the French letterpress title here is dated 1709 rather than 1707; in Part 2 charts (55)+(56) have been joined to form a large folding chart; charts (60) and (61) have been replaced by "Nouvelle carte marine Generale croissant ende-Grés du Canal ... A New General and Gradual increasing Compass Map of the Channel ..."; chart (86) has been replaced with "Paskaert van Cales tot Cadiz ..."; chart (97) has been replaced with "Pascaart van de kust van Portugal"; and there is an additional chart after (105) titled "Nieuwe Pascaert vande kust van Maroca en Zanhaga"; in Part 3 chart (111) has been updated with "Nieuwe paskaart van t'opkomender Straat Gibralter ..." ; and two pairs of charts have been joined: (126)+(129), and (127)+(128) to form two large folding charts; and in Part 4 (136) has been replaced by "Paskaert waer in de graden der breedde over weder zyden ...".

The firm of van Keulen, active continuously from 1678 to 1885, was the largest private hydrographic chart-publishing agency in the world. Three generations of the family were active during the period when Amsterdam was at its height as a mercantile and shipping power. As a by-product of this, Amsterdam became the leading European centre of marine cartography, densely populated with the best chart-makers and publishers. Pre-eminent among these firms were the van Keulens who produced “the largest and finest marine atlases in Holland” (Koeman).

Johannes van Keulen (1654-1711) was the founder of the firm, enrolling in the booksellers’ guild in Amsterdam in 1678. In 1680 he published the first part of his Zee-Atlas, by which the reputation of the firm was established. Although the family business was closely tied to maritime publications, Johannes himself was not a chart-maker, but simply an interested publisher. He was fortunate that, from the outset, he employed the skilled surveyor Claes Janszoon Vooght, who actually prepared the charts and also wrote the text. Over the years the Zee-Atlas was expanded to five parts, and it continued in print, in one form or another, until 1734.

More ambitious, and with a far longer and more complicated history, was his pilot book, the Zee-Fakkel, which was first published in 1681-82, and continued in print to about 1800. The family also published books on every aspect of geography, navigation and nautical matters.

Johannes’s son Gerard (c. 1678-1727) gradually succeeded him from about 1704. In contrast to his father, Gerard was a talented engraver, mathematician, and chart-maker, whose abilities were recognised when he was appointed Hydrographer to the Dutch East India Company in 1714. Under his guidance, the Zee-Atlas and Zee-Fakkel were greatly revised and improved, and many new charts introduced. After Gerard’s relatively early death in 1727, he was succeeded by his widow and later by his son Johannes II who is known in particular for publishing the sixth volume of the Zee-Fakkel – this volume contained the previously secret cartography of the East India Archipelago.