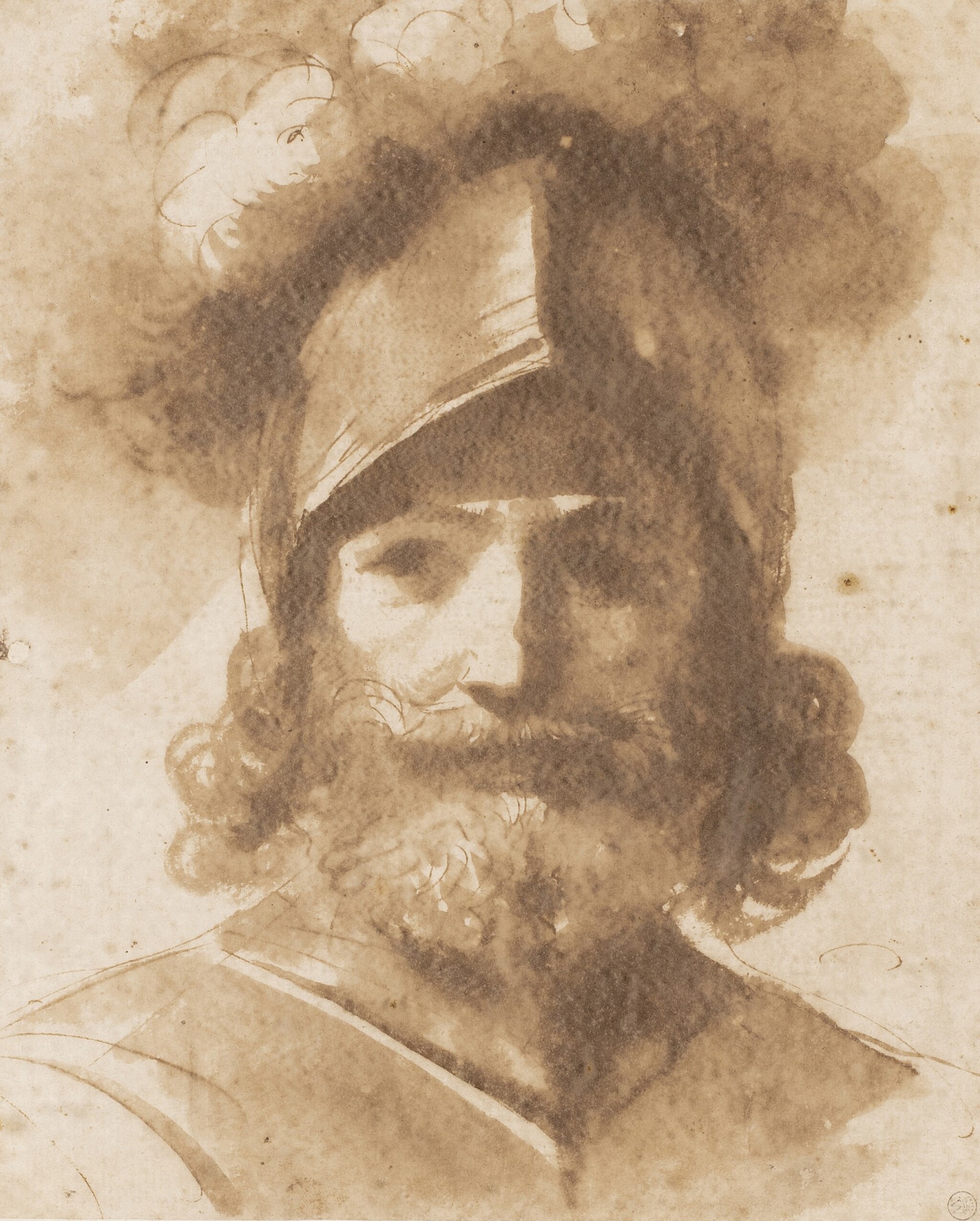 To request a condition report for this lot, please contact Lily.Bua@sothebys.com.

Bold, powerful and charismatic, this pen and ink and wash drawing of a warrior, in armor and wearing a plumed helmet, cannot be directly linked to one of Guercino’s paintings, but it is plausible that this grand study was intended for a figure of Mars or Argantes.

This drawing creates an enormous impact on its viewer. Not only does it almost fill the entire sheet on which it is drawn, but the predominant use of wash to render the figure, using only touches of pen and ink to provide definition, bestows an ethereal softness that contrasts with the preconceived military persona of a warrior. The soft gaze and partial turn of the lips, suggestive of a smile, also seems at odds with the ferocity and strength one imagines such a figure to possess.

In considering the present drawing’s connection with Guercino’s painted oeuvre, one can certainly find parallels in a number of his canvases, of which many feature soldier or warrior figures representing both historical and mythological worlds. An interesting comparison can be made with the figure of Mars in Guercino’s, Venus, Mars and Cupid, of 1633, now in the Galleria Estense, Modena.2  The similarities in the face, including the beard and moustache and in the plumed helmet, indicate this drawing may have been for a figure of Mars and this particular representation of the mythological warrior is perhaps the closest in stance, costume and facial appearance to our drawing. It should, however, be noted that the painting's dating of 1633 is at odds with the drawing's stylistic similarity with the aforementioned drawing of a warrior, in a private collection, which dates from the 1640s.

Another link may be drawn with Guercino’s paintings of Argantes, often confused with Mars, but as Nicholas Turner remarks, generally identified by the abundant plumes of his helmet.  Guercino’s painting of Argantes, dated circa 1645, in the Uffizi, Florence, depicts a warrior in a plumed helmet, who fills the composition, bust length and wielding a sword behind his head.3  It is also possible to draw comparisons between the present drawing and this painting, in its facial type, armor and the abundance of plumes billowing from the helmet, and the date of 1645 also fits better with the graphic style seen in the drawing.

Whilst a definitive connection with a particular commission remains elusive, this is undoubtedly a wonderful example of Guercino’s talent as a draughtsman, showing his virtuosity in creating vivid and lively subjects, expertly rendered in point of the brush and wash and using the paper to create marvelous chiaroscuro effects.