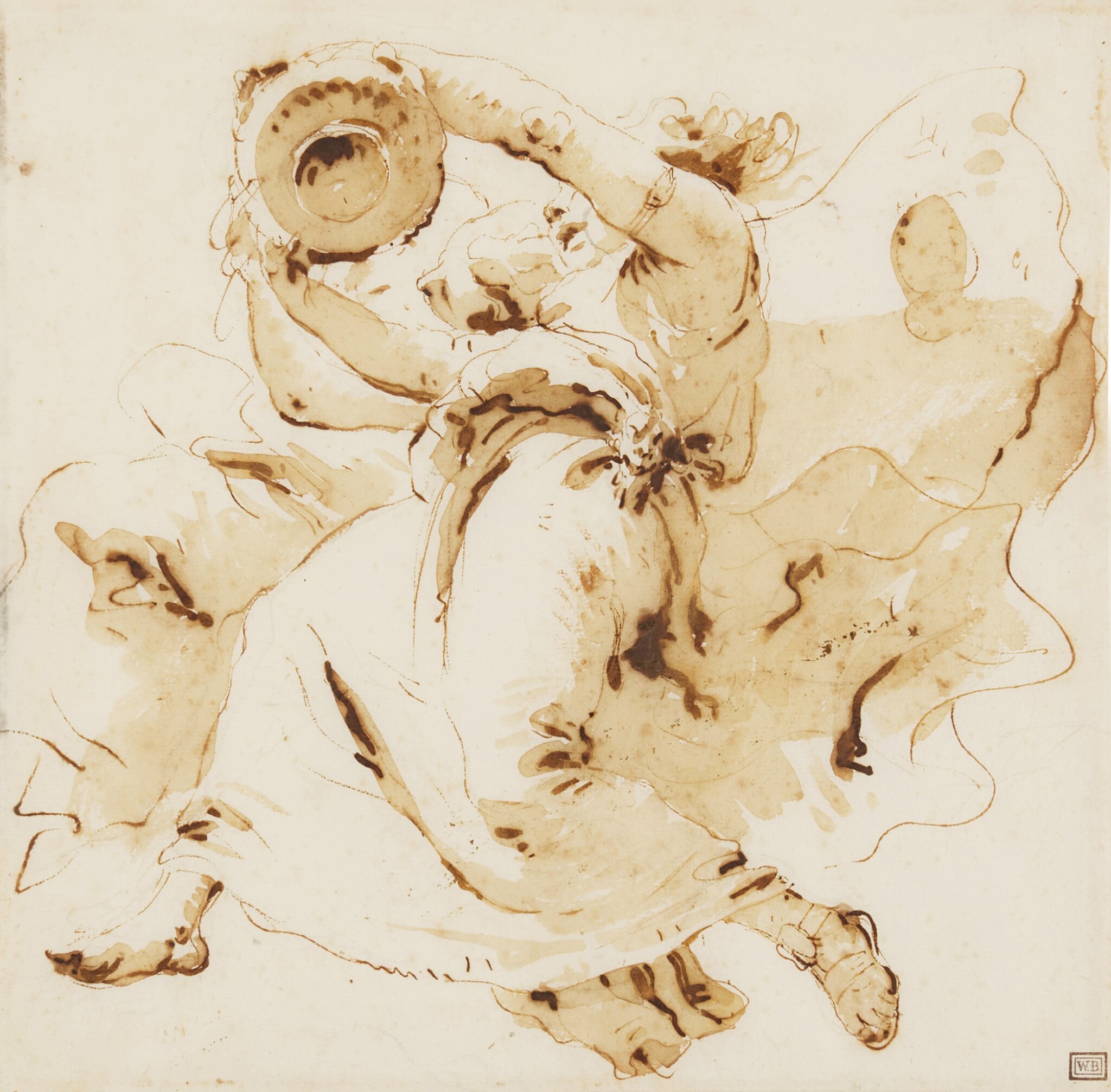 Pen and brown ink and wash over traces of black chalk

Window mounted. Overall in very good condition, apart from some light brown staining in narrow band along parts of left and upper edges of sheet (more visible than in catalogue illustration). Sheet otherwise relatively clean and free from staining, and media strong and vibrant.

The present study depicting two Zephyrs carrying a vase and the following lot, showing two figures seen from below, are stylistically comparable with Giovanni Battista’s drawings for the ceiling fresco in the Gallery of Palazzo Clerici, Milan, painted circa 1740.

Beautiful and elegant, this extremely original study of two Zephyrs seems to move before our very eyes. Tiepolo’s genius in creating movement through his rapidly applied pen strokes and strategically, but seemingly spontaneous, placement of wash, guarantees the sense of immediacy and spirit are retained, centuries after the drawing’s execution. Tiepolo’s studies for Palazzo Clerici all possess the same lightness and freedom, achieved with underdrawings in black chalk and embellishments in pen and ink and wash. The apparent simplicity and rapidity of these aesthetically seductive studies are at odds with the complexities of the Clerici ceiling design. The Palazzo, as described by William Barcham in his 2016 Eugene Thaw lecture on the drawings for Palazzo Clerici, had a long gallery, the ceiling of which could not be seen in its entirety from a single viewpoint, but instead unrolled overhead in a scroll-like manner.1  Barcham explores the preparatory studies that survive for the ceiling and considers how Tiepolo responded to this daunting assignment through the many figure groupings for the vault. The extreme foreshortening employed in the figures in lot 30 reveal the challenges in perfecting the trompe l'oeil effects within this complex commission.

While no definitive links can be made between the figures in this drawing or those in lot 30 and the finished ceiling in Palazzo Clerici, the distinct style and foreshortening seen in both sheets is very similar to the surviving drawings for this project, many of which grace important private and institutional collections, including The Metropolitan Museum, New York, The Morgan Library and Museum, New York, The Fondazione Horne, Florence, the Ecole des Beaux-Arts, Paris and the Graphische Sammlung, Stuttgart.

Figures seen from below are abundant in Giovanni Battista’s graphic output, with many connected to fresco decorations for various palazzi, but many are also independent works, demonstrating Tiepolo’s endlessly inventive and effortless exploration of the various themes that fascinated him. One of these experimental series consists of the so-called ‘sole figure per soffiti,’ depicting many variations of single figures seen from below (‘di sotto in su’). The present studies may have originally been part of a large group of drawings preserved in an album entitled Vari Pensieri, which the artist is said to have given to his son, Giuseppe Maria, a priest attached to the order of the Somaschi at S. Maria della Salute; that collection seems to have been broken up some time after 1885.