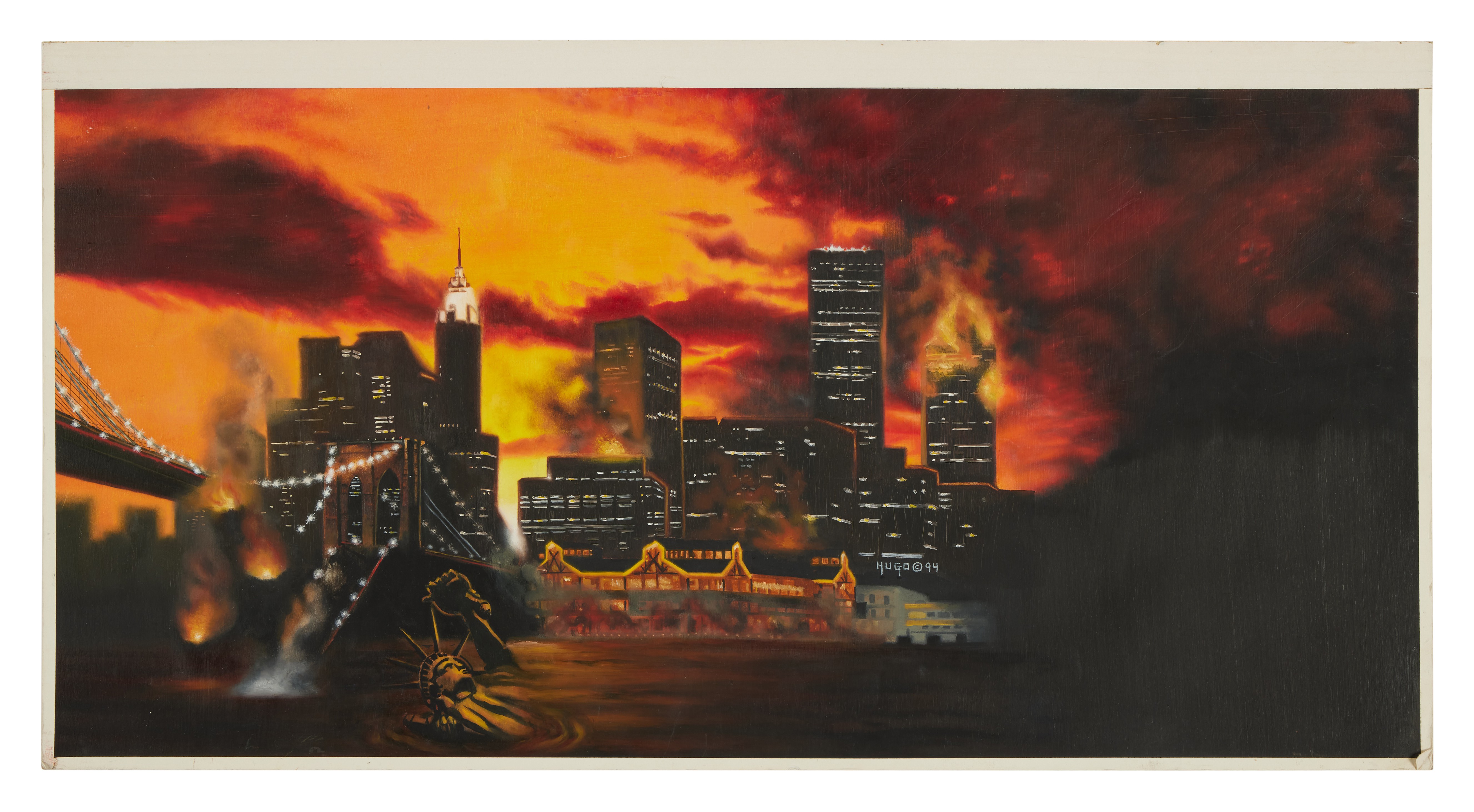 The debut album of Brooklyn-based rapper, Jeru the Damaja, The Sun Rises in the East, is considered one of the most influential works to contribute to the revival of East Coast Hip Hop. Produced by DJ Premier and released in May of 1994 on Payday Records—just one year after the World Trade Center in New York City was bombed—the album cover featured a seated Damaja at the ready while the famous Manhattan skyline burns in fiery tones of red and orange behind him, the Statue of Liberty floating in the river. It's a bold and foreboding choice for an album cover, and artist Hugo Bravo, who executed the concept art comprising the current lot, pulled no punches when it came to presenting the rapper as worthy of riding the imagined apocalypse.

In addition to Bravo's original concept art for the cover, the lot also consists of the initial sketch by Bravo and the final version of the album cover, shot by Hip Hop storyteller, photographer Danny Hastings. Bravo recounts the origin of creating the final work used on the album's cover below:

"My good friend Danny Hastings approached me one day with the

opportunity to illustrate the next album cover for Jeru the Damaja, The Sun Rises In The East." Danny said he wanted to combine an illustration with his photo for the cover. So I began to listen to the tracks on the album and one set of lyrics stood out to me from the track called "Come Clean" which were "Don't provoke the wrath of this rhyme inventor, cause I blow up spots like the World Trade Center."

I felt those lyrics depicted a very strong visual and began sketching ideas for how to interpret them. So I came up with the idea of an apocalyptic New York City in which the World Trade Center was on fire along with the South Street Seaport, the Brooklyn Bridge had collapsed, and the Statue of Liberty was floating in the East River. I showed Danny the concept and he showed it to Jeru and his team and I was given the green light to proceed to paint. And the rest, as they say, "was history"." (Hugo Bravo)

In May of 2019, writer Jesse Ducker revisited The Sun Rises in the East for its 25th anniversary on Albumism, outlining the style and strength of the Damaja and the album's successful output:

"With The Sun Rises, Jeru gives a performance that is steeped in both street-wise, rugged rhymes and a healthy dose of righteous aggression. His rhymes are laden with references to Kung-Fu flicks like Man With The Bronze Arm and anime like Fist Of The North Star. His delivery is unconventional, with its constant shifts in tempo, riding Premier’s beats in an unorthodox manner.

Earlier in 1994, DJ Premier may have begun to make his case for best producer out there with Hard To Earn, but he cemented his case with The Sun Rises In the East. While Primo rewrote the book for hardcore boom-bap production the former, the latter remains his most creative endeavor. The tracks he crafts for Jeru are the products of hours and hours the duo spent pouring through his crates, research that ultimately yielded his most left-of-center constructions, in terms of his sound and approach."

Hugo Bravo has been a freelance Illustrator since 1992. He was educated as an oil painter at the Fashion Institute of Technology in New York City and upon graduating, immersed himself in the dynamic art scene of the early 1990s. He became a member of the artist collective SOL Concepts and participated in group exhibitions while working for the independent film industry as a storyboard artist, scenic artist, and art director.

Balancing modern concepts with classical realism, Bravo's work is heavily influenced by both Old Master painters and illustration art, infusing his oeuvre with a dream-like sensibility grounded in the personal. His work spans a variety of genres, including comics, film, advertising, portraits and cover art for novels such as the Redeem The Knight series by author David V. Mammina. His works have been exhibited at Illuxcon, New York Comic Con, Philadelphia Comic Con, and in numerous private galleries and is held in a number of private collections.

Courtesy of the artist and photographer