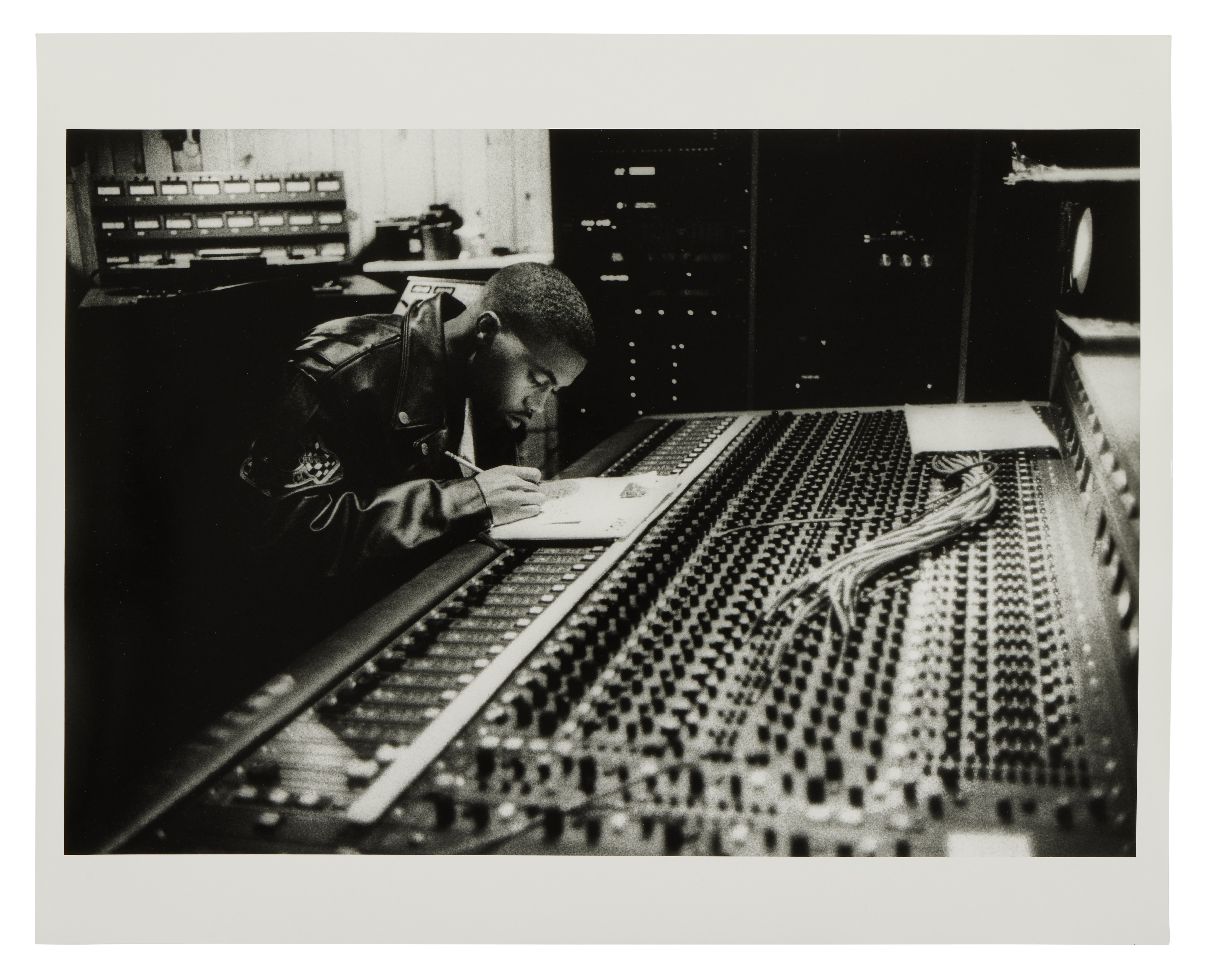 Number one of an edition of 5, signed by Kwon.

NAS CAPTURED AT THE MIXING BOARD IN THE STUDIO

Through her commercial—yet nonetheless intimate—work, Kwon earned the trust of and access to artists like the the Wu-Tang Clan, Ice Cube, Big Pun, Fat Joe, Jay-Z, A Tribe Called Quest, Eminem, the late Biggie Smalls, and Nas, the subject of the current lot. Kwon reflects about the shoot below, in which the preoccupied Nas works at the mixing console in a recording studio:

"In my experience, Nas was the first Hip Hop artist I saw to wear a Biker jacket. I recall noticing it immediately as he entered the studio to record for Flex’s album, The Mix Tape, Vol. II. I asked if he wouldn’t mind keeping it on as I thought it would be striking against the studio equipment and, of course, it looked great on him." (Sue Kwon)

The New Yorker reviewed Rap is Risen and Kwon's contributions to the culture in their February 2022 issue in an article titled "When Hip Hop Was Young." Below, writer Hua Hsu sums up what makes Kwon and her body of work with these artists so powerful and so unique:

"On occasion, it could feel like the writer and photographer were telling two different stories, and we each had a limited amount of time to get what we needed. The photographer was trying to catch the artist as stoic and powerful, not as someone puzzling for novel answers to my generic questions. Smartphones and laptops have streamlined the process of making and distributing images, as well as music. Looking at Kwon’s photographs, my eye was drawn to the details that root her subjects in the past. A sheet of paper on a mixing board, where the rapper and producer Pete Rock lists all the presets for the tracks he is fine-tuning. Kool DJ Red Alert in a radio broadcast station, looking frazzled but energized, surrounded by twelve-inch singles and carts, trying to figure out what to play next."

In addition to her hometown of New York City, Kwon's work has been internationally exhibited in Tokyo, Paris, Copenhagen, Modena, and London, and is in the public collections of The Rock & Roll Hall of Fame Museum, the Alex Katz Foundation, the Smithsonian National Museum of African American History and Culture, and the Museum of Fine Arts, Boston. Speaking not only to lovers and stalwarts of Hip Hop and the explosion of culture and artistry it birthed, Kwon's work is a case study in capturing the intimacy of portraiture and respecting the world you have been granted access to, and in the case of the current lot, witnessing their intimate focus as they produce the musical fruits of their behind-the-scenes labor.