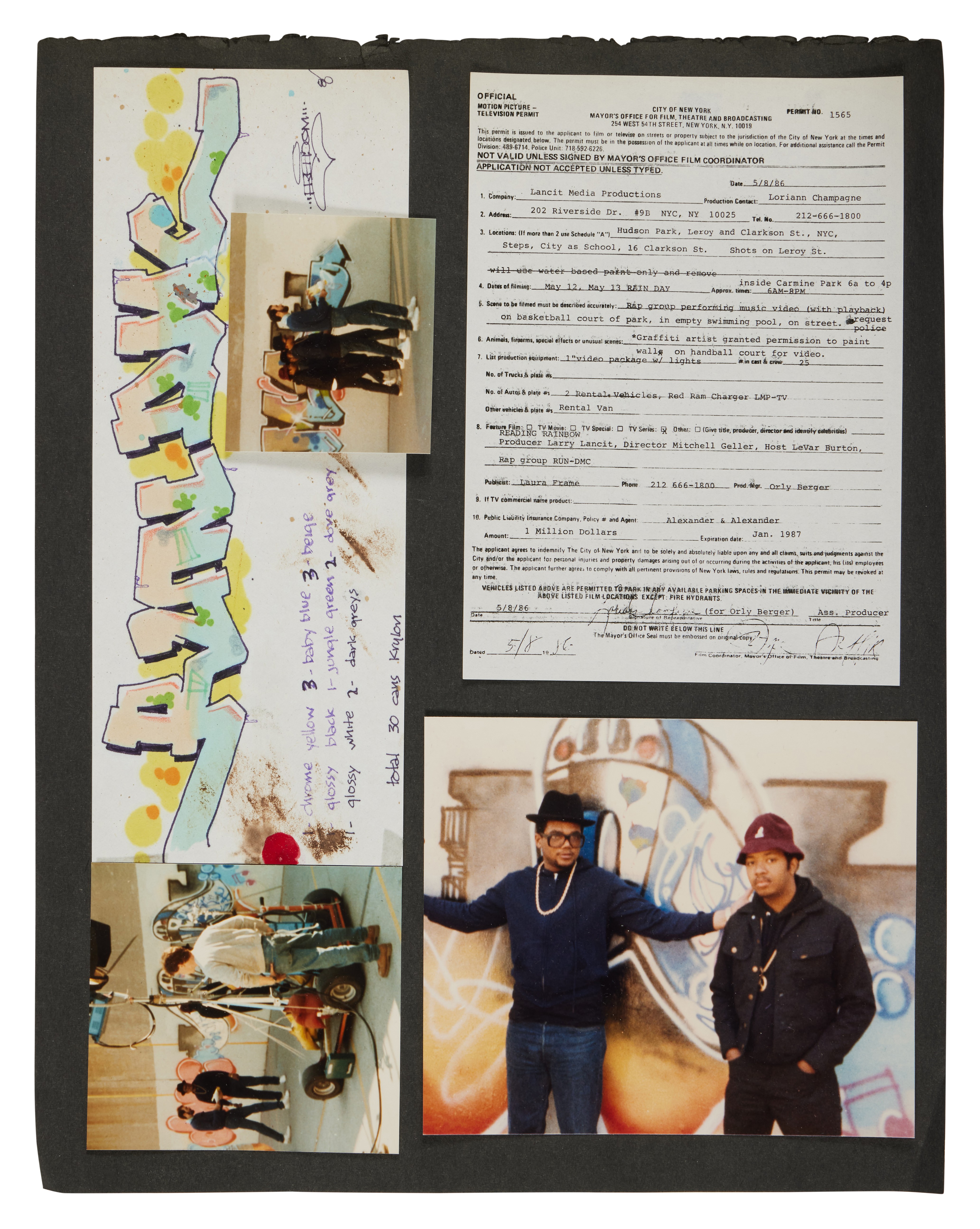 Original black book study executed in ink and wash for Run-DMC's mural for their appearance on Reading Rainbow, circa 1986, signed in ink at lower right "||Freedom|| / [heart device]" with notes on color choices and cans of Krylon needed at center left, the study approximately 5 by 11 in. (12.7 x 27.9 cm.), tacked together on black paper with photocopies of photographs of Run-DMC standing in front of the complete mural and a photocopy of the Official Motion Picture-Television Permit issued to Lancit Media Productions for episode filming, overall dimensions 10¾ by 14¾ in. (27.3 x 37.5 cm.)

Best known for his numerous paintings in the abandoned Amtrak tunnel running underneath Manhattan's Riverside Park, legendary New York City graffiti artist Freedom (aka Chris Pape) began tagging subway cars in 1974 when he was only fourteen years-old. He first tagged himself as "Gen II" and then eventually adopted "Freedom"—the tunnel which bore his art would be aptly renamed The Freedom Tunnel—and was one of the first people to document the 'Mole People,' a homeless community living underground in the tunnel. In 1986, after tears of tagging alongside the best in the streets, Freedom received a call from the art director of the popular children's show Reading Rainbow. Their idea was for Freedom to create a mural for their upcoming episode which would feature Hip Hop royalty, Run-DMC.

Hip Hop and public television seemed like a particular kind of match made in heaven, and with Freedom's art, graffiti would be broadcast live, front and center, all over the country thanks to Run-DMC's popular appeal. Freedom recounts his experience creating the mural and the subsequent mania Run-DMC inspired with their appearance on the handball court for Beyond the Streets below:

"In 1986, I received a call from the art director at Reading Rainbow, a popular show on PBS at the time, asking me to paint six handball courts in one night for a Run-DMC video. I liked PBS, and I liked DMC so I took the job.⁠

The site was a playground in the West Village, close to where I lived. I had a few things lightly sketched out on paper. When I arrived at 8pm there were still people playing handball so I tried to work around them. CHRIS 217 and CLOUD 9 were both there to help with fill-ins, but I don’t remember giving them much direction. ⁠

At 2AM people started drifting through the playground. The first group I remember were the Beastie Boys, who were hanging out with CEY drinking 40’s. I had known CEY since the early 80s and enjoyed his company, but the Beastie Boys were loud, VERY LOUD. They could seemingly invent a party anywhere they went. Tonight was one of those party nights, highlighted by broken bottles, and freestyle rapping.⁠

At some point DOZE arrived. I handed him a can of paint and he walked around the playground doing throw ups, when the can was empty he left. CHRIS 217 left to go to work at 6am leaving me with CLOUD 9 and a few of the production people. Time was running out, I painted by myself as quickly as possible, finishing just as school kids started to arrive across the street. ⁠

When Run-DMC showed up, the school kids freaked out and raced over to the playground, which was now thick with rent-a-cops. There was a mob of two hundred kids stuck behind the fence chanting the group’s name. I said my hello’s to the group and left. The paintings lasted for one day, and were painted over by the Parks Department. The 1980s were like that.⁠"

Freedom currently lives and works in Brooklyn as a graffiti writer, archivist, author, documentarian, and historian.