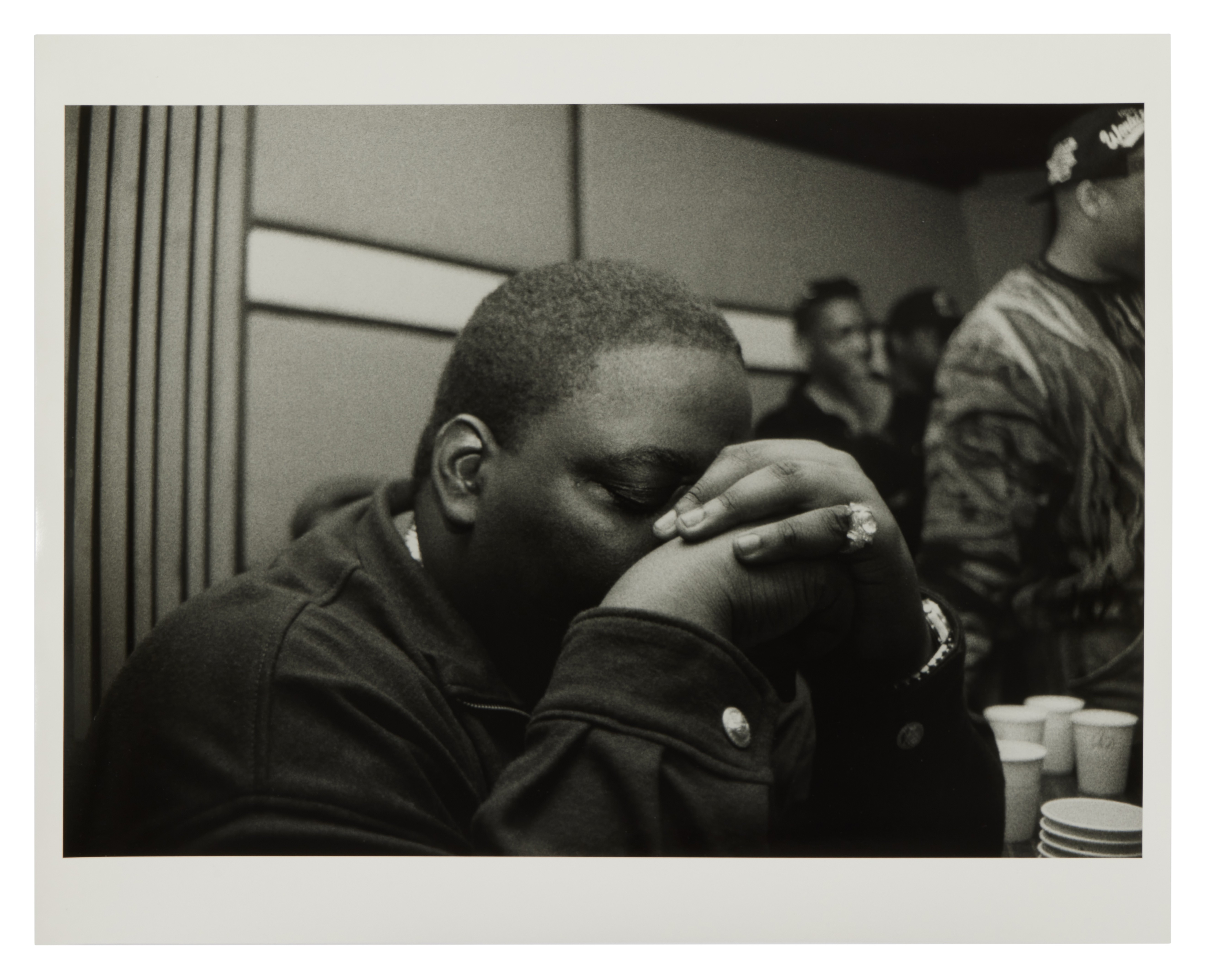 One of an edition of 5, signed by Kwon.

A PRIVATE MOMENT OF BIGGIE SMALLS HOLDING COURT IN THE STUDIO

Through her commercial—yet nonetheless intimate—work, Kwon earned the trust of and access to artists like the Wu-Tang Clan, Nas, Big Pun, Fat Joe, Jay-Z, A Tribe Called Quest, Eminem, and late Biggie Smalls, the subject of the current lot. Kwon reflects about the shoot below, in which a reflective Biggie has a seemingly private moment in the midst of his busy studio:

"Biggie was and still is one of the greats and I was beyond excited to get the chance to work with him. Dream Hampton had assigned me the shoot and I loved that it was going to be an opportunity to shoot him in a relaxed environment, documentary style. When I arrived at the studio, “Hypnotize” was blasting and I immediately got goose bumps - I will never forget this moment of hearing that song for the first time and seeing him sitting at the desk, holding court." (Sue Kwon)

The New Yorker reviewed Rap is Risen and Kwon's contributions to the culture in their February 2022 issue in an article titled "When Hip Hop Was Young." Below, writer Hua Hsu sums up the impact photographing Biggie had on Kwon's body of work:

"Among the most famous images of Kwon’s career are the ones she took of the Notorious B.I.G. less than two weeks before his death. Biggie holds court at Daddy’s House, a studio in Hell’s Kitchen that his friend and producer Sean Combs, then known as Puff Daddy, opened in the nineties. They are there for a listening session of “Life After Death.” Well-wishers laugh, sip Moët & Chandon, and pay their respects to the Brooklyn rapper. Surely, this album will secure his status as an all-time great. Biggie sits at the center of the room, and, at times, his face looks solemn—not a look of doubt, but a seriousness you’re not expecting in such a joyous setting. And then you remember: this is the moment before the moment. Nobody in the room knows what is about to happen, but they know they are listening to the music they have been waiting for their whole lives."

In addition to her hometown of New York City, Kwon's work has been internationally exhibited in Tokyo, Paris, Copenhagen, Modena, and London, and is in the public collections of The Rock & Roll Hall of Fame Museum, the Alex Katz Foundation, the Smithsonian National Museum of African American History and Culture, and the Museum of Fine Arts, Boston. Speaking not only to lovers and stalwarts of Hip Hop and the explosion of culture and artistry it birthed, Kwon's work is a case study in capturing the intimacy of portraiture and the multi-faceted character of the subject while respecting the world in which she had been granted access.