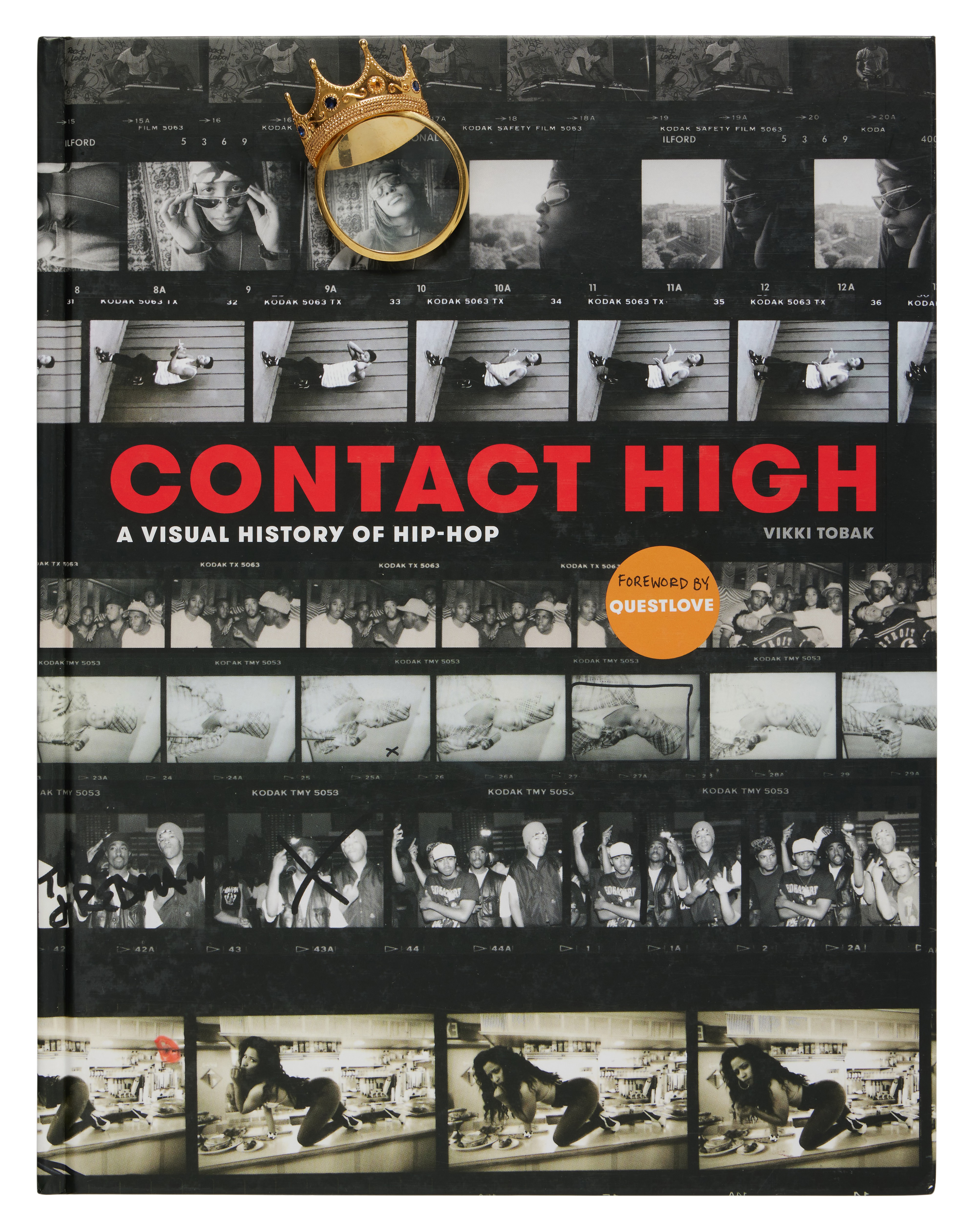 4to (13.25 by 10.25 in). 286pp. Original illustrated boards. Together with contact sheet and print (both 11 by 8½ in.) signed by Al Pereira and housed in custom folio. Book and folio housed together in custom slipcase. Signed and dated on half-title by Tobak in silver ink. Fine.

TOGETHER WITH: Original photographer's loupe custom made for the opening of the Jan. 2020 Contact High exhibit in NYC by Osamu Koyama aka Osa the Jeweler of Complete Technique. 18K gold-plated sterling silver in the form of Biggie's famous crown and glass (, 2½ by 2 in.), embellished with blue and yellow sapphires. Housed in a custom foam-lined carrying case.

1/1 ARTIST'S PROOF OF TOBAK'S CONTACT HIGH, SIGNED BY HER, TOGETHER WITH CONTACT SHEET AND PRINT SIGNED BY AL PEREIRA AND GOLD PLATES CUSTOM PHOTOGRAPHER'S LOUPE MADE FOR THE OPENING OF THE JAN. 2020 CONTACT HIGH EXHIBIT

Publishing plans for Contact High originally called for 5 different versions of limited editions of 50 each, each version with a different contact sheet and print.

Published in 2018, Contact High: A Visual History of Hip Hop began as an Instagram account in 2016 by the journalist, Vikki Tobak and was first presented in exhibition form at Photoville in Brooklyn. It was included in Time's listing of the "25 Best Photobooks of 2018," and spawned a number of exhibitions in museums such as The Annenberg Space for Photography in Los Angeles, The International Center for Photography in New York, Manarat Al Saadiyat in Abu Dabhi, and the Museum of Pop Culture in Seattle.

In Contact High, Tobak charts the evolution of hip hop and explores more than four decades worth of visual history through the lens of some of the genre's most famous images and photographers such as Lawrence Watson, Janette Beckman, Danny Hastings, Al Pereira, George Dubose, Danny Clinch, Barron Claiborne, and Brian "B+" Cross, among others.

Each of the photographers included and their subsequent works proved influential in chronicling the burgeoning scene of Hip Hop and how it not only became a popular musical genre, but a culture worthy of documentation and respect. It also offers insight into the collaborative process between the photographers of their subjects as they created some of the most famous visual content produced for mass distribution.

The current lot comprises not only a signed copy of the book from Tobak's own collection, but a unique memento of the project: a gold-plated sterling silver photographer's loop surmounted by a mini crown modeled after the one Biggie Smalls wore during his legendary 'King of New York' photo shoot with Barron Claiborne (sold in these rooms in 2020 for just under $600,000).

Tobak's work has appeared in outlets such as Complex, The Fader, Mass Appeal, Paper, i-D, Vibe, and the Detroit News and currently runs the Contact High Project.

Courtesy of the author