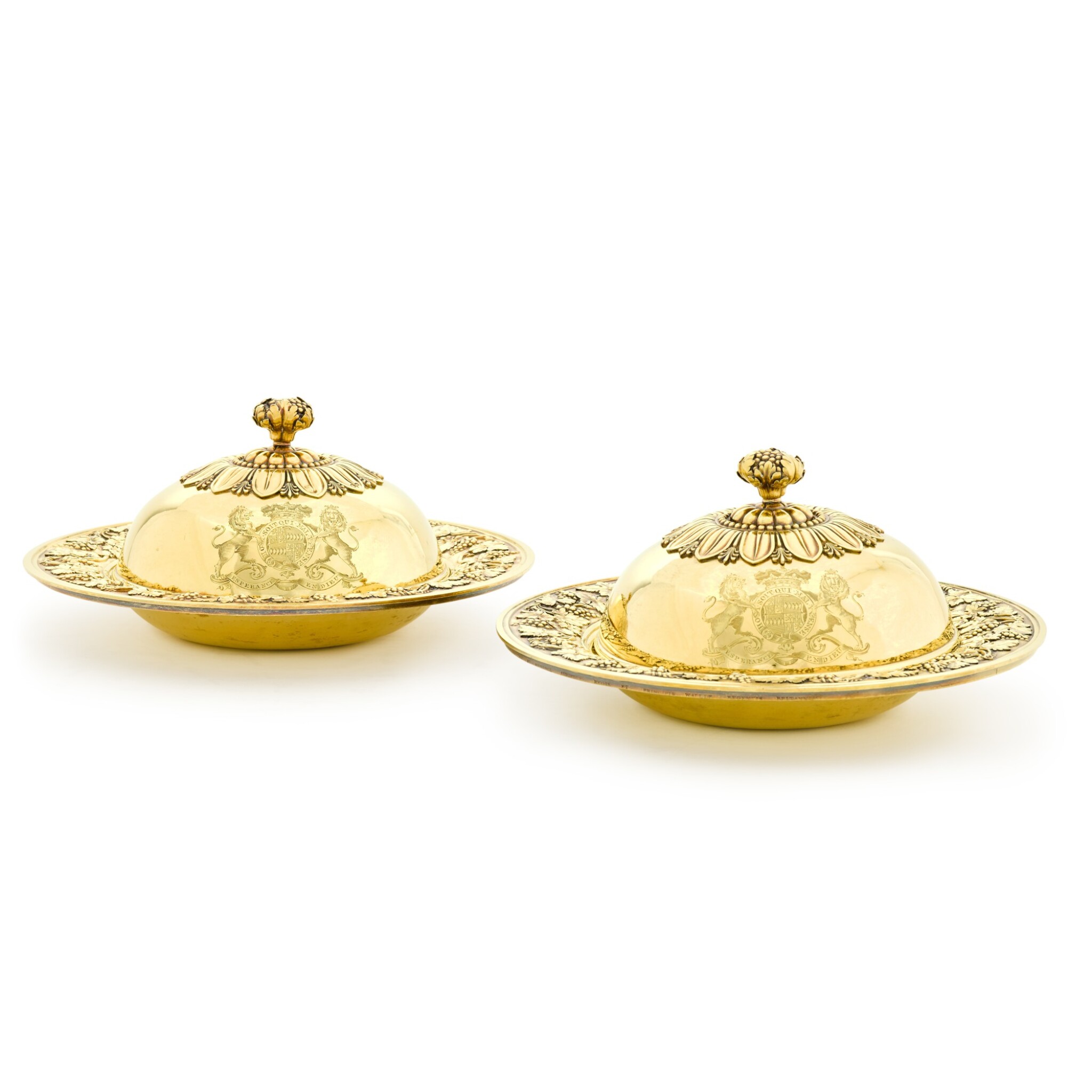 Hallmarks are clear to all parts.

The engraved arms and the detailing are crisp.

Some minor areas of uneven surface on the covers.

Some light wear to the gilding on the underside.

While the letters and papers in The Archives of the Duke of Northumberland explain that the dishes were 'to fit occasionally to the wine coolers', it is difficult to say for certain what they were designed to hold. As it must surely have been a cold dish a likely candidate is ice cream which was an extravagant luxury during the Regency period and would have been possible to make using the Duke’s ice house at Syon. This delicacy was enjoyed by the cream of society: on 18th January 1817 the Prince Regent hosted a banquet for the Grand Duke Nicolas of Russia at which his chef Antonin Carême created 121 dishes which were spread over nine courses; one of the many desserts was rose ice cream.

The already considerable collection of silver belonging to the Dukes of Northumberland was vastly augmented during the 1820s by the 3rd Duke. His preferred goldsmiths were Rundell, Bridge & Rundell of Ludgate Hill, who during the 1820s both refreshed his family plate as well as supplying a large amount of silver and silver-gilt. Among his first purchases in 1822 was the celebrated silver-gilt Shield of Achilles (one of an edition of five), after an original model by John Flaxman,1 for which Rundell’s provided a special mahogany display case, ‘with brass Apparatus, and a large convex glass Cover for do.’2The Duke put his plate to opulent use; he and his Duchess, a granddaughter of Robert Clive, 1st Baron Clive (Clive of India), entertained lavishly at their London mansion, Northumberland House and at Syon to the west of the capital, and again during his visit to France in 1825 and as Lord Lieutenant and Governor-General of Ireland in 1829/30.

In February 1825 Northumberland was appointed George IV’s Ambassador Extraordinary on the occasion of the Coronation of Charles X, King of France.3 The event and particularly the Duke’s appearance, ‘pre-eminent for splendour and magnificence,’ in France were heavily reported in the British Press. ‘His Grace spares no expense to sustain the dignity of the high and exalted character he will have to represent upon the occasion; and, highly to the credit of a wealthy and ancient Nobleman, he has declined accepting any pecuniary remuneration from his Majesty’s Government. On the other hand, the Government have determined on presenting his Grace with a magnificent and costly sword, said to be of the value of 10,000£., which is now in a great state of forwardness, at the house of Rundell and Bridge. It is to be ornamented with diamonds, &c.’4 The Northumberland plate alone which the Duke took with him to France was insured for £120,000 besides a like sum for his jewels and another £60,000 for the Duchess’s jewellery.5

It was said that the Duke was poplar in France, one writer suggesting that it was because he was seen literally ‘throwing his money about. . . . This mode would not do in some countries, but there it answers very well. When the Duke went from Calais, he showered handsfull of half-franc pieces to the crowd assembled round the post houses: this generosity led to a report that he was the brother of George the Fourth, for they did not conceive it possible that any other than a frêre du Roi could scatter about half-franc pieces.’6

Exaggeration or not, the events surrounding Charles X’s Coronation at Rheims and the Duke of Northumberland’s extravagant ambassadorship clearly fascinated a gossip-hungry public at home. So much so that the rival theatres of Drury Lane and Covent Garden staged spectacular re-enactments of the event to houses ‘crowded to suffocation.’ At Covent Garden ‘CHARLES KEMBLE actually condescends to walk as the KING OF FRANCE, and several other principal performers represent in dumb show the Peers and Prelates of the day.’7

Whether any of the actors dared to impersonate the Duke is unknown, but his munificence in 1825 was long remembered. One of his obituaries in 1847 reminded readers that on that occasion he had ‘astonished the continental nobility by the magnitude of his retinue, the gorgeousness of his equipages, and the profuseness of his liberality, casting far into the shade the representatives of the other European Powers.’8 And no small part of this ‘gorgeousness’ was his Grace’s superb collection of silver-gilt, so ably made under the auspices of and supplied by Rundell, Bridge & Rundell.