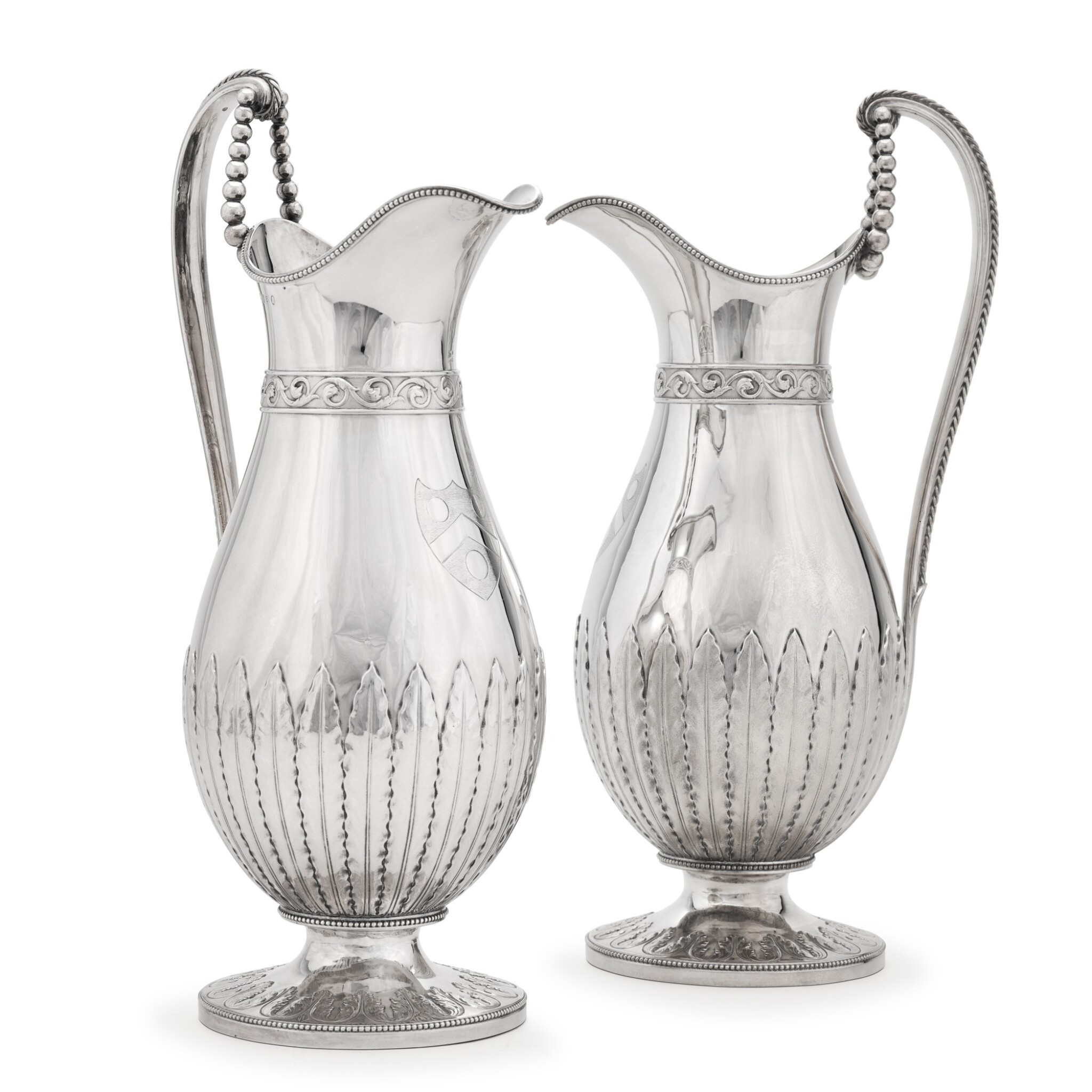 The baluster bodies with rising stiff leaf ornament and a band of scrolling foliage near the lip, the handle with rope-twist spine and hanging bead attachment, the base with acanthus leaf chasing, engraved with a coat-of-arms (azure, a chevron argent between three plates)

Please note that the W symbol has been removed from this lot. This lot will remain in New Bond Street after the sale.

Peter Podio entered his first mark in partnership with Abraham Peterson on 1 May 1783, giving their address as 23 Primrose Hill, Salisbury Square, Fleet Street.1 The fact that he was one of the witnesses at Peterson’s marriage with Elizabeth Alsop at St. James’s, Piccadilly on 23 September 1770 (when he signed the register ‘Pieter Podio’) suggests that he was in London well over a decade before 1783.

Furthermore, Podio (‘Piter Podio'), married Hannah Alsop at St. James’s, Piccadilly on 3 April 1774, which poses the possibility that he and Peterson were brothers-in-law. A clue to Podio’s origins – perhaps a native of Italy - is suggested by the following advertisement which appeared in The Public Advertiser in January 1774.2

‘WHEREAS DOMINICK PODIO, Native of Turin, Working Silversmith, did on Friday 14th Instant, carry off near Two Hundred Ounces of Silver, from the Dwelling-house of Mr. Henry Morris,3 No. 82, Fleet-street, and on Sunday the 16th, set off in a Post Chaise from the Plow-Inn, Prince’s-street, Piccadilly, for Dover.

‘Whoever will apprehend the said Dominick Podio shall on Conviction receive from Mr. Morris Ten Guineas Reward.

‘N.B. He is of a dark Complexion, wears his own black Hair, about five Feet eight Inches high, and aged between Thirty and Forty, had on when he set off an orange Colour Suit of Cloaths, and a brown Bath Beaver Great Coat, with a Crimson and Velvet Collar.’

Although no further information has as yet come to light about this Dominick, it is likely that he and Peter Podio were kinsmen.

Peterson and Podio were still in partnership in the Spring of 1788 but appear to have dissolved their arrangement soon afterwards.5

‘Tuesday evening about ten o’clock, an attempt was made to rob the dwelling-house of Messrs. Peterson and Podio, silversmiths, Primrose-hill, Salisbury-court, by two fellows with dark lanterns, who had contrived to get on the top of the house, and endeavoured to force their way through a casement window; but being luckily seen by some of the neighbours who happened to be looking out of their windows, an alarm was given, and the rascals, though immediately and narrowly sought after, found means to make their escape.’6

Podio’s second mark was entered alone on 12 February 1790, giving his address as King Edward Street, Bridewell Precinct.7 Two other children were born to Peter and Hannah Podio, both of whom were baptised at Bridewell Chapel in the City of London: Francis Charles Podio, born January (1788), baptised 11 February 1788; and Thomas Frederick Podio, born 16 August 1788, baptised 14 September 1788.

By the summer of 1799 Podio had moved to 23 Kirby Street, Hatton Garden, when his wife, Hannah died; she was buried on 17 June at St. Andrew, Holborn. This move to Hatton Garden is confirmed by Holden’s Triennial Directory, 1805-1807, in which Podio is described as a silversmith of 23 Kirby Street. This is the last mention of Peter Podio, unless the ‘Mr. Podio’ who was buried at St. Dunstan and All Saints, Stepney, on 26 March 1817, was he.

5. For further information about Peterson, see Grimwade, p. 621. He married his second wife, Mary Riggs, at St. Olave, Hart Street, City of London on 8 February 1798. He eventually moved to Horse Shoe Court (adjacent to part of the premises of Rundell, Bridge & Rundell), Ludgate Hill, where he died in 1812 (will signed 24 October 1808, proved 18 July 1812, National Archives, Kew, PROB 11/1535). Local rate books for the ward of Farringdon Without (which included Horse Shoe Court) show that he was replaced in 1813 by Ann Peterson who in turn was replaced in 1821 by ‘Mary Peterson (Abm. Peterson),’ latterly ‘Mary Patterson.’ By 1835, when Horse Shoe Court had been renamed Naked Boy Court, Mary Patterson’s property was described as empty.