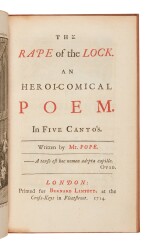 The Rape of the Lock. An heroi-comical poem. In five canto's. London: Bernard Lintott, 1714

First separate edition of Pope's poem (with pp.29, 44 and 45 misnumbered). Having first been published as two cantos in 1712 in Miscellaneous Poems and Translations, Lintott paid Pope £15 for "additions" to the poem, which was then issued in this first separate edition and in a large paper edition. The decorative setting with engraved initials, and head- and tail-pieces was unusual for octavo poems of this period.

Published on 4 March 1714, the first separate edition of Pope's Rape of the Lock sold 3,000 copies in four days, and was rapidly reprinted, "tho' not in so fair a manner as the first impression" (Pope's letter to John Caryll, 12 March 1714).