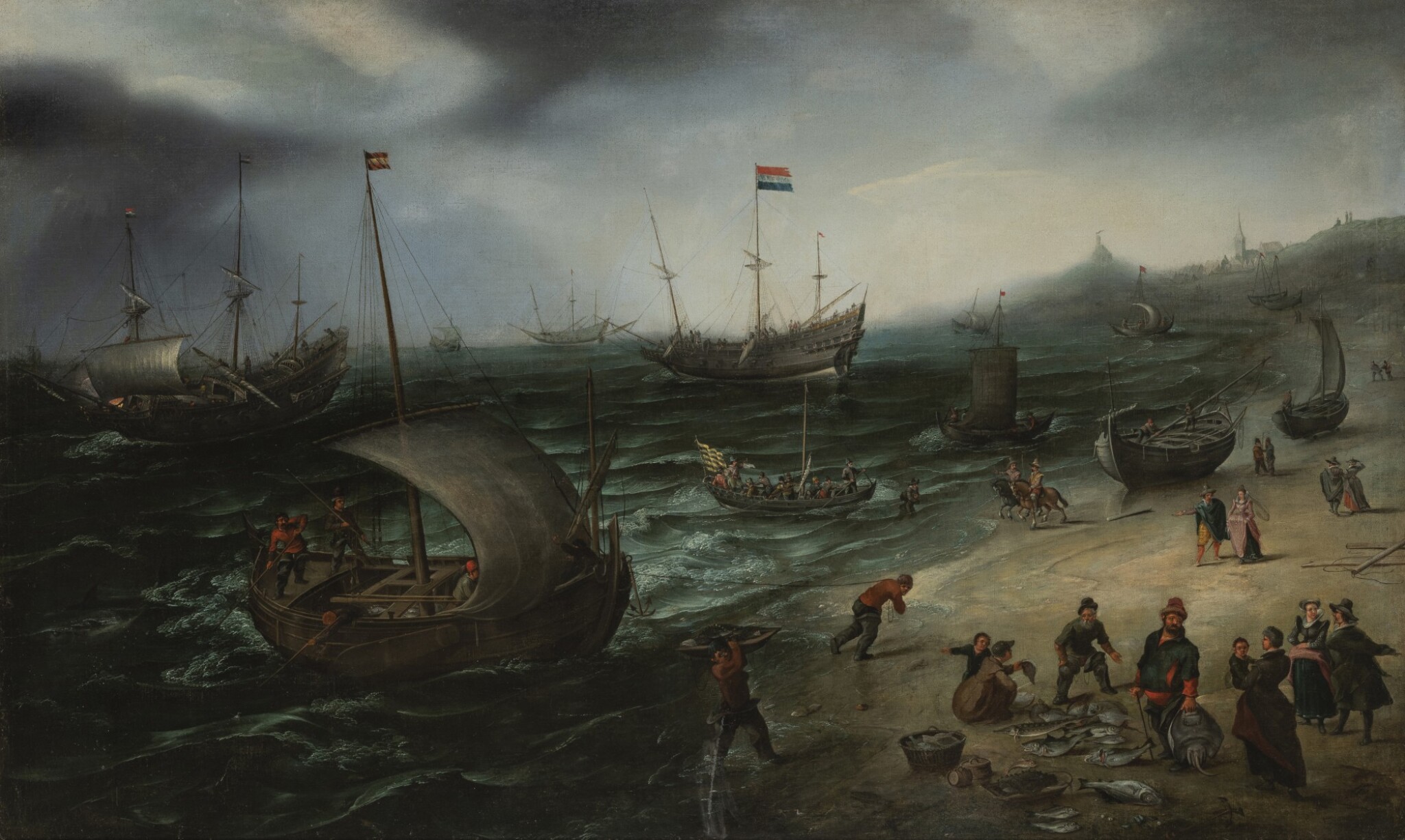 The fishing fleet coming ashore at Scheveningen, their unloaded catch displayed for sale, and a whaler and a man o' war in the offing

signed and dated on the flag upper centre: VROOM/ 1607

Oil on canvas, in a modern wooden ripple moulded frame in good condition

The painting is lined and there is very strong adhesion between the original canvas and the lining fabric; good tension is maintained throughout.

The paint layer is stable and secure.

Throughout the composition the original fine canvas weave can be detected through the paint layer; this is manifest in the sky, in particular, by the presence of many fine dark spots denoting ‘ topped’ canvas. Significant mitigation of this can be detected and a loss of modelling in the sky has subsequently occurred.

Areas of this applied restoration is not sympathetic and is excessive.

Pale canvas weave can be seen through the right mid ground and also to the darker areas of the sea lower left.

The paint to the figures is well preserved and fine details within the figures and the boats, in general, are intact.

Lively brushwork through the sea is retained and the highlights are original.

Chromatic integrity and the tonal values through the sea are well preserved allowing the atmospheric perspective through the composition to be retained.

Remains of a discoloured varnish is present in the darker passages and its removal would improve the overall tonality.

By inheritance to the present owners.

Hendrick Vroom was the first great marine painter, and the founder of the Netherlandish schools of marine painting. He had no forebears, and preceding depictions of marine subjects by Northern artists of which we are aware are scant: Frans Huys' engravings after Pieter Bruegel, a painting or two ascribed to Cornelis Anthonisz., and marine subjects in the background of world landscapes by Herri Met de Bles and others; in other words, very little. Vroom probably learnt more while in Italy, where he may have seen depictions of naval battles by Tintoretto, for example, and from the brothers Bril in Rome, but these influences do not explain the confidence and assuredness of even his early works, which do not look as if they are the first tentative exercises in a nascent genre.

Vroom came from a family of artists: his father was a sculptor and a maker of ceramics and both his uncle and grandfather were sculptors and stonemasons. Van Mander's account of Vroom's extensive travels throughout the Mediterranean both before and after his marriage, are almost certainly based at first-hand on Vroom's own storytelling, to judge by their somewhat vainglorious embellishing. In 1594, the year of his earliest surviving dated picture (in fact it does not survive, since it was destroyed in 1945, but photographs of it do), he was exempted from military service by the burgomasters of Haarlem ‘because of his unique skill in painting of marine subjects in which he excels all others’.1

According to Van Mander, writing in 1604, Cornelis Vroom was then already known for his beach scenes. This picture, dating from 1607, is the earliest such work to have come down to us, and the earliest of a genre that was to be widely practised in Haarlem and elsewhere in Holland from the 1620s until late in the century. It is in fact by some margin the earliest of Vroom's surviving beach scenes, since the others date from the 1620s and '30s, by which time other painters had started to depict similar scenes. His own later beach scenes, always showing fishing pinks coming ashore, and their catch being unloaded, have a progressively lower viewpoint and horizon line. This development can be seen in the picture of 1623, in which the horizon line runs across the picture plane just below the centre line (formerly with P. de Boer, Amsterdam), and another of 1635, in which sea and land extend less than one third of the height of the picture.2 The present work, by comparison, deploys the conventional Mannerist bird's eye perspective with a high horizon line, which, by comparison with his early dated marine paintings, confirms the date in the first years of the century.