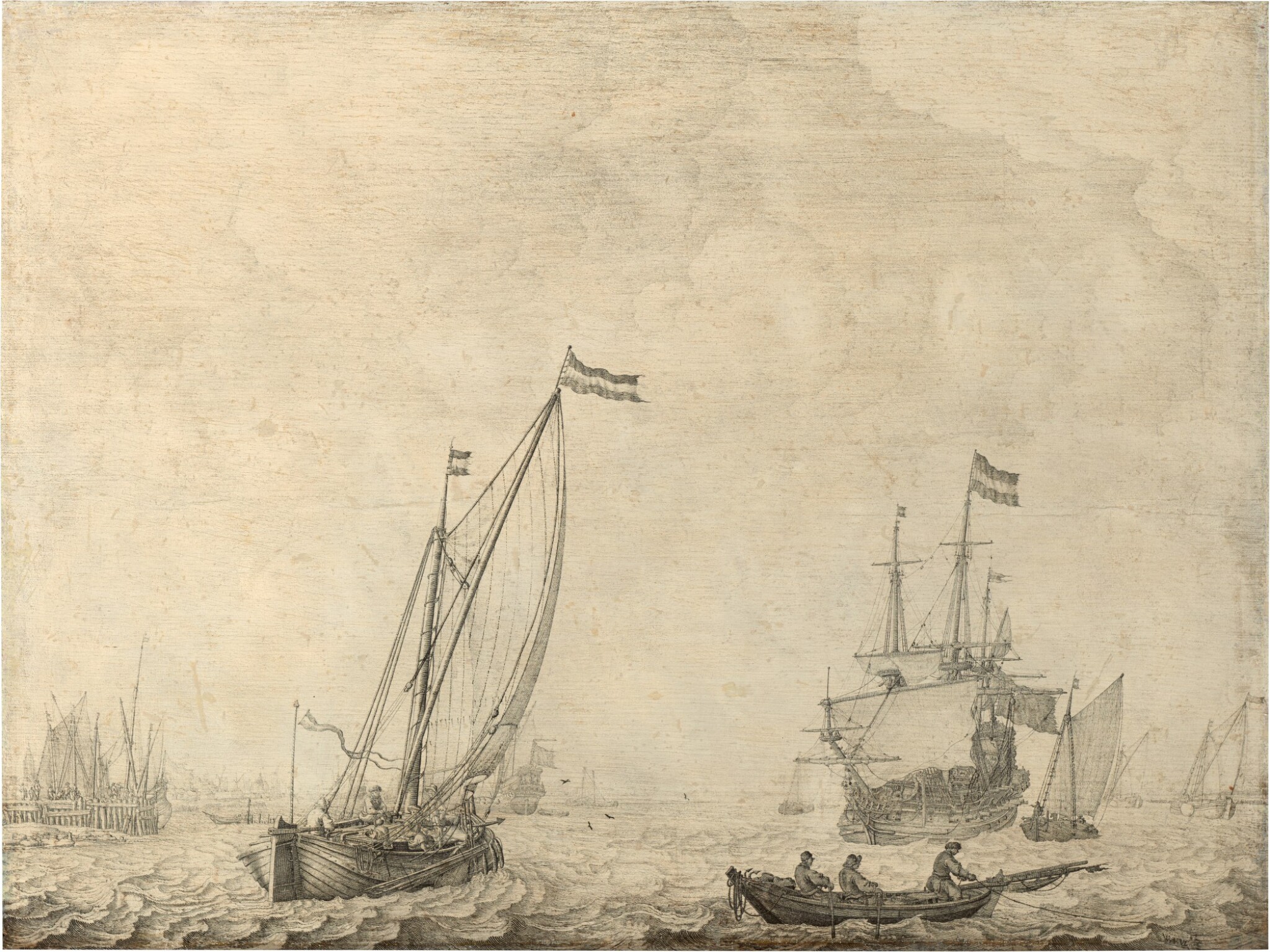 A coastal scene with a three-master, a kaag on a broad reach and other small vessels, a penschilderij

a penschilderij (pen painting): pen and ink on oak panel prepared with a gesso ground

A coastal scene with a three-master, a kaag on a broad reach and other small vessels, a penschilderij

a penschilderij (pen painting): pen and ink on oak panel prepared with a gesso ground

Pen-painting on panel, in a modern faux tortoiseshell frame in good condition.

The oak support is well preserved.

It is flat with a stable central horizontal join and evenly chamfered all round.

Minor horizontal hairline fractures are visible half way down the panel on the right hand side, running in to the ship on the right, beneath the flag.

The black ink medium is very well preserved and the tonal values are intact and fine cross-hatched details are in a good original condition.

Under u-v light an even scattering of pin prick losses can be detected across the surface, mostly concentrated in the sky region, with a small amount to the edges of the panel where frame rebate damage has occurred. These restorations are noticeably discoloured.

Very minor tonal loss can be seen through the clouds.

Fine details are very well preserved and the tonal values would be enhanced with the removal of a discoloured varnish.

Willem van de Velde the Elder’s penschilderijen are among the finest achievements of marine art of any era. Although he did not invent the technique, he unquestionably made it his own, and all subsequent penschilders were wholly dependent upon his example. Many of his commissioned penschilderijen are of sea battles crowded with ships, his most sought-after works however are informal groups of vessels inshore, packed with naturalistic incident, wholly convincing and immediately accessible. They are, perhaps even more than his son's paintings of the 1660s, windows onto the past.

This penschilderij is an excellent example of this studied informality. The kaag on a broad reach in the foreground, with the helmsman holding the heavy tiller under his arm to keep it steady, and his crewmen resting or working, is wholly captivating, as is the detail of the men in their fishermen’s furry hats laying a net from a rowing boat, its mast and sail stowed.

The technique of penschilderij – drawing with a quill pen and black ink on a ground prepared with lead-white over gesso – is inevitably painstaking and slow, though ideal for the recording of the details of ships and rigging in great and accurate detail. For this reason, Willem van de Velde the Elder did not produce many of them in the course of his long career. Like his son, he drew obsessively, his drawings, including naar het leven sketches of battles and maritime events and ship portraits, were used by both himself and his son. The vast majority of those that survive are in a small number of museums, many in The Netherlands and in London, and a few in Florence, because the Grand-Duke of Tuscany clearly loved them. Few are in private hands, and very few are in public collections outside Europe.

The technique of penschilder, a remarkable fusion of painting and drawing, is usually described in English as a pen-painting, although the original Dutch term penschilderij is often used, and is preferred here. The technique probably derives from the work of Hendrick Goltzius and his stepson Jacob Matham, but for the Mannerist artist, completely at home in the graphic arts, it was a bravura demonstration of technical virtuosity, a means of astounding his viewers with his extraordinary dexterity, while for Willem van de Velde the Elder, it was more a means to an end: the precise description of ships and small vessels, and often of events. Because their hybrid technique, half way between a painting and a drawing, is so idiosyncratic, Van de Velde’s penschilderijen are remarkable. Over the course of his long career he made relatively few traditional oil paintings in colour, preferring instead the pen-painting, and he viewed himself primarily as a draftsman, signing his letters ‘Scheepsteickenaer’ (literally ship’s draftsman). He spent much of his professional life aboard ships, recording on paper the events that passed before his eyes. His pen-paintings were in a sense translations of those shipboard drawings into more permanent works of remarkable clarity and directness, which were sought after and highly valued by his contemporaries, as they remain today.

This panel is one of a group of less than thirty smaller-scale penschilderijen, mainly dating from the 1640s. Most are set along the shoreline and depict small private vessels, as well as the fishermen, longshoremen and fish sellers that depend on their catch. They are smaller, more intimate scenes than the later, grander subjects that make up the majority of his pen-paintings. Other similar works from the mid-1640s include A Kaag Ashore Near a Pier with Ships and Other Vessels (1648?), Kaags Close to the Shore in a Busy Scene Near Den Helder with a Ship Passing (before 1644), both National Maritime Museum, Greenwich and A Weyschuit Lying by a Sea Wall with Other Fishing Boats (circa 1645) with Edward Speelman, London, 1949.1

Van de Velde's earliest penschilderijen were done on vellum, probably in the first half of the 1630s - the earliest dated example is from 1638. The technique is a combination of pen and ink over a thin layer of lead white, beneath which is a neutral gesso ground covering an oak panel (Van de Velde’s largest pen-paintings are on a canvas support, but he only started to make them on canvas in 1657). We know directly from the artist’s contemporary, Pieter Blaeu, that it was necessary to take special care with the preparations of the panel because of Van de Velde’s unusual technique. According to a letter from Blaeu to Cardinal Leopoldo de’ Medici, who was negotiating to buy a pen-painting (and bought several), it was necessary to allow the ground to dry for a longer than normal period, two to three months, ‘since otherwise the ground would not have hardened sufficiently to withstand the sharpness of the quill’.2 It would certainly have taken him a long time to complete each work, which explains why he made relatively few of them – and perhaps why his son Willem van de Velde the Younger turned his hand to conventional oil painting.

Examining the panel itself, we can see that the foreground is drawn in a deep black ink with a thick quill, so that these elements of the composition have great clarity and intensity. For the delicate lines of the sky and clouds as well as the background, Van de Velde used a finer quill and a paler ink. The result is that he effectively creates the sense of recession through atmospheric perspective, without losing any detail, even in the distant buildings of the town and the figures beyond.

While the fortified town with its harbour head on the left is clearly defined, with a tall church like that of the Zuiderkerk and some other buildings resembling those of Amsterdam, no one to date has been able to definitively identify the location of this composition. The topography and the types of vessels suggest a site on the Zuiderzee while the fortified town and harbour end on the left might point more toward the town of Amsterdam or possibly Enkhuizen. There is also a strip of land visible to the right.

We are grateful to Dr Remmelt Daalder for his kind assistance in cataloguing this lot.

2 D. Freedberg et al., ‘Paintings or Prints? Experiens Sillemans and the Origins of the Grisaille Sea-piece: Notes on a Rediscovered Technique’, in Print Quarterly, vol. I, 1984, pp. 151–53.