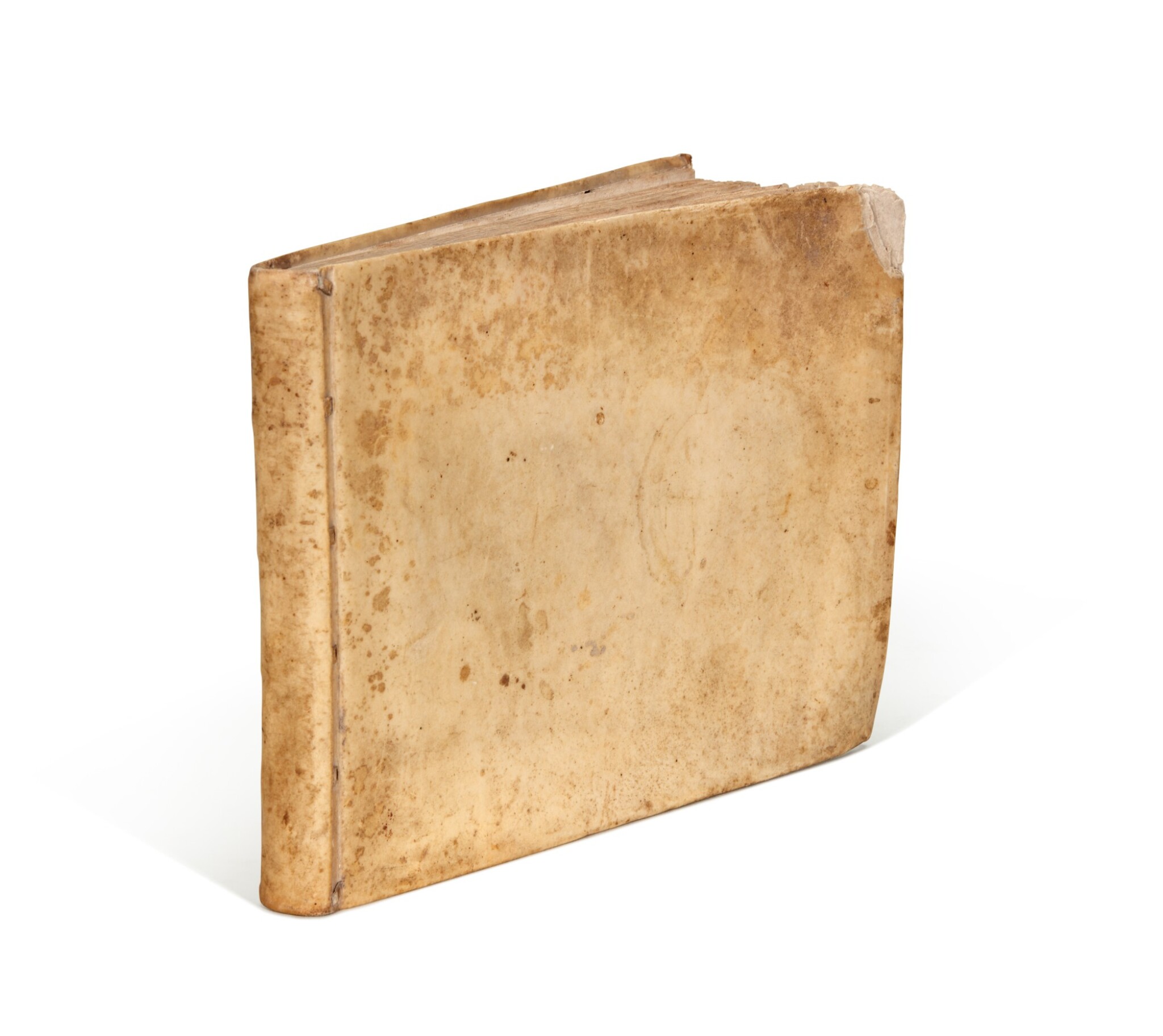 THIS UNSTUDIED AND UNPUBLISHED SOURCE INCLUDES 19 PIECES THAT CAN BE ATTRIBUTED TO FRANCESCO CORBETTA, THE MOST SIGNIFICANT AND PROLIFIC COMPOSER FOR THE 5-COURSE BAROQUE GUITAR OF THE SEVENTEENTH CENTURY.

IT IS THE MOST SIGNIFICANT MANUSCRIPT OF ITS KIND TO APPEAR AT AUCTION FOR OVER 20 YEARS.

Known as the 'Laignier' manuscript after the apparent ownership inscription on the stub of the excised last leaf, this remarkable source of seventeenth-century guitar music was copied in France in the latter part of the seventeenth century by an as yet unidentified single scribe in an evidently literate and fluent hand (attempts to identify the hand with that of one Julien Blouin can be discounted). An ultimate terminus ante quem is provided by the three airs from Louis Lacoste's opera Créuse l'Athénienne which were written later on the originally blank two front endpapers; the opera was first performed on 5 April 1712 at the Paris Académie Royale de Musique, and it possible that the Laignier manuscript's airs were copied around that time, or perhaps later. The hand that notated the airs is possibly one and the same with that of the apparent ownership inscription on the final stub - "Laignier chez M.r Hymette banquier rue grenier S.t Lazard vis a vis une fruitiere". Current studies have identified a certain Joseph Laignier as an employee of the banker Jacques-Joseph Hymette, resident at the rue Grenier St.-Lazare between the years 1713 and 1714.

The composer most represented is the Italian guitarist and composer Francesco Corbetta (c.1615-1681), regarded by his contemporaries as the greatest guitar virtuoso of his time - the Andrés Segovia of the seventeenth century as it were. After serving Archduke Leopold Wilhelm of Austria (c.1648) Corbetta made two prolonged visits in the 1660s and 1670s to London where he taught Charles II and members of the nobility. In all, five printed books of music by Corbetta survive, those published in 1639, 1643, 1648, 1671 and 1674. The present manuscript includes nine pieces from the printed editions - two from 1643, two from 1648 and five from 1671. However, Corbetta is known to have had printed at least three other books which have not survived. And indeed a large number of pieces are attributed to him in various manuscript sources which may be from these lost printed books. The 'Laignier' manuscript includes ten anonymous pieces attributed to him in other manuscript sources, and which were probably also to be found in one or other of the lost printed sources.

In the manuscript French tablature is combined with 'alfabeto' - a form of notation used in guitar sources whereby single upper-case letters are used to indicate five-part chords; it is not found in French printed sources, but occasionally in French manuscripts. Here the letter 'R' is employed occasionally instead of 'H2' for a B major chord, one indication that the pieces in question were copied from an earlier source. The use of 'C4' instead of 'M2' for an E major chord in a few places is also an earlier practice (see, for example, b.9 of the 'Contre partie' on fol.3r). Another noteworthy feature of the manuscript is the fact that a number of the pieces have additional parts for a second guitar (the so-called 'Contre Partie') not found in other sources (e.g. the first three pieces in the volume). The manuscript also includes arrangements of French lute music for the five-course guitar, a feature which, while not unique to this source, is rather unusual.

We are pleased to acknowledge the kind assistance of Monica Hall and Professor Tim Crawford in our cataloguing of this lot.