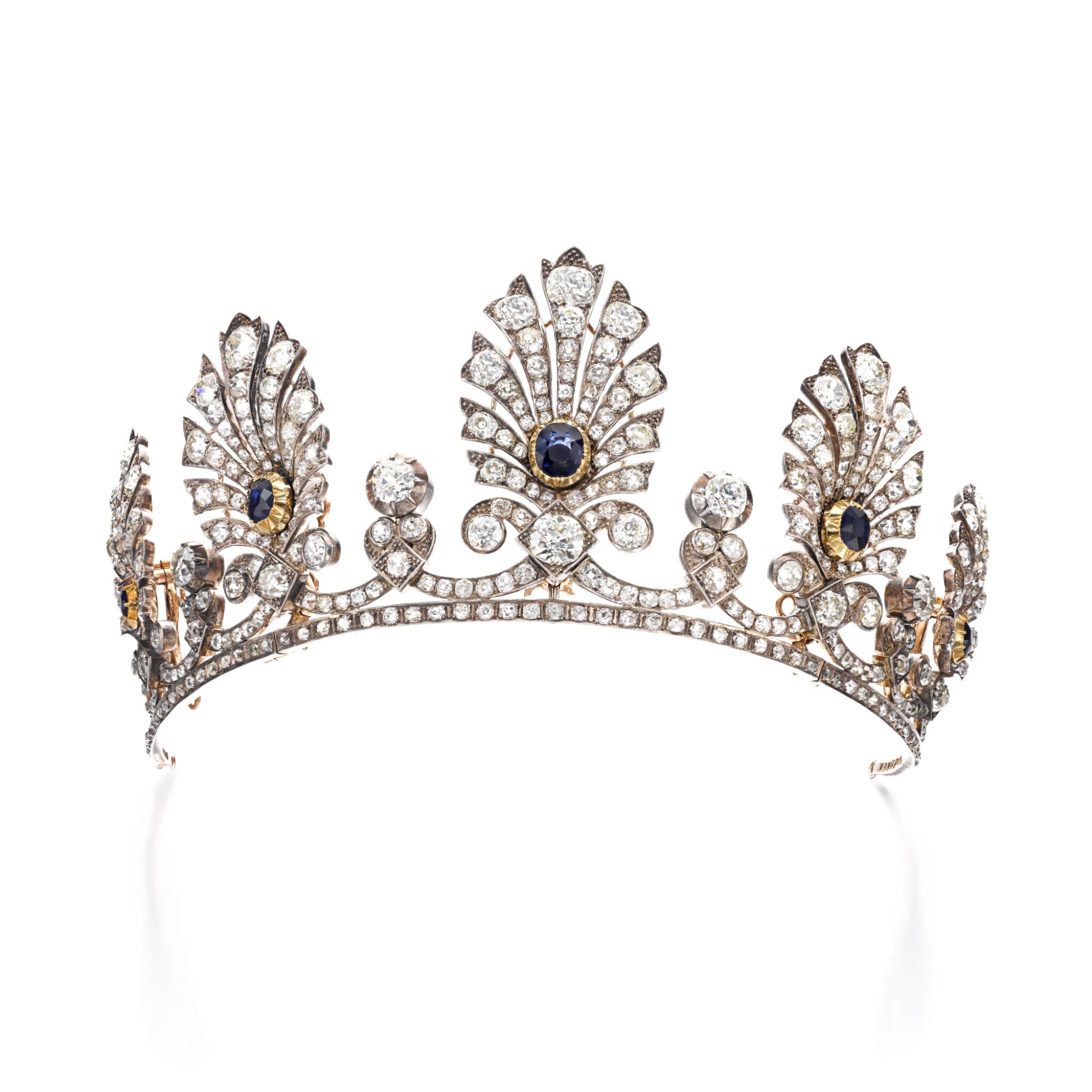 Please note that this tiara was formerly in the Collection of Johanna Loisinger.

Metal tested for silver and gold. Enameled numbers matching each palmette on the tiara. Sapphires blue of medium to strong saturation, with typical inclusions, some surface reaching, chips and nicks. Diamonds estimated to weigh a total of approximately 70.00 - 76.00 carats, diamonds of mixed colours, some of yellow tint, SI-I clarity, as gauged and graded in the mount. Scratches and small indents to the metal consistent with age, with some evidence of tarnish. In good condition for its period. Gross weight approximately 175 grams. Accompanied by a case stamped Koch.

"In response to your inquiry, we are pleased to provide you with a general report of the condition of the property described above. Please note that colour, clarity and weight of gemstones are statements of opinion only and not statements of fact by Sotheby's. We do not guarantee, and are not responsible for any certificate from a gemological laboratory that may accompany the property. We do not guarantee that watches are in working order. Prospective buyers should inspect each lot to satisfy themselves as to condition and must understand that any statement made by Sotheby's is merely a subjective, qualified opinion. Prospective buyers should also refer to refer to any Important Notices regarding this sale, which are printed in the Sale Catalogue, in particular to the Notice regarding the treatment and condition of gemstones. NOTWITHSTANDING THIS REPORT OR ANY DISCUSSIONS CONCERNING A LOT, ALL LOTS ARE OFFERED AND SOLD "AS IS" IN ACCORDANCE WITH THE CONDITIONS OF BUSINESS PRINTED IN THE SALE CATALOGUE."

Please note that this tiara was formerly in the Collection of Johanna Loisinger.

Prince Alexandre (1823-1895), son of grand-duke Luis II of Hesse-Darmstadt and princess Wilhelmine de Bade, renounced his titles and responsibilities to enter into a morganatic marriage with the Russian empress’ (née Marie de Hesse-Darmstadt) lady in waiting, Julie von Hauke (1825-1895) and it is from this union that the House of Battenberg originated. The couple resided at Heiligenberg castle, north of Lake Constance, and were friends with Queen Victoria. Alexandre and Julie had five children including Louis-Alexandre (1854-1921), grandfather of the recently deceased Duke of Edinburgh, Prince Consort to Queen Elizabeth II, Henri (1858-1896), father of the queen of Spain, Victoria-Eugénie d’Espagne, and Alexandre (1857-1893). The latter was unanimously elected prince of Bulgaria in 1879, a position from which he abdicated seven years later. Embittered by this fall from grace he retired to Graz pursuing a military career in the Austro-Hungarian army.

In love with a sister of the Kaiser, Alexandre was summarily rebuffed and then dismissed for political reasons and he later met Johanna Loisinger (1865-1951), a lyrical singer at the Darmstadt opera whom he married on 6th of February 1889 in Menton, France. It would seem the union surprised high society members such as Queen Victoria, who was disappointed by the bride and groom’s unequal rank but wished them happiness, nonetheless. It is unclear whether the prince inherited a tiara as a wedding gift or whether he inherited from his father in 1888. Regardless of when he acquired it, Johanna was photographed wearing the tiara as well as other diamond jewellery, commonly adorning her aristocratic contemporaries. In another image, she is wearing only the jewel’s base without the sapphire-set palmettes, which illustrates a characteristic of jewellery from this period in that it was conceived and executed to be worn a multitude of ways. Known officially as the Count and Countess of Hartenau, Alexandre and Johanna had two children, Asen Louis Alexandre (1890-1965) and Marie-Thérèse Vera Zvetana (1893-1935). Alexandre received a pension from the Bulgarian government (which his children would later continue to receive after his death) and sold some of his possessions for some two million leva enabling him to provide a comfortable lifestyle for his family. After Alexandre’s passing on 17th November 1893, Johanna relocated to Vienna where she ran several musical groups including what is now the Vienna Philharmonic.

Asen married Bertha Hussa-Lamos in 1932 but this union was without issue. Johanna eventually became a respected pianist collaborating with composers such as Anton Bruckner and Gustav Mahler until her death on the 20th of July 1951 at the age of 86 and was buried in Graz.

This tiara is being sold with a fitted case signed Robert Koch, although it was certainly made after the tiara itself. The well-known maison, founded in Frankfurt in 1879, was wildly popular and was eventually commissioned by the Russian tsar, the English royal court, the grand-dukes of Bade, of Hess, of Luxembourg and of Mecklembourg-Schwerin as well as the dukes of Anhalt, Saxe-Altenbourg as well as the princes of Schaumbourg-Lippe and German emperors.

·        Douglas LIVERSIDGE, The Mountbattens. From Battenberg to Windsor, London, 1978

Christophe Vachaudez is an author, curator and specialist in Royal European Jewels Collections.