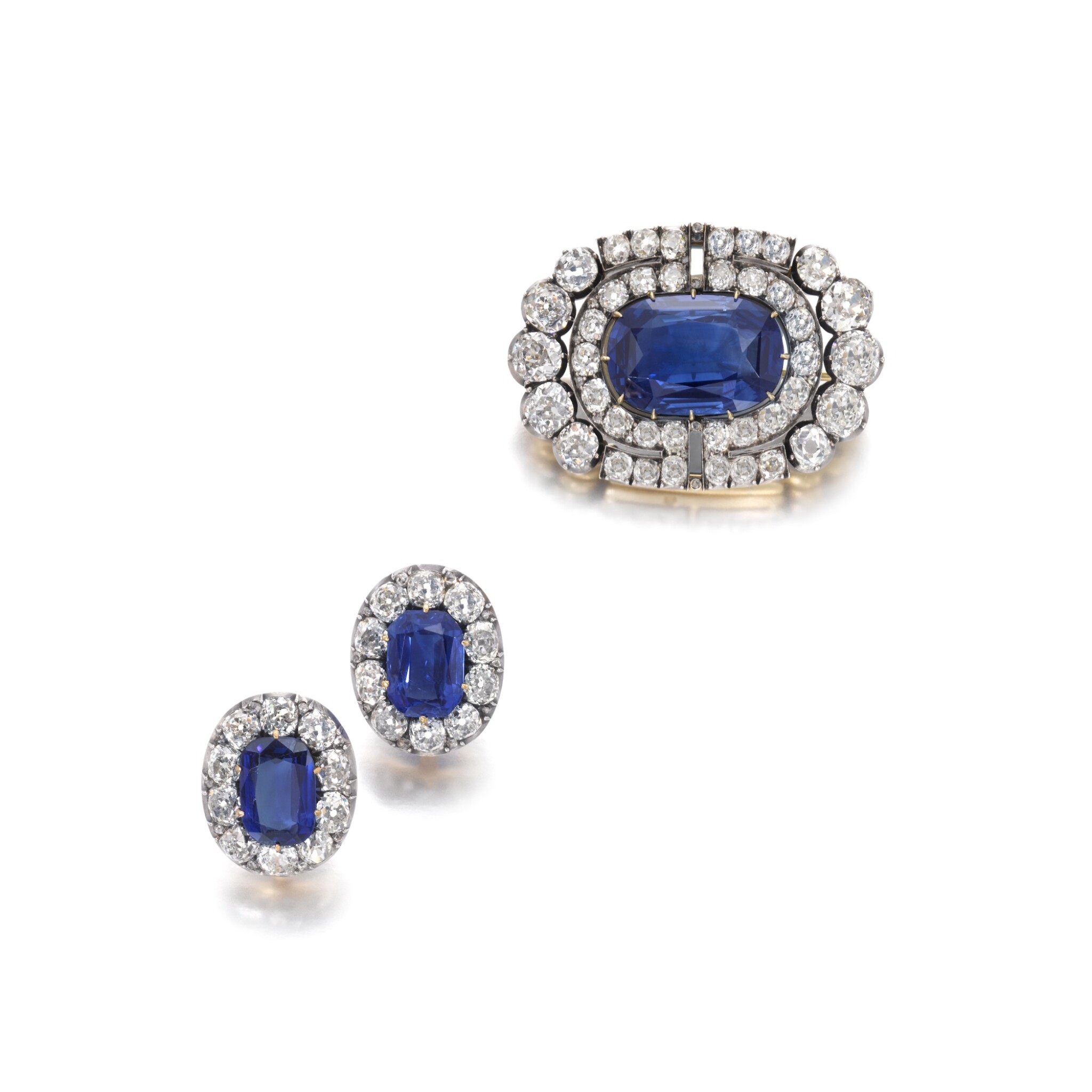 Comprising : a brooch of plaque design, set at the centre with an oval sapphire weighing 26.80 carats, the border set with cushion-shaped and rose diamonds, maker's marks for Sophia Schwan, probably for Bolin, St Petersburg, 1899-1908 and Russian assay marks, the pair of ear clips en suite, set with step-cut sapphires weighing 6.69 and 9.36 carats respectively, within a border of rose-cut and cushion-shaped diamonds, to a later fitted case by Cartier stamped with the crown of the Royal House of Greece, King of the Hellenes.

Accompanied by SSEF report no. 118097, stating that the sapphires are of Ceylon origin, with no indications of heating.

Metal tested as silver and gold. Brooch with Russian assay marks for 14 carat gold, and maker's marks for Sophia Schwan, probably for Bolin, St Petersburg, 1899-1908. Sapphires blue of medium strong to strong saturation, with typical inclusions, minor abrasions and scratches due to normal wear. For further details about the sapphires, please refer to the gemmological report. Diamonds estimated to weigh a total of approximately 22.00 - 25.00 carats, on average F- J colour, VS-I clarity, as gauged and graded in the mount. Signs of normal wear to the mount, scratches and light tarnish commensurate with age and use. In good condition. Total gross weight approximately 47 grams.

"In response to your inquiry, we are pleased to provide you with a general report of the condition of the property described above. Please note that colour, clarity and weight of gemstones are statements of opinion only and not statements of fact by Sotheby's. We do not guarantee, and are not responsible for any certificate from a gemological laboratory that may accompany the property. We do not guarantee that watches are in working order. Prospective buyers should inspect each lot to satisfy themselves as to condition and must understand that any statement made by Sotheby's is merely a subjective, qualified opinion. Prospective buyers should also refer to refer to any Important Notices regarding this sale, which are printed in the Sale Catalogue, in particular to the Notice regarding the treatment and condition of gemstones. NOTWITHSTANDING THIS REPORT OR ANY DISCUSSIONS CONCERNING A LOT, ALL LOTS ARE OFFERED AND SOLD "AS IS" IN ACCORDANCE WITH THE CONDITIONS OF BUSINESS PRINTED IN THE SALE CATALOGUE."

From the Collection of HIH Grand Duchess Maria Pavlovna

Two shabby Gladstone bags were chosen by Albert Stopford to secretly collect Maria Pavlovnas jewels from the closed but as yet un-pillaged Vladimir Palace in St Petersburg. The jewels were stored in a safe in her Moorish style suite of rooms. Access was obtained with the cooperation of Maria Pavlovnas eldest son Boris and trusted servant who let in Stopford, dressed in workman clothes, through a side door. He carefully dismantled the jewels, folding the pieces into old newspaper to protect them. In the safe was also money which Stopford changed into new Revolutionary notes and the on 30th July set out for a train journey of three nights to Kislovodsk in Caucasus where Maria Pavlovna had a house. In his diary he records his arrival: “KISLOVODSK. The grand Duchess received me in her cabinet de travail and we counted the money which I had bought her in my boots form Petrograd. It was in revolutionary thousand rouble notes, which she had never seen before.” This was the last visit he made to see her before setting out for London with her jewels though he did receive a letter form her telling him “ that the night before - September 13-14 - the the Committee of Workmen and Soldiers came to the house at 2.30 am and stayed until 6, opening, searching and turning everything topsy-turvy”. The pressure was ever increasing. This dramatic story is graphically retold in William Clarke’s recent book “Hidden Treasures of the Romanovs, saving the Royal jewels”.

Albert Henry Stopford, who was at the time, aged fifty five and so not eligible for war service, was very much part of the social scene in St Petersburg (then called Petrograd). He was a witness from the Revolution from July 1915 to October 1917 and published his diary and letters anonymously in 1919. From these it is clear that he was on very familiar terms with Grand Duchess Vladimir, seeing her almost every day when both in Petrograd. He was also in constant touch with the British Ambassador and the embassy staff passing back information and acting as a semi official courier on his journeys between Petrograd and London.

Grand Duchess Vladimir must have trusted him implicitly to put her extraordinary collection of jewels into his care. He had an advantage because on his journeys to and from England as the English Foreign Office and the War Office as well as the French and the Russian Embassies, used him to carry confidential papers which they feared might be in intercepted in the mail. Trustworthy travelers were a rarity so they took advantage of his travel for direct communication. It these circumstances he was effectively carrying their Diplomatic bags as he said “as a matter of courtesy and not in an official capacity”. He made full use of this privileged position and in those years he made four visits to England which he recalls in his diary. For instance on 22nd October 1916 he had “No bother with customs”. On another occasion the border officials wanted to examine his bags but he insisted he was carrying official papers and eventually they climbed down, no search was made and he was allowed to proceed on his journey.

During the war the safest way from Petrograd to England or France was by train first north through Finland, which at that time was in Russian hands, and so into Sweden and then on to either Bergen or Arendal in Norway. As German U-boats patrolled the North Sea and the coastal water were mined, the voyage from southern Sweden to Newcastle or Scotland was chosen as the shortest and safest journey for the steamer. The reality of these dangers is recalled in Stopford’s diary of 14th January 1916 “Not too bad a crossing. As we neared Arendal, in Norway we nearly ran into a mine. The sudden veering of the steamer threw us all off our seats. All along the south coast of Norway, where there are many currents, loose mines are constantly being washed up.” Later the same year on the way back from Petrograd he recalls in his diary for Thursday August 10th 1916 in rather telegraphic style, “before leaving the fjords for the open sea, was sent for by the captain. He expected the steamer to be stopped by German submarines, and said the F.O. bags ought to be weighted. The ships carpenter put iron into the coulisses of the bags and deposited them on the deck handy to be thrown overboard. Ship stopped suddenly in the night. Rushed on deck and found only a sea-frog. Arrived at Newcastle-on-Typne.”

Stopford left Petrograd on 26th September 1917 carrying Maria Pavlovna’s fabulous collection of jewels including the sensational sapphire brooch and earrings in this sale to embark on what must have been a very anxious ten day journey. Behind him the Provisional Government of Alexander Kerensky tottering and ahead lay the prospect of the hazardous journey across the North Sea which by this stage in the war was heavily mined. As it turned out he was able to follow his usual route via Finland and Sweden without encountering any difficulties, finally arriving safely by boat at Aberdeen on 6th October and professed himself “delighted to see policemen again”.

Meanwhile in the Caucasus the situation became so bad that Maria Pavlovna put her affairs in order and made arrangements for the cigarette boxes and cufflinks in the Vladimir Palace to be taken to Swedish Legation in Petrograd (these quite remarkably have only recently been discovered, safe and sound, in the Swedish Foreign Office in Stockholm and are now to be sold at Sotheby’s in London on 30th November 2009). She also made her own plans to leave Russia. The only route open to her was to make her way from Caucasus to the White Russian stronghold at the Black Sea port of Novorossiysk, a journey of 800 kilometers through a war-torn country. Despite the deteriorating situation and the fact that it was late autumn it is reported that she set off in style for the fifty mile journey to the nearest railway situation in an open carriage with her maid of honor at her side.

The next first hand report of Grand Duchess Vladimir’s escape from Russia is by her niece Grand Duchess Olga Alexandrovna who also left her departure to the last minute. She was already at the Black Sea port of Novorossiysk which at the time was the principle center of Denekin’s White Army and waiting for a passage when she heard at her Aunt Michen, the formidable Grand Duchess Vladimir, had arrived after a harrowing escape from Caucasus. She is quoted in her biography as recalling “I went to see her. I was duchess. There had never been much love between Aunt Michen and my own family, but I felt proud of her. Disregarding peril and hardship, the stubbornly had kept all the trimmings of bygone splendor and glory. And somehow carried it off. When even generals found themselves lucky to find a horse-cart and an old nag to bring them into safety, Aunt Michen made a long journey in her own train. It was battered all right – but it was hers. For the first time in my life I found it was a pleasure to kiss her”.

Even though the situation was very dangerous and time short it is said that the Grand Duchess, acting very much in character, is said to have refused passage on a ship which required a change ta Istanbul as she could have had to submit to the ignominy of being deloused. Instead, she obtained a later passage in February 1920 and within a month of her departure Novorossiysk fell to the Bolsheviks. Her passage was on an Italian vessel and it is recorded at once again “the good Stopford received us in Venice with money to pay for our passage”. From there she went to Switzerland and then to Paris.

On his return to England Albert Stopford put the jewels in a safety deposit box in a bank in London where they remained for rather more then two years by which time Maria Pavlovna had reached Europe. They then had discussions about who would provide the best professional advice. Cartier in Paris seemed to be the best choice as many of the jewels had come from them and they had offered to make no charge for the valuation. In mid-June 1920, Stopford received what was probably his last letter form “his Grand Duchess” where she said that “the offer is very tempting” but sadly in July her health had been severely affected by the ordeal of the previous four years and on 6th September she died. Her tomb is in the Russian Orthodox church Contrexeville in north eastern France which she had had build in memory of her husband in 1909.

The division of jewels therefore became the main matter for her will and the were placed in the hands of Cartier for valuation. Thereafter the division was by no means simple.