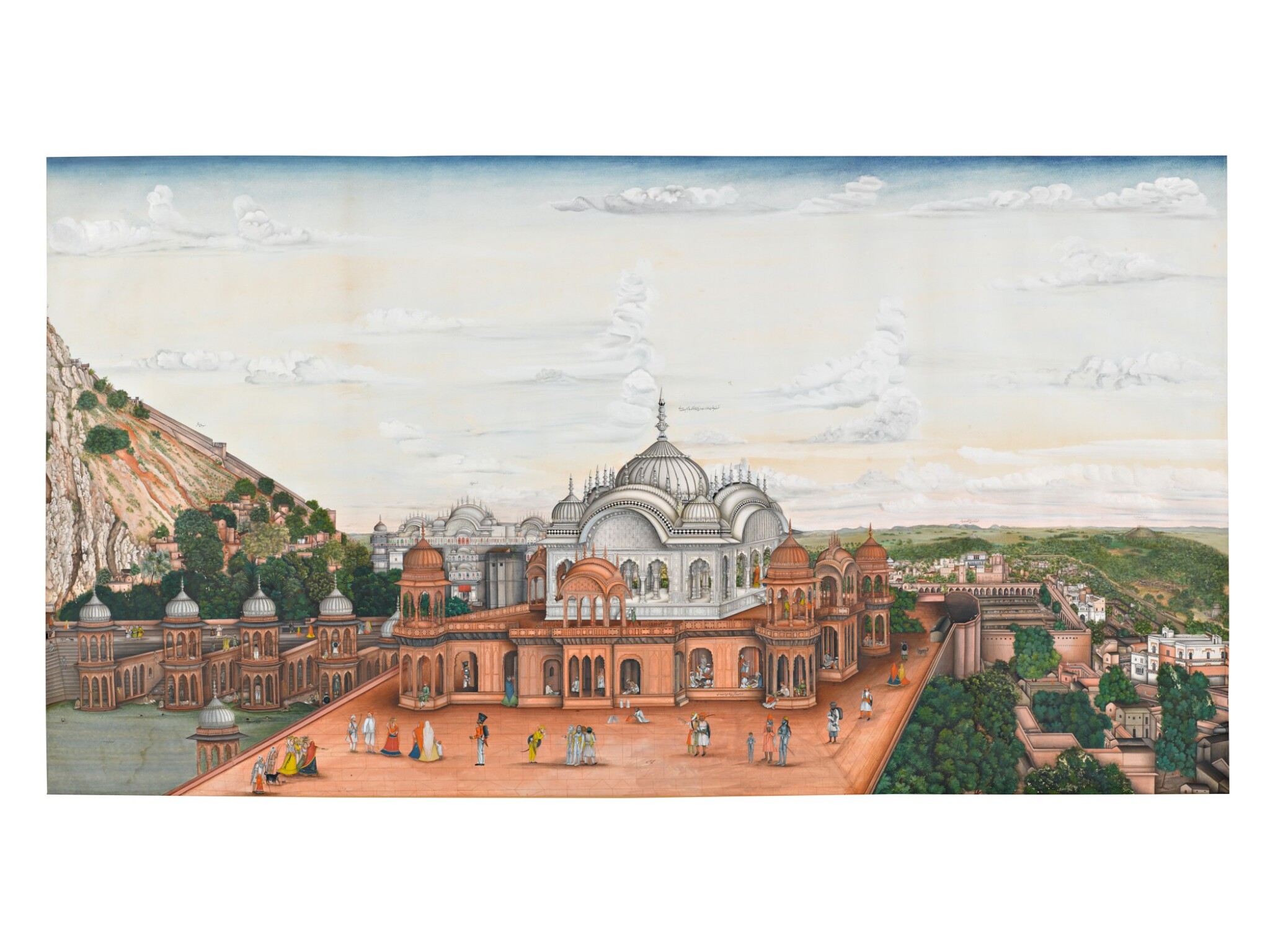 gouache on paper, inscribed in nasta'liq script in upper border ''The map of the city of Alwar, Chattri and Mahal together with a few other adjoining places'', the painting with further minute inscriptions in nasta'liq, framed

William Beckford, Fonthill Abbey, Wiltshire (1759-1844), backboard of original frame bears label 'Fonthill Heirlooms 105/15'
James Morrison, Fonthill House, Tisbury, Wiltshire (1789-1857)
Alfred Morrison, D.L., J.P. (1821-97)
Hugh Morrison, M.P., J.P., D.L. (1868-1931)
The Rt. Hon. Lord Margadale of Islay, T.D., J.P., D.L. (1906-96)
Christie's, London, 15 December 1971, lot 114
Sven Gahlin, London (1934-2017)
Sotheby’s, London, The Sven Gahlin Collection, 6 October 2015, lot 35
William Dalrymple and Yuthika Sharma, Princes and Painters in Mughal Delhi, 1707-1857, New York, 2012, p.48, fig.11
Princes and Painters in Mughal Delhi, 1707-1857, Asia Society Museum, New York, 7 February - 6 May 2012
This superlative view of Alwar depicts the vast panorama of the city dominated by the white marble and red sandstone cenotaph of Raja Bakhtawar Singh (r.1791-1815). It was built in 1815 by Raja Vinay Singh of Alwar, his nephew and heir, and is better known as Moosi Maharani ki Chhatri after Bakhtawar Singh’s mistress, Moosi, who committed sati here after he died. The surrounding countryside is dotted with villages and distant hilltop forts, and the whole scene is populated by tiny figures, some so small in the distant areas as to be almost invisible. It is an extraordinary artistic and topographical achievement, painted at a time when such views were only beginning to be practised by Indian artists, mostly under the patronage of the British.

The painting has been attributed to Ghulam 'Ali Khan, the most prolific and sought-after artist in Delhi in the first half of the nineteenth century. His earliest known work, dating to 1817, is a view of the Diwan-i Khas of the Red Fort in Delhi, now in the British Library (Add.Or.4694), which illustrates his sure command of topographical drawing even at the beginning of his career. The placement of tiny figures within the architectural setting of the Diwan-i Khas is comparable to the figures in our panoramic view. Topographical views were an increasingly popular subject in the first quarter of the nineteenth century in Delhi. Ghulam 'Ali was one of the few artists who excelled in topography as well as portraiture. His work influenced several artists working in Delhi at this time who are thought of as belonging to the 'Delhi School' of painting. These included artists such as Mazhar 'Ali Khan, Faiz 'Ali Khan, Babar 'Ali Khan and Mirza Shahrukh Beg, who were all part of Ghulam 'Ali Khan’s extended family circle (Sharma 2019, p.140).

Ghulam 'Ali Khan combined his work for British patrons such as William and James Fraser and the Anglo-Indian cavalry officer Colonel James Skinner alongside working for the Mughal court and for rulers of provincial courts around Delhi, such as Raja Vinay Singh of Alwar (r.1815-57) in Rajasthan and Nawab 'Abd al-Rahman (r.1845-57) of Jhajjar in Haryana. It is quite likely that the present painting was commissioned by Raja Vinay Singh soon after the cenotaph for Raja Bakhtawar Singh was completed. Ghulam 'Ali’s introduction to the Alwar court may have happened when William and James Fraser visited Alwar in the 1820s. This was following their visit to Nawab Ahmad Baksh Khan, who was a close friend of William Fraser and the agent for Raja Bakhtawar Singh at the court of the Mughal Emperor Akbar II in Delhi. Ghulam 'Ali Khan had moved to the Alwar court by 1840 when he was commissioned by Raja Vinay Singh to work on a copy of the classical Persian literary work, Gulistan of Sa’di. He worked at the Alwar atelier for at least twelve years, as the Gulistan manuscript was completed in 1852 (Losty and Roy 2012, p.231). For further discussion on Ghulam 'Ali Khan and the Delhi School of painting, see Sharma 2012, pp.41-51, and Sharma 2019, pp.140-7.

The closest comparison to our painting is a slightly later view of Delhi, an extraordinary work painted by Mazhar 'Ali Khan, possibly for Sir Thomas Metcalfe, in 1846 (British Library; Add.Or.4126). At almost five metres wide, it shows a 360° panorama of the city as seen from the top of the Lahore Gate of the Red Fort, with buildings of interest including the Red Fort, the Jama Masjid and the Metcalfe residence among others labelled in Persian in the lower border. (Dalrymple and Sharma 2019, pp.168-171, cat.75). Were it not for the provenance of the present work it might be considered to have been painted by Mazhar 'Ali Khan, or be closer in date to Ghulam 'Ali Khan’s move to the Alwar court. However, the backboard of the original frame of the present work bears an inscription "Fonthill Heirlooms 105/15" indicating that it once belonged to the famous collector William Beckford of Fonthill Abbey, Wiltshire. Beckford had sold Fonthill Abbey, most of its contents and his collection by 1823. Therefore, this work must have been painted and in England by that time. Beckford had a large number of Indian paintings in his collection. He acquired thirty-five albums from the Swiss-French engineer and scholar Colonel Antoine-Louis Polier, and another eight from Captain Archibald Swinton, who were both in the service of the East India Company, giving a total of forty-three bound albums among his other acquisitions of Indian paintings (Harris 2001, pp.360-6).