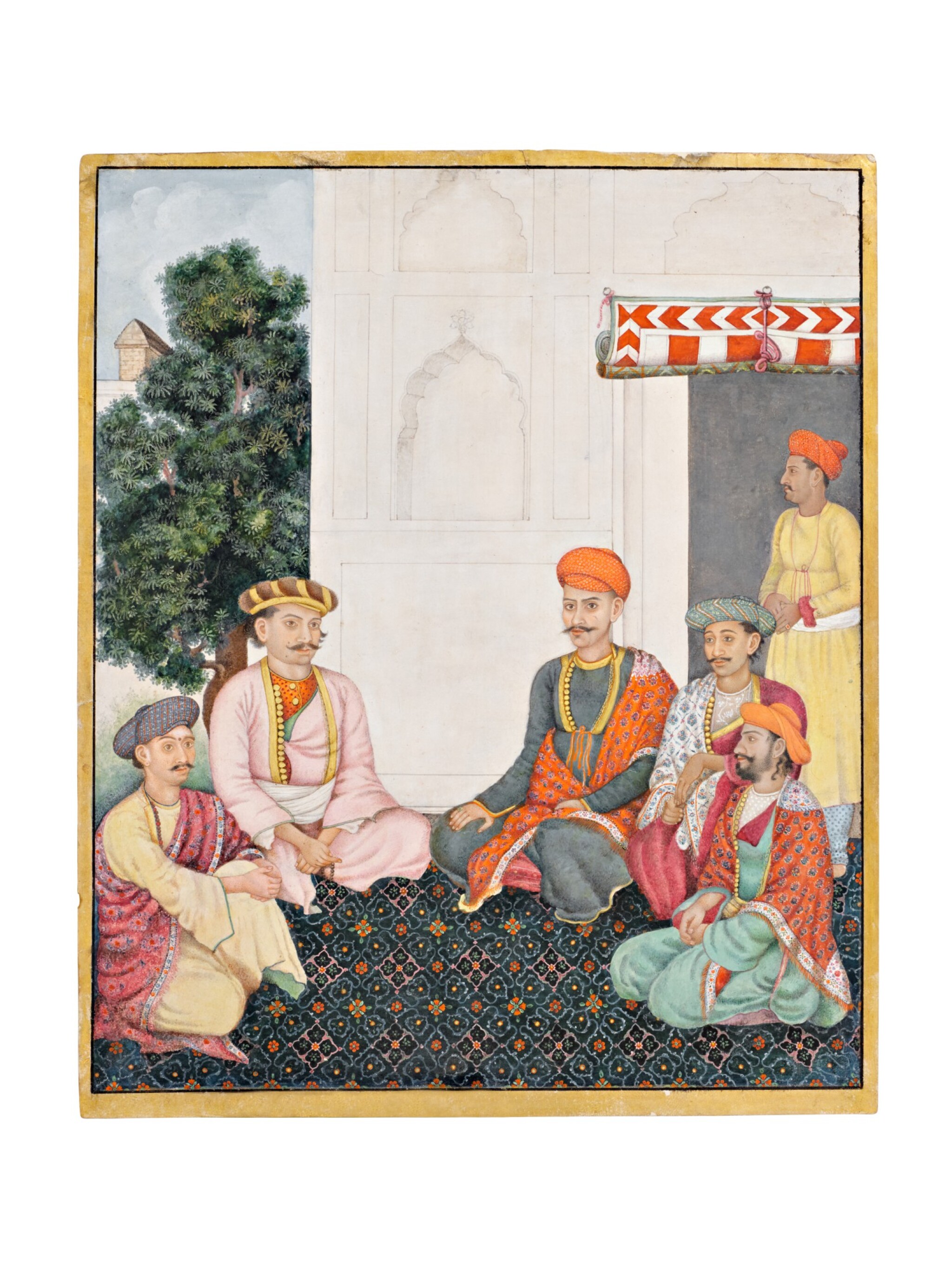 gouache heightened with gold on paper, with black rules and narrow gold border

Further Persian inscriptions on the flyleaf, in nasta’liq script, identify all the figures, from left to right:
Gopal, a Brahman, inhabitant of Mathura.
Subhani, a ruby-cutter, inhabitant of Farrukhabad.
Lalita Parshad, son of Ajudh Parshad, an Indian physician (hakim-i hindi).
Jogdan Khatri, inhabitant of Katra Nil ('the indigo market', a quarter of Old Delhi).
Muluk Singh Khatri, inhabitant of Delhi.
Keval, a servant (standing in the doorway).

This watercolour is from a well-known series of illustrations commissioned by the Scottish officer, William Fraser (1784-1835) and his brother, James Baillie Fraser (1783-1856). William Fraser arrived in Calcutta in February 1802 to join the service of the East India Company, and in 1805 he was appointed Assistant to Charles Seton, Resident of Delhi. As a result of this appointment, William spent much time in Delhi and its surrounding areas. His increasing knowledge of Indian languages and customs allowed him to interact easily with the locals. His brother, James, arrived in Calcutta in January 1814 and decided to visit William in Delhi a year later. Between the years 1815-19, under James’s encouragement, William engaged a group of local artists to produce drawings and watercolours depicting architectural views as well as residents of Delhi and its neighbouring areas. This visual record of Delhi and its surrounding villages in the first quarter of the nineteenth century, comprising portraits of individuals and groups of figures, is now referred to as the Fraser Album. The illustrations included portraits of local noblemen, merchants, villagers, musicians and dancers, recruits from Skinner’s Horse, Afghan horse merchants and fakirs. These studies are remarkable for the realism of the figures, their candid poses and how they engage with the viewer. They constitute one of the finest groups of Company School illustrations to be produced in India in the nineteenth century.

James Fraser realised the significance of these portraits with the diverse range of people living in Delhi and its environs in the early nineteenth century. He wrote to his father in Scotland from Skinner’s headquarters in Hansi on 30 October 1820: "The native Drawings of Costume will form unquestionably the finest collection that ever visited England from hence, & include the inhabitants of all the districts near Dihlee – say the Sikhs, the Mewattees & Goojurs, etc. & inhabitants of Hurreana with an endless variety of Moghuls, Pathans, Candaharis, & Cashmereanee, Ghookas etc. etc." (Archer and Falk 1989, p.43). Before the Fraser illustrations were commissioned, Company paintings in Delhi were mainly focused on views of landscapes and architectural monuments. The Fraser pictures provide a record of life in and around the old Mughal capital, depicting the local people and their dress, before the British established their presence more firmly in the area after the fall of Delhi in 1803.

The names of all the artists who worked on the Fraser illustrations are not known although several have been attributed to Ghulam 'Ali Khan from Delhi, to Lallji and his son Hulas Lal from Patna, and to the Fraser Master Artist whose identity is still unknown. Ghulam 'Ali Khan is often thought of as the main artist of the Fraser series. Archer and Falk attributed the group figure studies in an architectural and village setting to Ghulam 'Ali Khan and the single figures in the Album to his family workshop (Archer and Falk 1989, p.46). John Seyller agreed with this attribution and suggested that the present painting is the work of Ghulam 'Ali Khan. He compared this illustration with three Company School watercolours in the San Diego Museum of Art, formerly in the collection of Edwin Binney 3rd, which are also thought to be by Ghulam 'Ali. They include a group of seated nautch girls or dancers (acc.no.1990.395); Nawab Zulfiqar ud-din Haidar seated with companions (acc.no.1990.398); and a seated portrait of Lala Bhagwan Das, a perfume seller and banker from Shahjahanabad in Delhi, with an attendant (acc.no.1990.397) (illus. in Goswamy and Smith 2005, nos.117-9). These illustrations share similarities with the present painting in the arrangement of the brightly dressed seated and standing figures against the cool, grey walls with arched niches, and the rolled-up cloth-covered bamboo screens in the background. However, other scholars such as J.R. Losty and Malini Roy disagree with the suggestion of Ghulam 'Ali Khan being the primary artist for the Fraser Album illustrations. This is based on his "poor command of figural drawing" as observed in the tiny figures in the Divan-i Khas in the Delhi Palace in the British Library (Add.Or.4694) which is ascribed to him and dated 1817 (Losty and Roy 2012, p.218). This finely executed topographical view was painted by him early in his career and is contemporaneous to the Fraser Album. The earliest known portraits ascribed to Ghulam 'Ali Khan are two imperial portraits on ivory depicting the Mughal Emperor Akbar II and his son Mirza Salim, which date from circa 1827-28 and are painted in a very different style to the Fraser illustrations (ibid., p.220, figs.154-5).

The Fraser illustrations were sent back to Scotland in 1819 where James Fraser intended to publish them as aquatints on his return from India. However, the project was never completed. Over ninety coloured drawings were discovered among the papers of the Fraser family in 1979. Most of the illustrations were dispersed at two auctions at Sotheby's in 1980 (London, 7 July 1980, lots 1-45; New York, 9 December 1980, lots 130-187). Paintings from this important series are now in a number of public collections including the British Library and the British Museum, London; the Victoria and Albert Museum, London; the David Collection, Copenhagen; the Virginia Museum of Fine Arts, and the Art Institute of Chicago. A painting depicting a group of five seated Afghan horse merchants from the Fraser Album was sold in these rooms, 19 October 2016, lot 19, as part of the Khosrovani-Diba Collection. A further painting depicting Khan Bahadur Khan and members of his clan was sold on 25 October 2017, lot 98. For another illustration from the Fraser Album in the present sale depicting a trooper of Skinner’s Horse holding a spear, see lot 7.