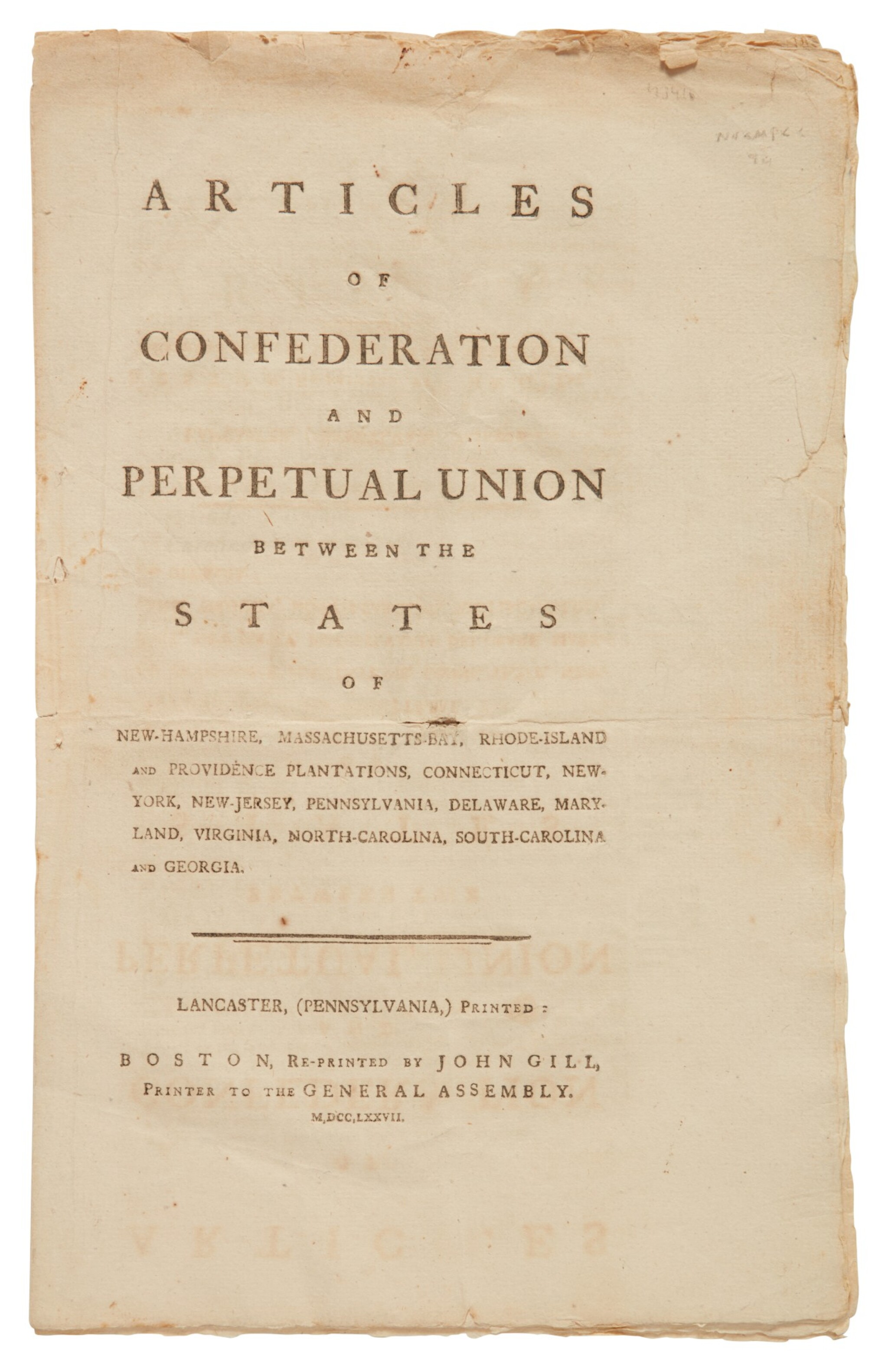 An early and rare edition of the Articles of Confederation, one of the great documents of American history and the vital stepping-stone to the United States Constitution.

"In 1776, to defend themselves against one of the world's most fearsome military powers, the thirteen colonies entered into a solemn alliance with one another. It did not take long for some Americans to propose that this 'continental' polity needed a constitution of its own" (CCC, p. 55), and the Continental Congress began to draft the present "firm league of friendship," in which each state retained "its sovereignty, freedom, and independence."

After more than a year of debate, Congress approved the text of the Articles of Confederation on 15 November 1777. The Congress immediately adopted a circular letter urging quick action on the articles: "This business has, in its progress, been attended with uncommon embarrassments and delay, which the most anxious solicitude and persevering diligence could not prevent. To form a permanent union, accommodated to the opinion and wishes of the delegates of so many states, differing in habits, produce, commerce, and internal police, was found to be a work which nothing but time and reflection, conspiring with a disposition to conciliate, could mature and accomplish. Hardly is it to be expected that any plan, in the variety of provisions essential to our union, should exactly correspond with the maxims and political views of every particular State. Let it be remarked, that, after most careful inquiry and the fullest information, this is proposed as the best which could be adopted to the circumstances of all; and as that alone which affords any tolerable prospect of a general ratification." This congressional resolve—together with another asking the states to contribute cash (not bills of credit) for the prosecution of the war and by a resolution by the Massachusetts House submitting the Articles for consideration—is appended by Gill to the text of the Articles.

The Articles, with their emphasis on individual states rights', proved a dismal failure, and final ratification was not achieved until March 1781. By the close of 1786, they were widely discredited, with many national leaders eager to refashion the charter into a stronger central government. The Convention called in Philadelphia in the summer of 1787 to revise the Articles of Confederation ended by replacing it with the Constitution. First printed in Lancaster, Pennsylvania, while Congress met there during the British occupation of Philadelphia, this is the official Massachusetts printing and the fifth edition overall listed by Evans.