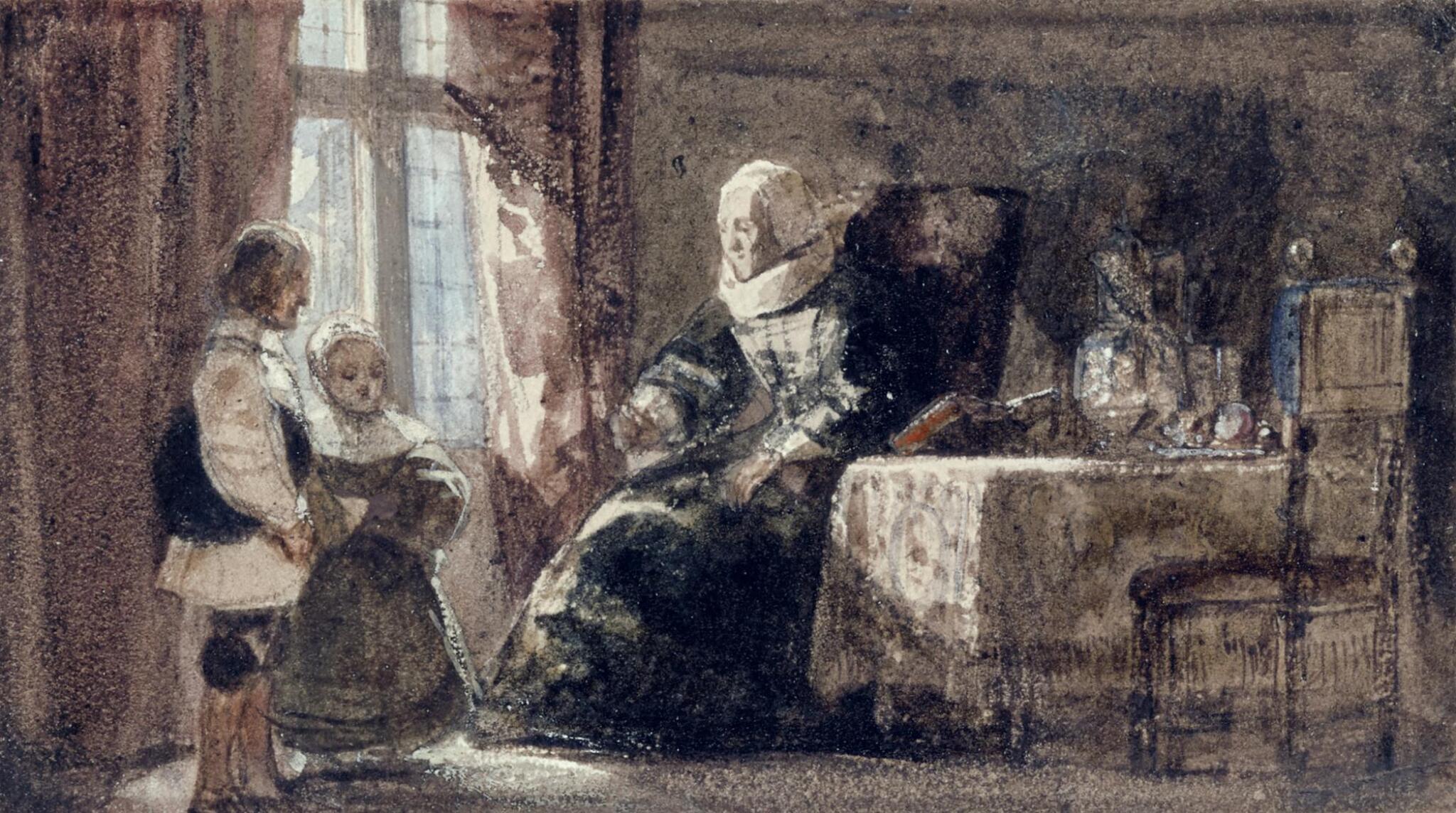 watercolor over pencil, heightened with gouache and gum arabic

Laid down to a sheet of paper which has been wrapped to an old card backing. There is some slight drop back in the strength of the watercolor and some minor losses of white heightening in particular to the two children on the left of the composition. There is what appears to be an old diagonal crease to the lower right corner and a small repair tear to the center right half of the upper edge. The works remains in otherwise good condition with the overall image strong and legible. Sold in a modern beaded giltwood frame.
In response to your inquiry, we are pleased to provide you with a general report of the condition of the property described above. Since we are not professional conservators or restorers, we urge you to consult with a restorer or conservator of your choice who will be better able to provide a detailed, professional report. Prospective buyers should inspect each lot to satisfy themselves as to condition and must understand that any statement made by Sotheby's is merely a subjective qualified opinion.
NOTWITHSTANDING THIS REPORT OR ANY DISCUSSIONS CONCERNING CONDITION OF A LOT, ALL LOTS ARE OFFERED AND SOLD "AS IS" IN ACCORDANCE WITH THE CONDITIONS OF SALE PRINTED IN THE CATALOGUE.
Probably Paul Périer (1809-1849);
By whom sold, Paris, 19 December 1846, lot 47 (as La Remonstrance);
With Paterson Gallery, London, 1913;
W.C. Alexander (1840-1916), and by descent;
By whom sold, New York, Sotheby's, 25 January 2017, lot 111;
There acquired by Richard L. Feigen.
A. Dubuisson and C.E. Hughes, Richard Parkes Bonington: His Life and Work, London 1924, p. 165 (with incorrect provenance);
P. Noon, "Bonington (1802-1828): Un romantique Anglais au Louvre," in La revue du Louvre et des musées de France 43, no. 4 (October 1994), p. 62;
P. Noon, Richard Parkes Bonington, The Complete Paintings, New Haven and London 2008, p. 394, cat. no. 361, reproduced in color.
London, Paterson Gallery, Loan Exhibition of Pictures and Drawings, 1913, unnumbered;
New Haven, Yale Center for British Art; Paris, Petit Palais, Richard Parkes Bonington, On the Pleasure of Painting, 13 November 1991 - 17 May 1992, no. 107.

This jewel-like watercolor, which has been dated to circa 1826, is a particularly radiant example of Bonington’s figure painting – a genre that greatly interested him during the last years of his short life. Inspired by Dutch 17th century painting, Bonington has created an atmospheric interior of deep shadows, half-lights and, in places, intense luminosity.

The work is a preparatory sketch for a now lost watercolor which was engraved, under the title The Grandmother, in 1833. The identity of the three figures is unknown, however they each re-appear in other works by Bonington. The children can be found in the lithograph Les Plaisirs Paternels,1 while the old lady is included in his watercolor The Use of Tears.2