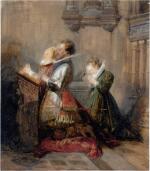 watercolor and gouache over traces of black chalk, heightened with gum arabic;

Hinge-mounted by the sheet's four corners to a modern card backing. There is some craquelure to passages of the gouache to the left edge and some minor nicks to the upper left corner and center of the sheet. The combination of watercolor and gouache remain in predominantly good condition throughout with the overall image strong and the colors vibrant. Sold in a modern Empire style frame.
In response to your inquiry, we are pleased to provide you with a general report of the condition of the property described above. Since we are not professional conservators or restorers, we urge you to consult with a restorer or conservator of your choice who will be better able to provide a detailed, professional report. Prospective buyers should inspect each lot to satisfy themselves as to condition and must understand that any statement made by Sotheby's is merely a subjective qualified opinion.
NOTWITHSTANDING THIS REPORT OR ANY DISCUSSIONS CONCERNING CONDITION OF A LOT, ALL LOTS ARE OFFERED AND SOLD "AS IS" IN ACCORDANCE WITH THE CONDITIONS OF SALE PRINTED IN THE CATALOGUE.
Duchesse d'Uzes, France;
Private collection, France;
With Galerie de Bayser, Paris, 2010;
Anonymous sale, Paris, Piasa, 17 December 2010, lot 101;
There acquired by Richard L. Feigen.
P. Noon, Richard Parkes Bonington: The Complete Drawings, New Haven 2011, p. 215, no. 360a, reproduced.

Prior to its reemergence in 2010 (see Provenance) the composition of this previously unrecorded watercolor was only known, with slight variations, as a lithograph in the suite Cahier de Six Sujets of late 1826, entitled La Prière.1 Noon has pointed out that the figures derive from studies of the funerary monuments of Lord Norris and Lord Shrewsbury in Westminster Abbey, which Bonington sketched in 1825. He has also noted that the physiognomies of the cavalier and his spouse in the lithograph closely resemble those of King Henri IV and Marie de' Medici,2 an observation which applies to the present work as well. Noon has suggested that the blue ribbon worn by the kneeling chevalier probably alludes to the Ordre du Saint-Esprit, a French order of chivalry founded by Henri III, which further supports Noon's previous suggestion that La Prière represents an episode in the life of Henri IV and his queen, Marie de' Medici.

The aforementioned lithograph differs from the watercolor in a number of respects, such as the less elaborate architectural setting and the addition of the dog in the left foreground.