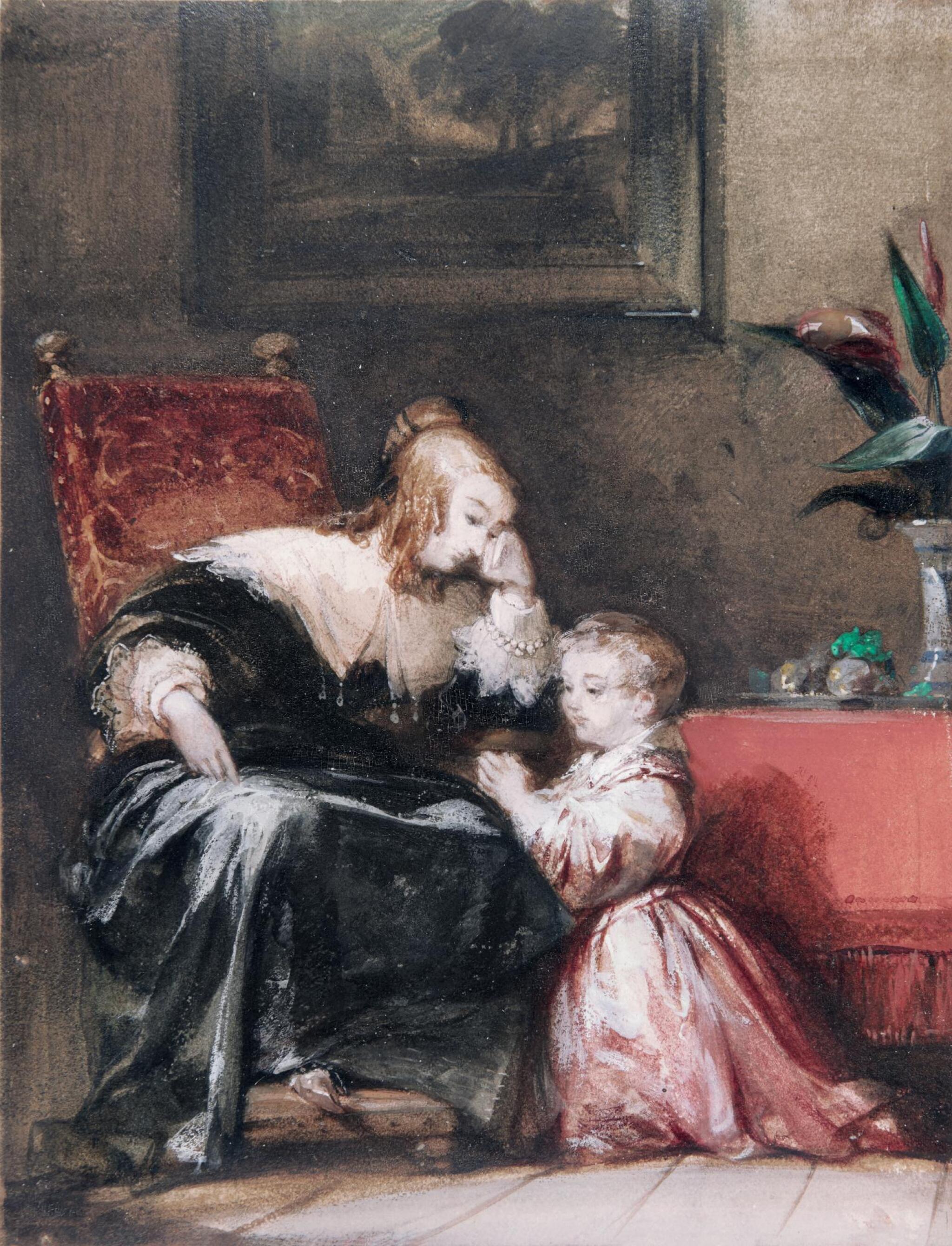 watercolor and gouache over traces of black chalk, heightened with gum arabic;

The sheet is window mounted to a blue paper backing which has in turn been window mounted to an old decorative mount. A small proportion of the sheet's edges are covered by the existing mount but the work could easily be detached from this in the future. There is some minor craquelure to passages of the gum arabic, such as above the chair and on the lap of the seated woman. There are also some very minor abrasions to the extremities though these do not detract from the overall aesthetic. The combination of watercolor and gouache remains predominantly well-preserved throughout with the image strong and the colors vibrant. Sold in decorative giltwood frame.
In response to your inquiry, we are pleased to provide you with a general report of the condition of the property described above. Since we are not professional conservators or restorers, we urge you to consult with a restorer or conservator of your choice who will be better able to provide a detailed, professional report. Prospective buyers should inspect each lot to satisfy themselves as to condition and must understand that any statement made by Sotheby's is merely a subjective qualified opinion.
NOTWITHSTANDING THIS REPORT OR ANY DISCUSSIONS CONCERNING CONDITION OF A LOT, ALL LOTS ARE OFFERED AND SOLD "AS IS" IN ACCORDANCE WITH THE CONDITIONS OF SALE PRINTED IN THE CATALOGUE.
Lewis Brown (d. 1836);
By whose executors sold, Paris, Place de la Bourse, 7 March 1843, lot 22;
Mademoiselle De H.;
Anonymous sale, Rouillac, Chateau de Cheverny, 4 June 2000, lot 14;
There acquired by Richard L. Feigen.
S. Duffy, Richard Parkes Bonington, London 2003, p. 17, reproduced fig. 8;
P. Noon, Richard Parkes Bonington. The Complete Paintings, New Haven and London 2008, p. 398, cat. no. 365, reproduced in color.

This finely preserved and sensitively rendered watercolor is closely related to Bonington’s painting of the same subject, titled A Child at Prayer, in the Wallace Collection, London.1 An energetic sheet of pen and ink preparatory studies housed in the collection of the National Gallery of Scotland, Edinburgh,2 closely relates to both the Feigen and Wallace pictures, with Noon suggesting a dating of circa 1826. Ingamells was the first to propose that the figures depict Anne of Austria and the young Louis XIV, in which case, as Noon also points out, the oil forms a pendant to Bonington's Anne of Austria and Mazarin of 1826 in the Musée du Louvre, Paris.3 Noon, who is inclined to accept Ingamell's identification of the figures, has also noted that the present watercolor is less religious than the oil version in its allusions, the artist having replaced a crucifix with a landscape painting above the queen's head.

The composition of the present work is also known through an inferior watercolor copy, by an anonymous artist, preserved in the Musée du Louvre, Paris.4