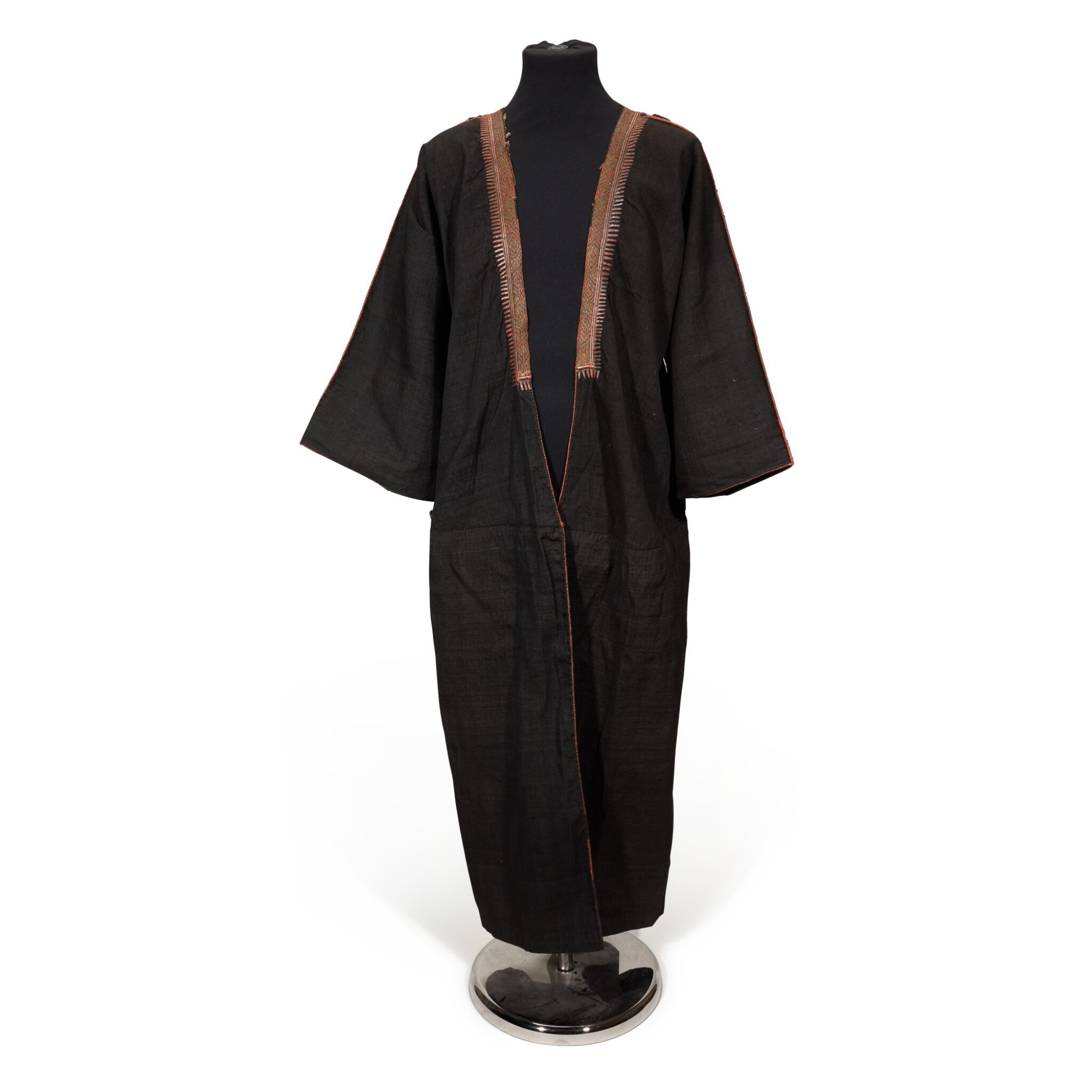 135cm from neck to hem, embroidered to the neck openings and sleeve seams in couched gold, green and purple silks, of simple T-shaped construction with joined panel forming the lower skirt, with wrap-over button and loop fastening

[also with:] signed affidavit by Veronica Latham, confirming that these items had been given by Vyvyan Richards to his friend Clifford Jones, and that they were given in turn by Jones's wife to Mrs Latham's late husband in the 1950s, signed and dated 6 March 1996

"...If you wear Arab things, wear the best. Clothes are significant among the tribes, and you must wear the appropriate, and appear at ease in them. Dress like a Sherif, if they agree to it..." (T.E. Lawrence, from 'Twenty-seven Articles', 1917)

Lawrence famously wore Arab dress during the Arab Revolt, although he had first discovered how well suited the costume was to desert life when excavating at Carchemish in Syria in the years before World War I. His adoption of Arab dress was practical but also crucial to his mission, which required that he have the trust of the Arab people. In a letter to Vyvyan Richards, who once owned this robe, he described his life during the Arab Revolt as being on "a kind of foreign stage, on which one plays day and night, in fancy dress, in a strange language with the price of failure on one's head if the part is not well filled." (15 July 1918, quoted in Brown, Lawrence: the Selected Letters, p.149) Towards the end of the war he tended to wear more elaborate costume and several photographs from 1917-18 depict Lawrence in an embroidered black outer robe similar to this one. By the time he returned to Europe after the war, Lawrence had assembled a substantial collection of contemporary Arab dress and he made a number of gifts to friends and family. Items of Arab dress from Lawrence' collection are now found at institutions including the Ashmolean museum, Oxford, All Souls College, Oxford, the Museum of Costume, Bath, and the National Army Museum (see Jeremy Wilson, Lawrence of Arabia, (National Portrait Gallery Publications, 1988), nos 105, 106, 108, 112, 113, and 114).

This outer rob, or zebun, would have been worn over a full-length thawb. It belonged to Vyvyan Richards (1886-1968). Richards had fallen in love with Lawrence when they were both undergraduates at Oxford but his feelings were never reciprocated and the relationship developed instead into a lifelong friendship. The two men had a longstanding plan to start a private press together, Richards kept Lawrence's books and some other belongings at his home in Epping Forest in the years after the war. Richards was one of the first readers of Seven Pillars of Wisdom in 1923. His admiring biography of his friend, A Portrait of T.E. Lawrence, was published in 1937.