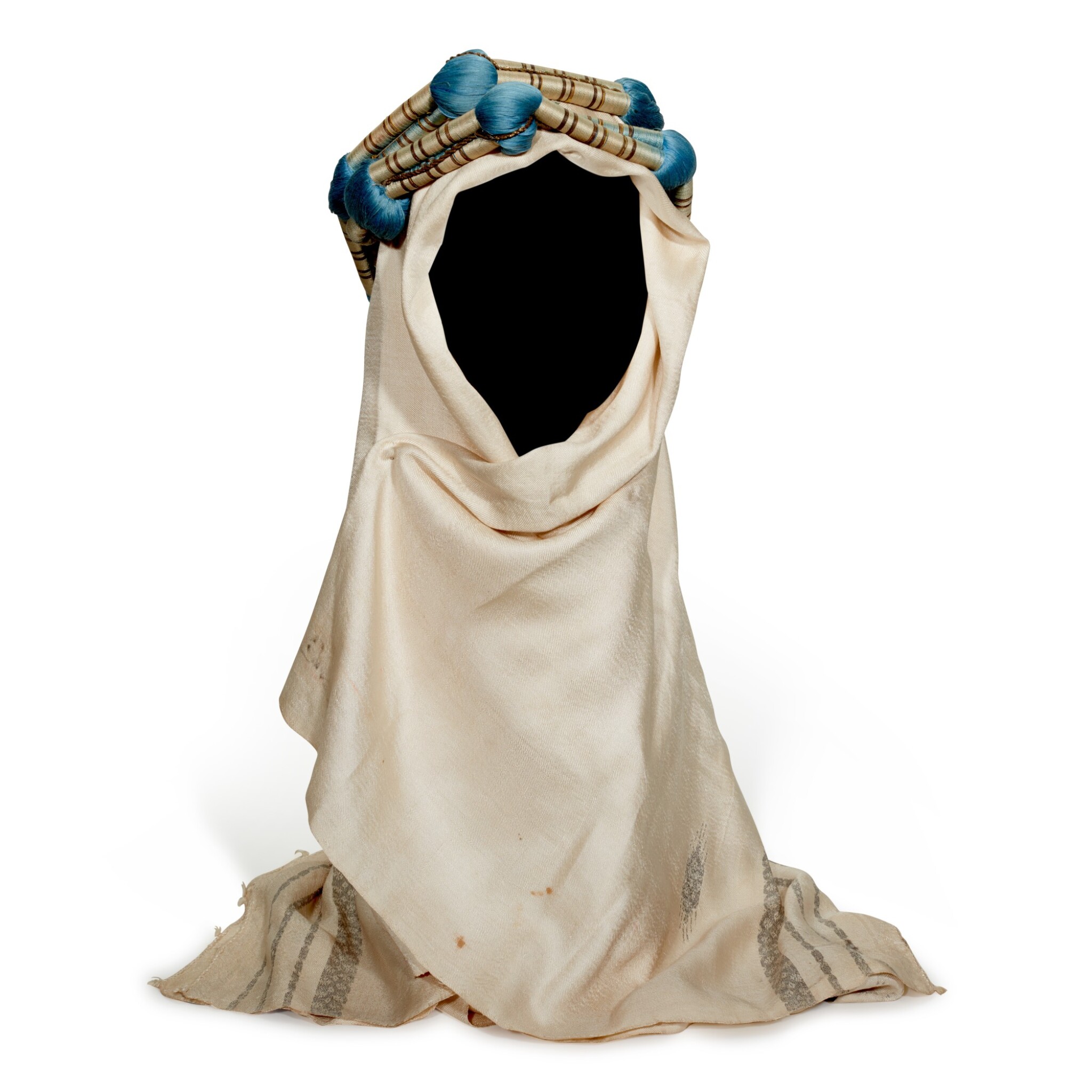 118 x 112.5cm, woven to the borders on either side with grey lozenges; with two Ageyls or head-bands, one formed from lengths of blue silk tightly adorned with gold thread and wire bands, the other formed from two joined loops covered with black diapered silk

[with:] Two photographs showing Private Harry Hosker in Egypt, each 14x9cm, captions on the reverse, 1916-17, and his military driving licence, signed, February 1916

"...If you wear Arab things, wear the best. Clothes are significant among the tribes, and you must wear the appropriate, and appear at ease in them. Dress like a Sherif, if they agree to it..." (T.E. Lawrence, from 'Twenty-seven Articles', 1917)

Lawrence famously wore Arab dress during the Arab Revolt, although he had first discovered how well suited the costume was to desert life when excavating at Carchemish in Syria in the years before World War I. His adoption of Arab dress was practical but also crucial to his mission, which required that he have the trust of the Arab people. Towards the end of the war he tended to wear more elaborate costume. By the time he returned to Europe after the war, Lawrence had assembled a substantial collection of contemporary Arab dress and he made a number of gifts to friends and family. Items of Arab dress from Lawrence's collection are now found at institutions including the Ashmolean museum, Oxford, All Souls College, Oxford, the Museum of Costume, Bath, and the National Army Museum (see Jeremy Wilson, Lawrence of Arabia, (National Portrait Gallery Publications, 1988), nos 105, 106, 108, 112, 113, and 114).

These mementoes of Lawrence were brought back from the Middle East by Private Harry Hosker, Lawrence's driver and batman. Hosker had served in the Middle East from March 1916 in the Royal Army Service Corps. He worked for Lawrence from February 1918 until he left theatre later in the year, and is included in Lawrence's roll of names in the Hejaz Armoured Car Company (Seven Pillars of Wisdom, Appendix I). Lawrence trusted Hosker to drive his car with a trunk full of gold sovereigns that he used to buy off Bedouin, but not all his duties were carried out to Lawrence's satisfaction; Hosker later told his family about Lawrence's complaints at his culinary skills, especially his inability to cook porridge.