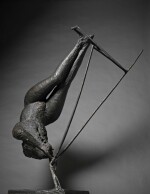 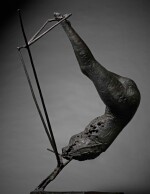 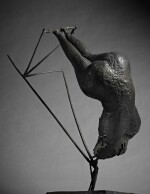 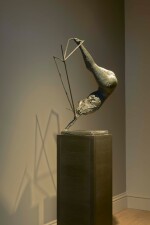 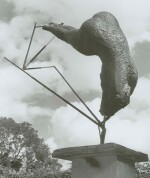 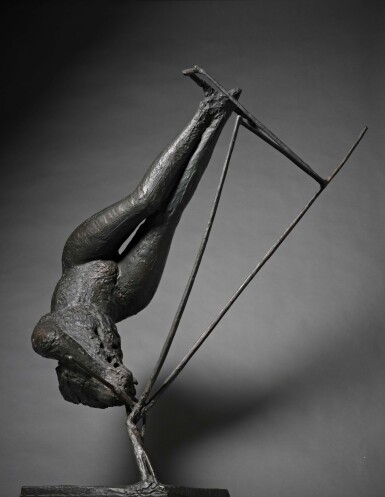 signed with monogram, numbered 5/8 and stamped with foundry stamp (on the Artist's bronze base)

Conceived and cast in 1957, the present work is number 5 from the edition of 8.

Overall the condition of the bronze is very good with minor dirt and wear to the surface consistent with age. The bronze has a dark patination with warm brown hues in areas including at the figure's proper left arm. The top section of the rod furthest from the figure is unpatinated. There are original mould marks to the figure's body, which is consistent with the casting process. There are some minor abrasions to the edges of the base and one or two minor dirt marks. There is some light surface dirt to creviced areas and a few instances of very minor rounding. There is some movement in the figure which is original to the structural composition of the group. This excepting, the work appears in very good overall condition.

The work has an integral Artist's bronze base.

The 1950s were an incredibly successful period for Butler. The decade began with the Tate’s purchase of Woman from his Hanover Gallery show. In 1952, his work was included in the British Pavilion at the Venice Biennale, and the decade ended with a 1959 show at the Pierre Matisse Gallery described as ‘one of the most astonishing exhibitions in its illustrious history’. (Jonathan Clarke Fine Art, Reg Butler: The Painted Bronzes, 2014, n.p)

One of the works on display at this seminal show was Figure in Space, a sculpture which encapsulates themes and concerns central to Butler’s oeuvre. This work builds on the themes of sadism and eroticism that began to emerge in his earlier St Catherine group, as Butler moved away from the influence of the Modernism of Henry Moore and Barbara Hepworth. He instead created his own visual language that reflected the trauma of the post-war years, projecting this distress and anguish onto female forms, and combining them with fetishistic and erotic elements, evoking the work of artists such as Hans Bellmer.

He wrote in a later essay that ‘the two most powerful emotional elements in us are related to sex and violence, or to put it another way, life and death’ (Gimpel Fils, 1986, n.p.) – tensions that are encapsulated in Figure in Space. Butler suspends a mutilated female form from one of the grid-like structures that dominate his work from the period. The sharp angles of these linear forms create a sense of the brutality and distraction he describes, which are masterfully contrasted with the vulnerability and sensuality that the soft curves of female torso evoke. Butler believed that ‘The human image has to be about LOVE and SORROW’ (Gimpel Fils, 1986, n.p.), and we see this struggle through Figure in Space, as Butler tests the limits of the human body, seeing how far he can distort it whilst retaining its humanity.