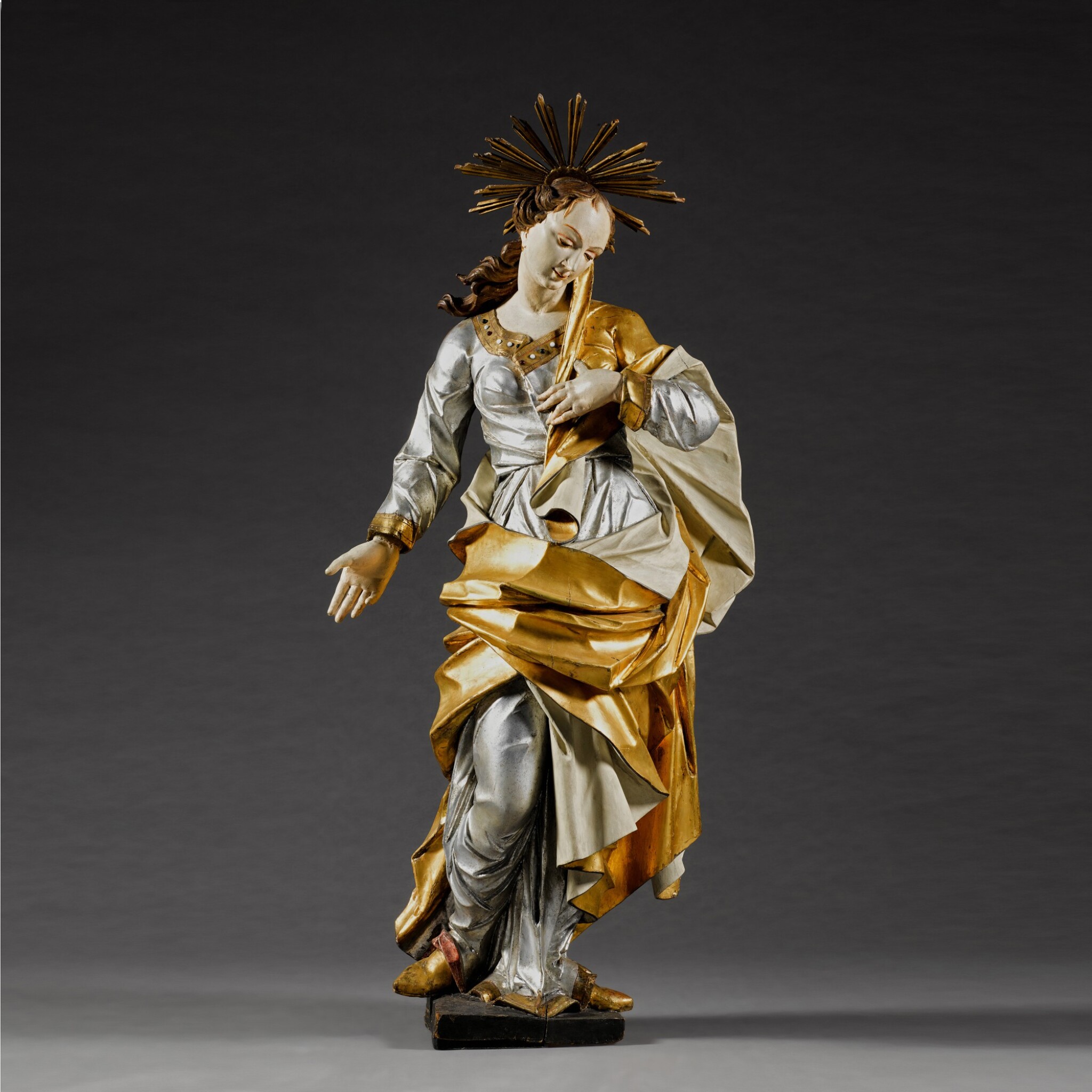 Overall the condition of the wood is good with minor dirt and wear to the surface consistent with age. There is minor stable splitting to the wood consistent with the material. There is a split to the centre of the base and the right corner has raised. Minor stable splits to the reverse and a few further in the drapery such as at the legs. There is a patch at the proper left shoulder. The sculpture is carved in sections: the proper right arm is carved separately. The sculpture has been cleaned. Some sections of original gilding have been lost and these have been regilded, such as in the folds of the drapery on the proper left side. General wear to the gilding and slivering with some relatively minor refreshment. Some minor losses to the polychrome/ gilding / slivering with different paint layers to the base. One of the glass beads at the collar is lost. Two metal mounts to the reverse and a drilled hole.

By repute the Church of St. Stephan, Mainz

Acquired for a church in Mainz-Amöneburg

This impressive German Rococo statue of the Virgin was attributed to Johann Kaspar Hiernle by Ludwig Baron Döry in his seminal 1984 essay on the sculptor and his brother Sebastian (d. 1755) (Döry, op. cit., pp. 219-220, 232). It was on long-term loan to the Landesmuseum, Mainz, before being sold at Sotheby’s in 2014.

Johann Kaspar Hiernle was the son of the celebrated late Baroque sculptor Franz Matthias Hiernle (1677-1732), a native of Bavaria who moved to Mainz and became court sculptor to Elector Lothar Franz von Schönborn (1655-1729). His success led to the creation of a dynasty for the family, with his sons Johann Kaspar and Sebastian receiving notable commissions in their own right.

The present figure is a particularly beautiful example of Johann Kaspar's work, with Döry commenting that, in its delicacy, grace and unity, it counts among the sculptor’s masterpieces (Döry, op. cit., p. 219). The Virgin is thought to have been made for the church of St Stephan, Mainz, which provided Johann Kaspar with numerous important commissions, including a statue of St. Bonifatius (for a complete list see Döry, op. cit., p. 232). In its facial physiognomy, with oval shaped head and long neck, it finds a close parallel in the sculptor's Immaculata surmounting the Quintin-Kirchhof in Mainz (1752) (Döry, op. cit., p. 209). Particularly attractive is the great swathe of cartaceous drapery which envelops the figure in what Dory describes as a 'chalice', with the effect that she appears almost pregnant (Döry, op. cit., p. 219). With its striking gold and silver polychromy, the Virgin is a powerful and beguiling illustration of German Rococo sculpture.