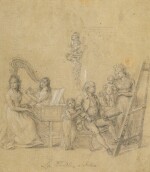 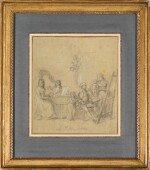 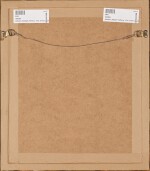 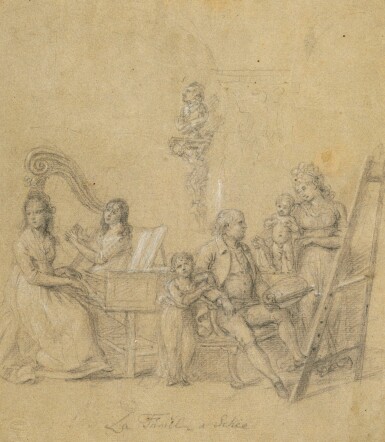 JOHAN JOSEPH ZOFFANY, R.A. | THE ARTIST AND HIS FAMILY

JOHAN JOSEPH ZOFFANY, R.A. | THE ARTIST AND HIS FAMILY

THE ARTIST AND HIS FAMILY

black and white chalks on paper

Zoffany shows himself seated at his easel, surrounded by his four daughters and a grandson. On the left, his eldest daughter, Maria Theresa (1777-1832), plays the harpsichord, while her sister, Claudina Sophia Ann (1791-1869), plucks at the harp. Holding the painter’s elbow is his youngest child, Laura (1791-1876), and on the right, Cecilia Clementina Elizabeth (1779-1830) - Zoffany’s second eldest daughter - stands holding an infant child who could be either her son Thomas Zoffany Horne (1800-1870), or John Zoffany Horne (1801-1804). On the wall behind the group, there is a bust whose features resemble those of Major-General Claude Martin (please see lot 42 for further information).

The drawing would seem to relate to an unfinished oil painting, which descended within the artist’s family and is now held in a private collection.1 That conversation piece’s composition differs in a number of ways from the present drawing, not least as both of Zoffany’s grandsons are included - Thomas standing on the extreme right and John in his mother’s arms.