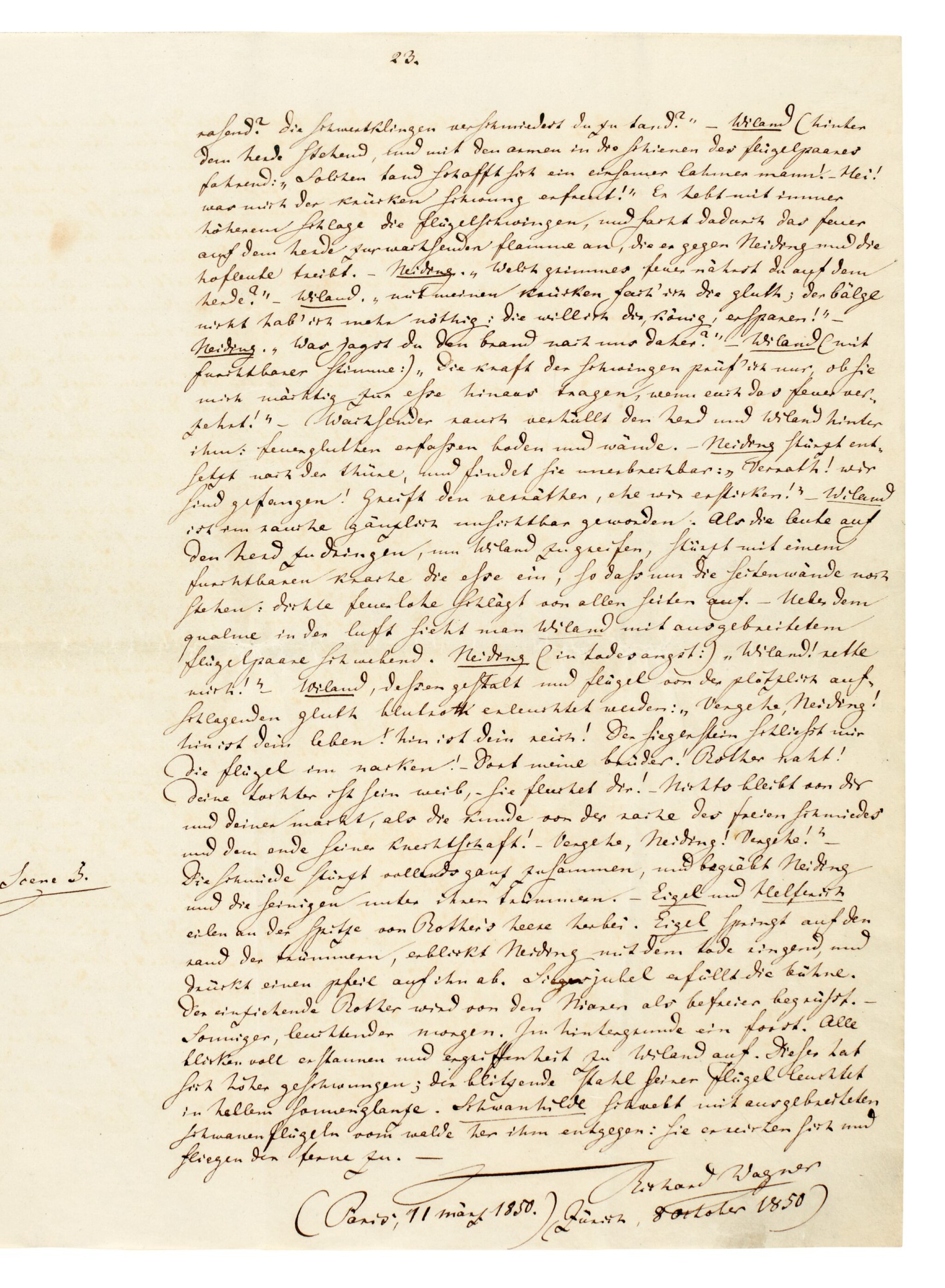 THIS IS WAGNER'S DETAILED SCENARIO FOR AN OPERA DESIGNED TO ENSHRINE HIS REVOLUTIONARY "MUSIC OF THE FUTURE". More than a mere synopsis, such manuscripts constitute draft librettos in prose form, describing the action and including a considerable amount of dialogue. Wagner made such prose drafts for all four operas of Der Ring des Nibelungen.

Wagner first envisaged Wieland der Schmied as an opera for Paris, given that German opera houses were closed to him, because of his political activism. Enthused by Berlioz's Symphonie Roméo et Juliette, and his own evolving theories of music and drama, he at first hoped that Berlioz would collaborate on this project. He offered the scenario both to Berlioz and to Liszt, but to no avail. Wagner seems to have sent the present manuscript to Carolyne zu Sayn-Wittgenstein, as explained in his letter to her, also dated 8 October 1850 (Sämtliche Briefe, iii, no.116), which Liszt acknowledged on 18 October.

Several themes in the scenario are rather familiar to us from Wagner's later music dramas, not least The Ring, including Princess Swanhilde, who is wounded by a spear, falls to earth and is rescued by the master-craftsman and blacksmith Wiland. She puts aside her wings and her magic ring of power. Wiland's enemies are called the Niedings, who steal the ring, kidnap Swanhilde and destroy his home. Wagner later changed Wiland's name to "Wieland", when he included the scenario in his Gesammelte Schriften und Dichtungen in 1872.

This projected three-act heroic opera occupied Wagner from late 1849, and is closely connected with the development of his revolutionary theories on music and drama. He included a précis of the subject as the appendix to his book Das Kunstwerk der Zukunft, suggesting it as a model subject matter for his ideal music-drama of the future. Wagner also decided to revolutionize his handwriting at this time, dispensing with the gothic Kurrentschrift that Germans had habitually used, and replacing it with Roman script. Indicative of Wagner's internationalist aspirations, even nouns are no longer capitalized, except for proper names, albeit inconsistently.