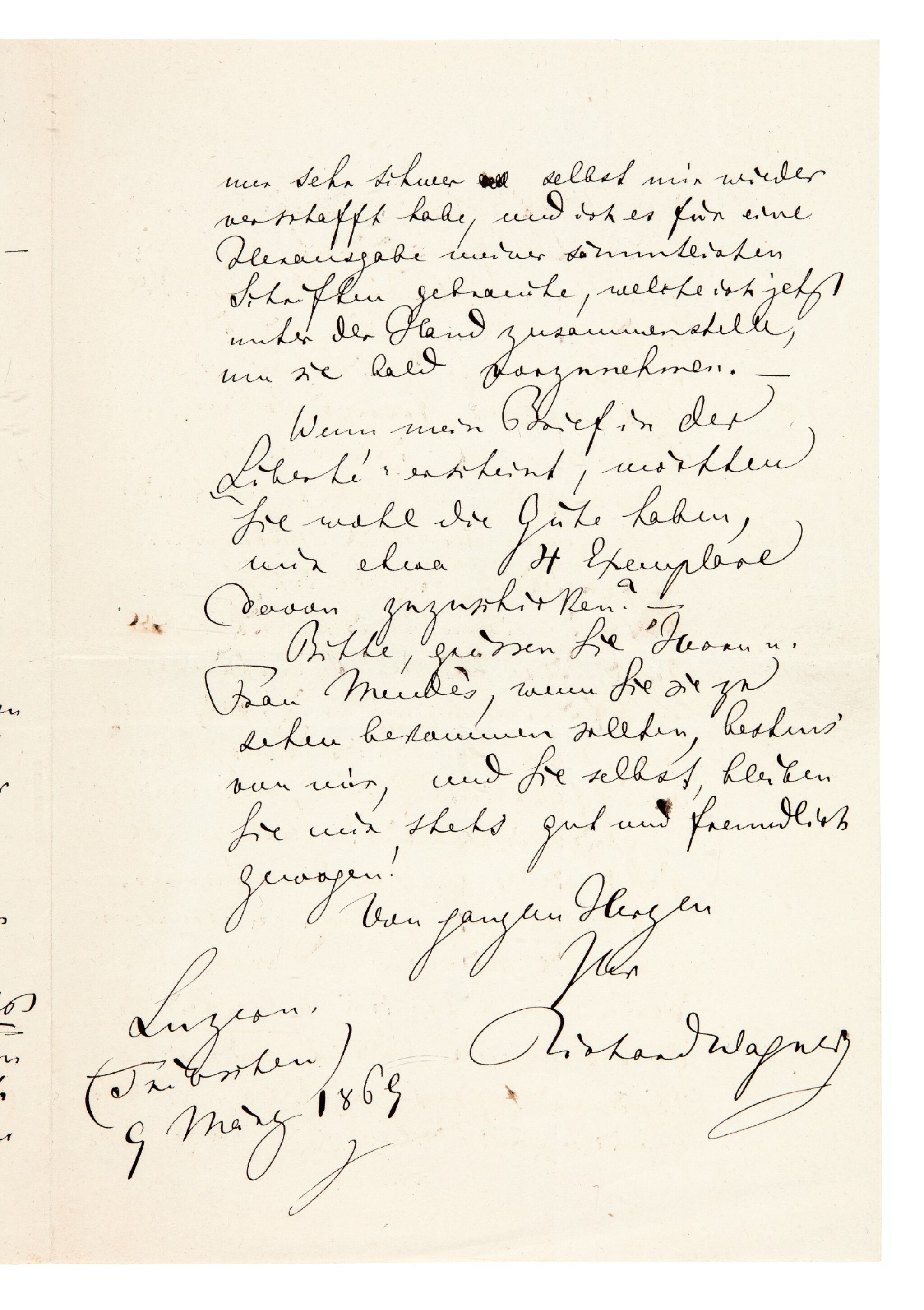 Autograph letter signed ("Richard Wagner"), to the journalist and philosopher Édouard Schuré, about Das Judenthum in der Musik, and Tannhäuser in Paris, 9 March 1869

thanking him for his charming description of Mrs Mendès (Judith Gautier), enclosing a copy of his latest "Broschüre" about Judaism and Music, which will tell him many things he cannot yet know, that the hard time he had in in Paris was due not to the French public, but to the German Jews working for Le Figaro etc; he is also enclosing an open letter (sent via Gautier) about the Paris production of Tannhäuser, which he originally wrote in German at the time (1861), asking him to return it once he has done with it, so that he can include it in the planned edition of his complete writings, to send him four copies of the letter as it appears in La Liberté and to convey his greetings to Mr & Mrs Mendès ("...werden Sie ersehen, dass ich--gerade auch in Paris--durchaus nicht mit dem französischen Publikum, sondern mit den deutschen Juden es zu thun habe. Fragen Sie um nach, wer diese Herren im “Figaro” u.s.w. sind, und sie werden sehen, dass sie alle diese gewissen deutschen Juden-Namen, à la “Wolf”, “Hirsch” “Bär” u.s.w. (mitunter französisch) tragen…")

Wagner’s notorious antisemitic diatribe "Das Judenthum in der Musik" originally appeared in the Neue Zeitschrift für Musik in 1850, and was later published separately as the pamphlet sent to Schuré, issued to coincide with the first Paris production of Rienzi at the Théâtre-Lyrique on 6 April. Judith Gautier had intended to write an article to mark Wagner’s expected arrival. Instead the composer sent her the letter mentioned here, explaining his reasons for not attending Rienzi, which was published as he intended in the journal La Liberté on 10 March (as "Une lettre de Richard Wagner"). Édouard Shuré (1841-1929), a historian who championed Wagner’s cause in France, was the author of Le drame musical. Richard Wagner, son œuvre et son idée, in 2 volumes (1875).