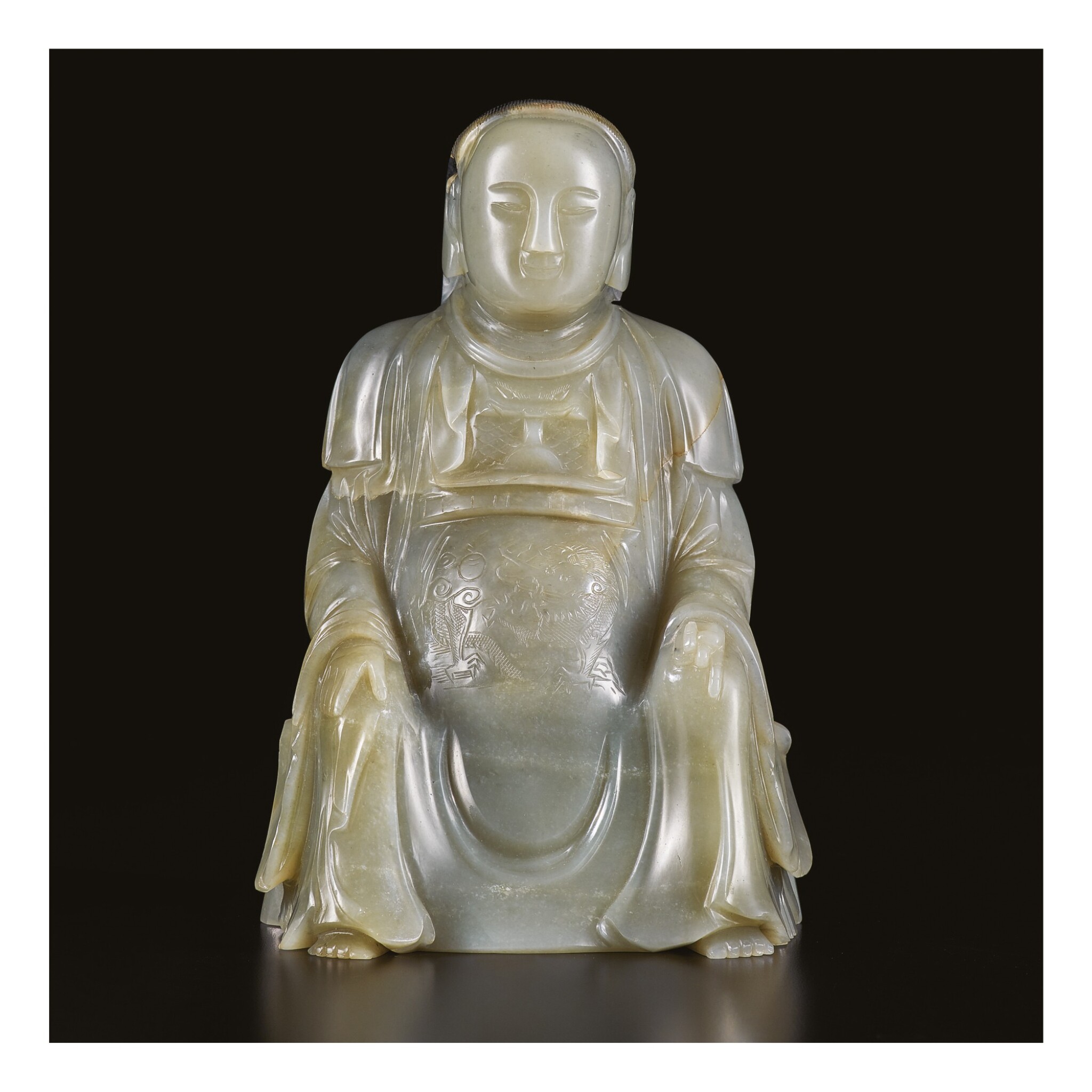 seated upright on a platform with the feet bare and shoulder-width apart and the hands resting on the knees, the left hand posed in karana mudra, the face directed forward with a calm expression framed by straight hair neatly combed down the back, wearing a long and layered robe draped over an armor decorated with a court belt and a dragon roundel, the back of the body has an oblong aperture, the back of the base inscribed with daming Hongzhi banian Zhuyuan zaoxiang (the 8th year of the Hongzhi reign, 1495, made by Zhu Yuan), the stone of grayish celadon tone with opaque white inclusions, black and russet spots

In overall good condition with some minute chips and nicks and minor bruises to the extremities, as can be expected. The stone with some natural fissures. A short horizontal tool mark above the left shoulder, likely original.

Imperial patronage of Daoist institutions, rituals, and deities reached a zenith in the Ming dynasty. Along with this came the construction and renovations of temples, the compilation and publication of new editions of Daoist scriptures, and the commissioning of sculptures, paintings, and ritual implements to support the expanding devotional practices. Among the principal subjects of worship was the Daoist god, Zhenwu (Perfected Warrior), who was associated with the sacred Wudang Mountain range. The mythology surrounding Zhenwu originated in the Warring States period (475-221 BC) when he was known as Xuanwu (Dark Warrior) and was represented by a tortoise entwined with a snake and associated with the north. Around the tenth century, he developed an anthropomorphic martial identity and his celestial image began to be depicted with long, unbound hair, a black robe, and armor. In this martial form, Zhenwu served as a guardian of the land and people, an authority granting legitimacy to rulers, and a provider of apotropaic and benevolent deeds to all members of society.

Although Zhenwu enjoyed imperial sponsorship in the Song through Yuan dynasties, it was during the Ming dynasty he received the greatest attention. His image proliferated in the fifteenth century, starting with the Yongle Emperor (r. 1402-1424) whose dream of Zhenwu inspired him to usurp the throne for himself, and subsequently commission the Da Ming Xuantian shangdi ruying tulu (Records and Pictures of Auspicious Responses by the Emperor of the Dark Heaven in the Great Ming) which visually and textually chronicles Zhenwu's miracles. The Yongle Emperor also declared Wudangshan the most sacred mountain in the country, renamed it Taiheshan (Mountain of Supreme Harmony), and funded numerous temples, rituals, and images in the deity's honor. In 1416, the Yongle Emperor commissioned a massive bronze sculpture of Zhenwu for the Jindian (Golden Hall) in the Taihe gong(Palace of Supreme Harmony) on Mount Taiheshan, which is illustrated in Royal Taste, The Art of Princely Courts in Fifteenth-century China, John and Mable Ringling Museum of Art, Sarasota, 2015, fig. 3-9. This sculpture served as a model for other fifteenth century images of the deity, including the present jade sculpture which similarly shows Zhenwu seated with a commanding posture, the feet bare and set wide apart, the long hair slicked back, and wearing a set of armor over a long robe.

It is rare for Ming dynasty jade carvings of Daoist figures to bear dated inscriptions, however, the present sculpture bears an affinity with contemporaneous jade carvings of deities, and with dated Ming sculptures in other mediums. Compare the finely delineated hair, the elegant yet simply defined facial features, and the folds of the drapery to two Ming dynasty jade figures of Guanyin in the Qing Court Collection published in The Complete Collection of Treasures of the Palace Museum. Jadeware (II), Hong Kong, 1995, pls 216-217; and a small jade carving of Shoulao with a deer in the same collection, published in Compendium of Collections in the Palace Museum: Jade, Ming Dynasty, vol. 6, Beijing, 2011, pl. 278. These stylistic features also appear in a 16th/17th century large bronze figure of the Daoist god of Culture and Literature, Wenchang Wang, offered in our Paris rooms, 15th December 2016, lot 144. Dated metal sculptures of the Ming dynasty similarly exhibit the refined economy of detail seen in the present figure, including a massive bronze torso of Buddha dated to the tenth year of the Hongzhi emperor's reign (1497), sold at Christie's South Kensington, 9th November 2000, lot 298; a cast-iron figure of a luohan dated to the seventh year of the Hongzhi reign, corresponding to 1494, sold at Christie's London, 19th June 2001, lot 114; a cast-iron luohan dated to the fourteenth year of the Hongzhi reign (1501), sold at Christie's London, 6th November 2007, lot 117; and a bronze figure of the Daoist deity Bixia Yuanjun dated to the first year of the Jiajing reign, corresponding to 1522, sold in our London rooms, 16th May 2012, lot 227.