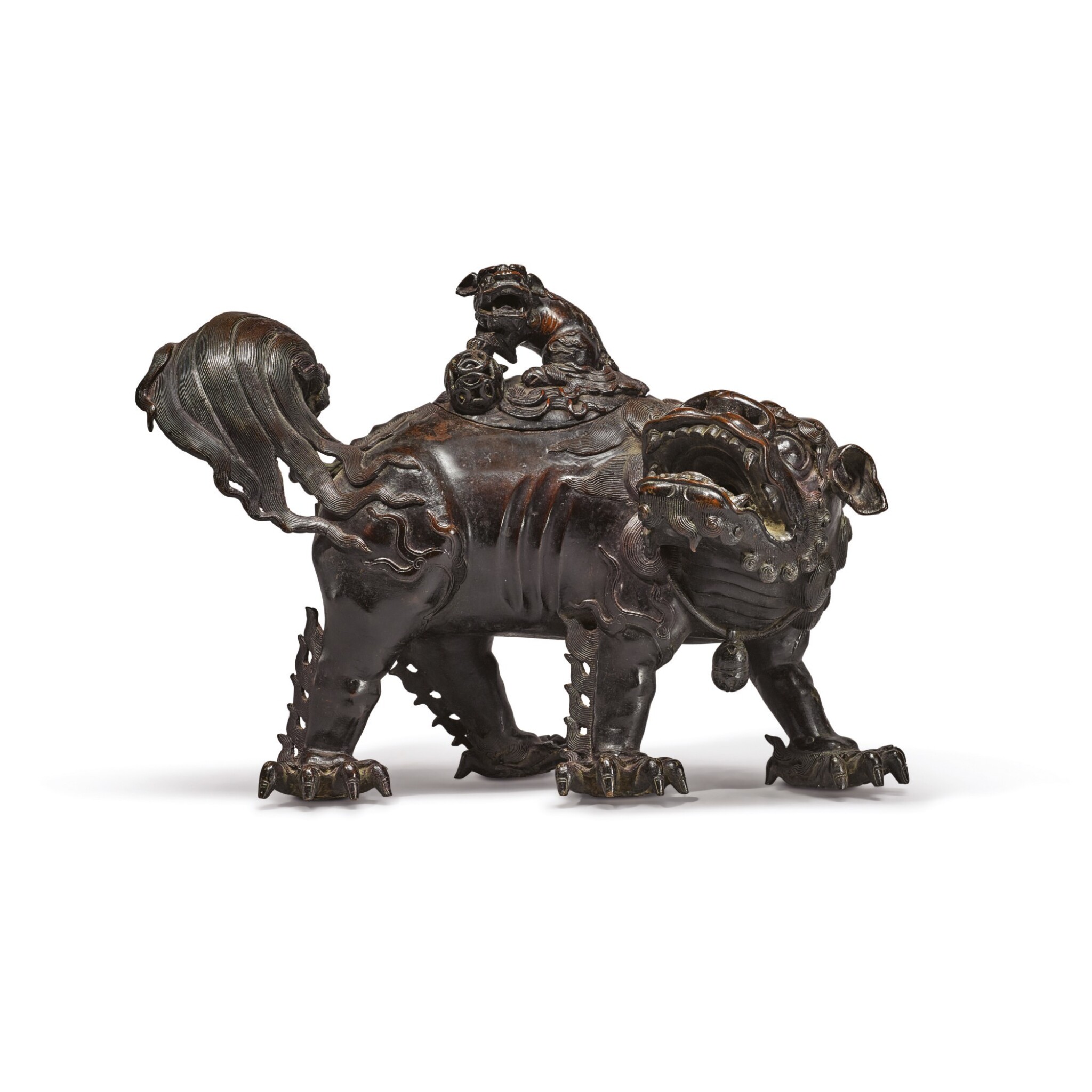 the ferocious beast prowling with the body turning to the right and the head lifted with the nostrils flaring and the open mouth letting out a roar, the bulging eyes glaring upward beneath the furrowed brow and tufts of curling fur, framed on either side by trefoil ears falling back from the movement, the muscular body with flame scrolls rising in high relief from the shoulders and hips, openwork flame-like fur forming a ridge along the backs of the legs, the five claws on each paw arched ready for attack, the bushy tail raised and swept to one side, the oval cover at the center of the beast's back cast with a smaller seated Buddhist lion grimacing and pawing a brocade ball, the patina a lustrous dark chocolate-brown (2)

The front proper left leg has a cast repair (approx. 1.5 x 1.5 cm) and there are a few very minor scattered losses along the edges and expected surface wear.

This impressive censer is skillfully cast in the form of a menacing lion moving at a steady gait. Its vitality and strength are conveyed through the muscular body and expressive pose, while its ferociousness is immediately sensed through the gaping mouth that reveals the animal’s teeth. Carefully-rendered details, including the spiralling eyebrows, notched spine and naturalistic rendering of the tail evidence the craftsmen's technical and artistic virtuosity with this medium.

This lion is particularly special for its unusual stance and large size and no other closely related example appears to have been published. A smaller lion cast in a similar pose was sold in our London rooms, 11th November 2015, lot 124. See also a censer in the form of a lion standing and carrying a foreigner, sold in our London rooms, 12th June 2003, lot 83, and again in our Hong Kong rooms, 8th April 2014, lot 210. Compare also a lion censer, seated and with a detachable head, from the collection of Kevin Ching, included in the Min Chiu Society exhibition The Radiant Ming 1368-1644, Hong Kong Museum of History, Hong Kong, 2015, cat. no. 279.

Revered for their strength and spiritual essence, lions were considered mythological guardians with the divine power to ward off evil spirits. While the origins of censers cast as lions is difficult to determine, they gained much popularity in the early Ming dynasty (1368-1644). Unlike this piece that is cast with the lid on the animal’s back, censers in the form of lions were generally made with a detachable head and depicted seated. The hollowed interior was filled with charcoal, sandalwood or musk, and when incense was lit, smoke emerged through the beast’s mouth, giving the impression of a living creature breathing smoke.

The dating of this lot is consistent with the result of a thermoluminescence test Re. S. Artes, no. C141387B-1.