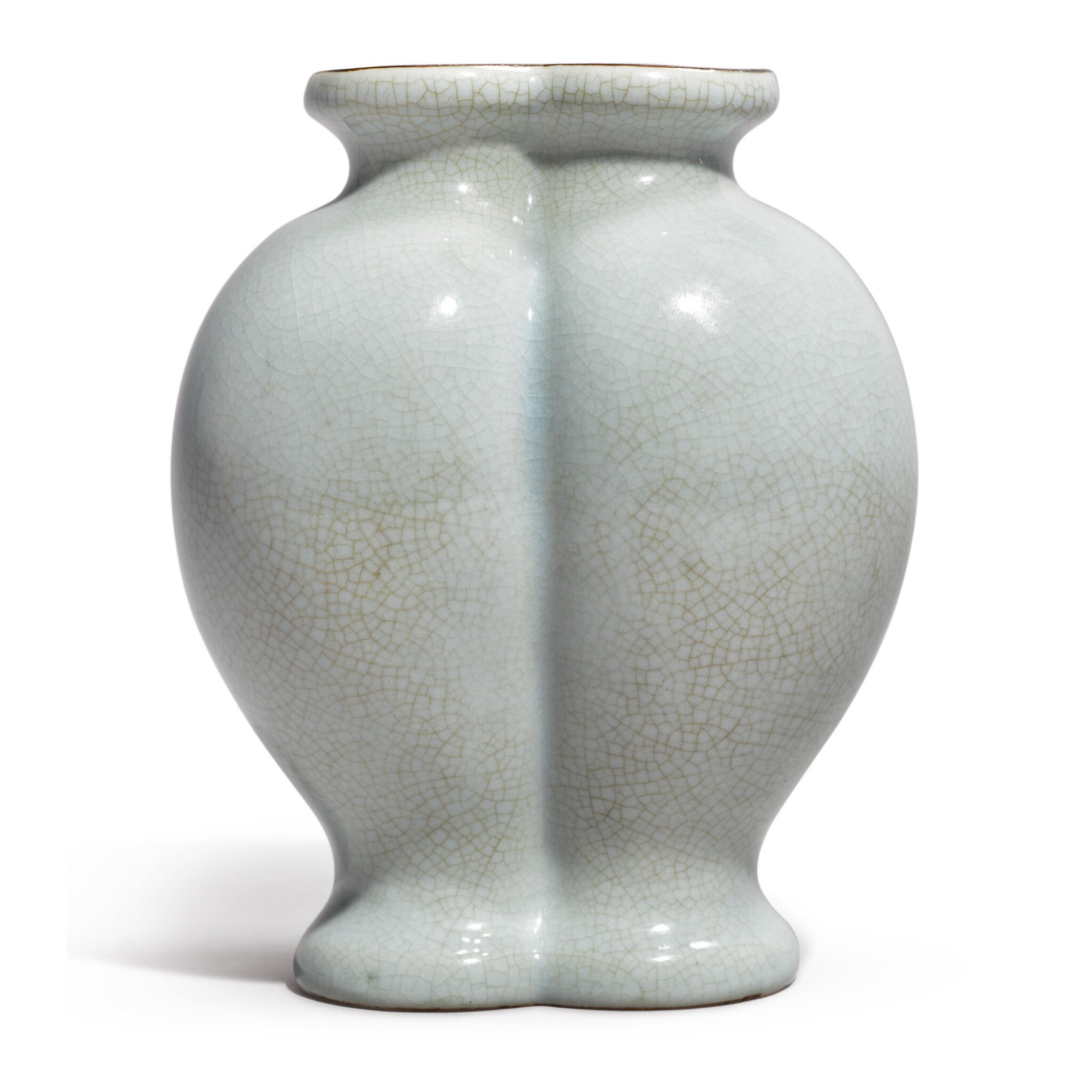 formed of two adjoined baluster vases, each with a broad swelling shoulder rising from a splayed foot to a contracted neck and galleried rim, applied overall with an unctuous caesious-colored glaze suffused with a fine crackle, the knife-pared foot and mouth rim applied with a brown wash, the base with the six-character seal mark inscribed in a horizontal line in underglaze blue

A 0.9cm long chip to mouthrim along with several other tiny chips. There's a burst glaze bubble to the interior of the mouthrim.

Conjoined vases, incorporating sections of two or more shapes to create a single vessel, were among the most technical challenging wares produced by the imperial kilns during the Qianlong period. The double-vase form is mostly commonly associated with enameled porcelain, including the famous European-subject falangcai double-vase in the Eisei Bunko Museum, Tokyo, illustrated in Toji taikei [World Ceramics. Qing Official Kilns], vol. 46, Tokyo, 1973, pl. 23. Compare also the famille-rose 'boys' vase and cover of the same form, illustrated in The Complete Collection of Treasures of the Palace Museum. Porcelains with Cloisonne Enamel Decoration and Famille Rose Decoration, Hong Kong, 1999, pl. 26. Only one other Qianlong mark and period conjoined vase with a monochrome glaze is known, also with the same Ru-type glaze, acquired by the Metropolitan Museum of Art, New York, in 1879 (acc.no. 79.2.952) (fig. 1).

The form was also reproduced in enameled metal and glass. Compare a Beijing enameled vase illustrated in Enameled Wares in the Ming and Ch'ing Dynasties, The National Palace Museum, Taipei, 1999, cat. no. 124; a red overlay glass example in the Palace Museum, Beijing, illustrated in Zhang Rong, Luster of Autumn Water: Glass of the Qing Imperial Workshop, Beijing, 2005, pl. 53.

Ian Thomas earned international renown as Queen Elizabeth II's dress designer for over 20 years. Born in Oxford in 1929, he worked as an apprentice to the designer Norman Hartnell, where he worked on Queen Elizabeth II’s coronation robes. After 17 years working for Hartnell, Thomas opened his own couture business in Belgravia, in 1969. Under his own label he dressed many members of the royal family. Thomas was awarded a Royal Warrant as dressmaker in 1973.