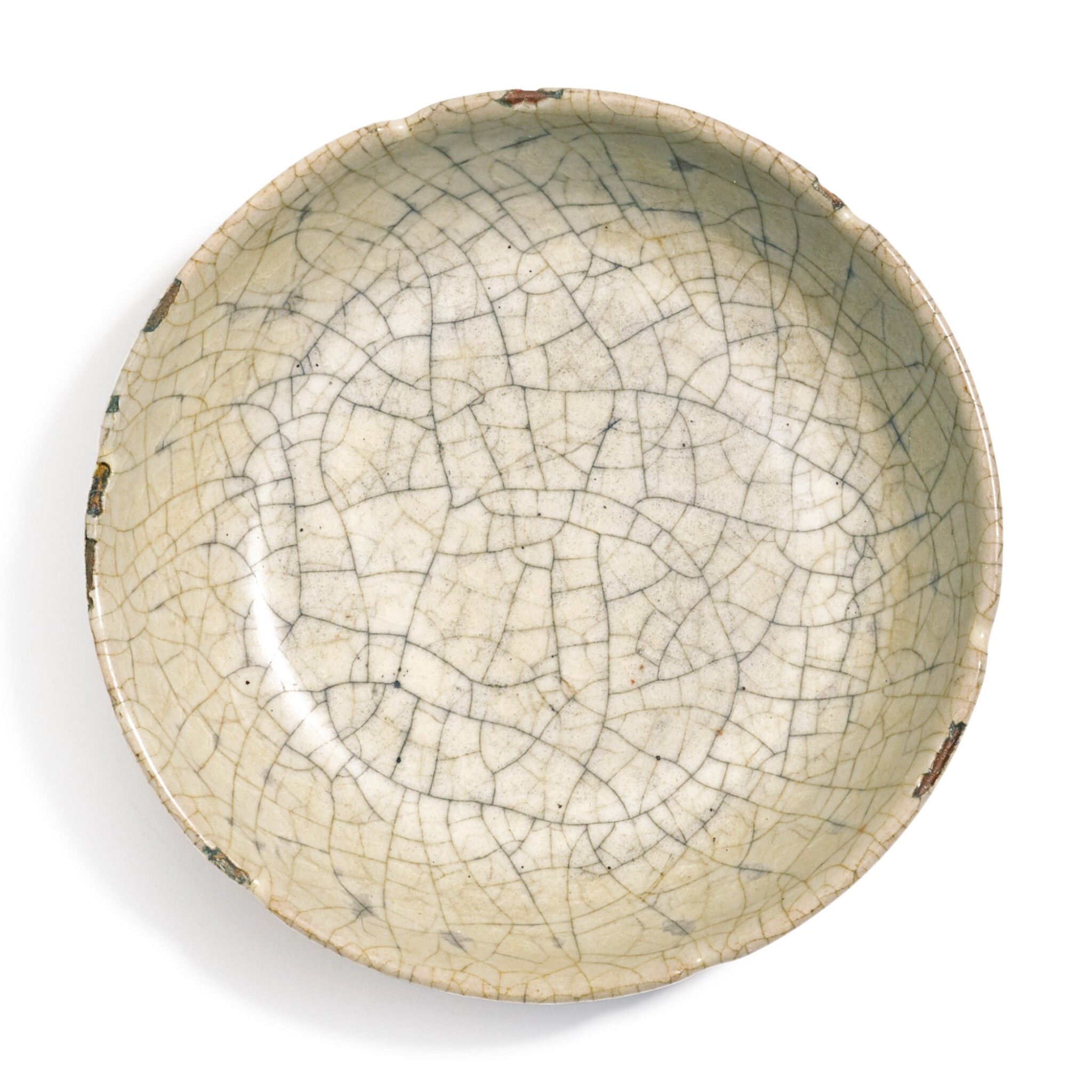 elegantly potted, the shallow flaring sides rising from a flat base sweeping up to a rim divided into six lobes, the body covered in an unctuous thick pale beige glaze suffused with a matrix of gold and black crackles, the base with five 'sesame-seed' spur marks

There is some fritting around the rim, the largest measuring approx. 1.2 cm wide. Otherwise, the washer is in overall good condition with some minor wear and firing imperfections, as can be expected. The surface possibly has been cleaned and polished.

In its seeming simplicity, the present washer encapsulates the spirit of the famous Guanyao, the fabled ‘official ware’ specially created for the imperial court of the Southern Song (1127-1279) in Hangzhou, Zhejiang of south China. The gently lobed form and unctuous glaze suffused with a fine interlaced network of crackle could only be achieved through highly sophisticated techniques, and as such, Guan wares made for the Southern Song court, as well as their later Yuan and Ming dynasty versions were made in very small numbers.

Guan ware was already celebrated in contemporary texts of the Southern Song period. It showcases Chinese potters' technical mastery and aesthetic vision. Like great artists and artisans anywhere, they captured – perhaps inadvertently – the zeitgeist of the period in their creations. The works of art they conceived embodied the leitmotifs of China’s highly educated scholar-officials, the non-aristocratic ruling elite of the Song (960-1279). The unctuous glaze of the present washer with its smooth pleasing texture and subtle gloss was achieved through gradual application of multiple layers and presumably successive firings. The thick coating thus softly envelopes the elementary form to create an object that is pleasing to touch. The distinct web of veins of the large-scale crackle was caused by different degrees of shrinkage between the glaze and body material, achieved through a well-controlled cooling process after the last firing and subsequent staining. The lines move through the glaze in a naturalistic manner, giving the whole piece the illusion of being carved out of a pebble of jade. The dark blackish body visible at the foot adds depth to the glaze and gravitas to the whole object, as it subtly accentuates the shape. In the Qing dynasty (1644-1911), when Guan ware was much copied by the imperial kilns of Jingdezhen in Jiangxi province, this dark stoneware body was generally imitated by coating Jingdezhen’s white porcelain with a blackish-brown slip before glazing.

Washers of this form are extremely rare and are inspired by Guan Song prototypes; see Guan Song prototypes in the Palace Museum, Beijing, illustrated in Guanyao ciqi / The Guan Kilns, Beijing, 2016, pl. 20, together with one with slightly shorter and rounder sides and unglazed foot, pl. 19, and its Ming counterpart, pl. 52 (fig. 1); and another in the National Palace Museum, Taipei, attributed to the Southern Song - Yuan dynasty, included in the exhibition Precious as the Morning Star. 12th-14th Century Celadons in the Qing Court Collection, National Palace Museum, Taipei, 2016, cat. no. IV-3 (fig. 2). Compare also a Ge example of similar form but with shortened sides and an unglazed foot, attributed to the Southern Song dynasty, in the Palace Museum, Beijing, published in Selection of Ge Ware. The Palace Museum Collection and Archaeological Discoveries, Beijing, 2017, pl. 20.