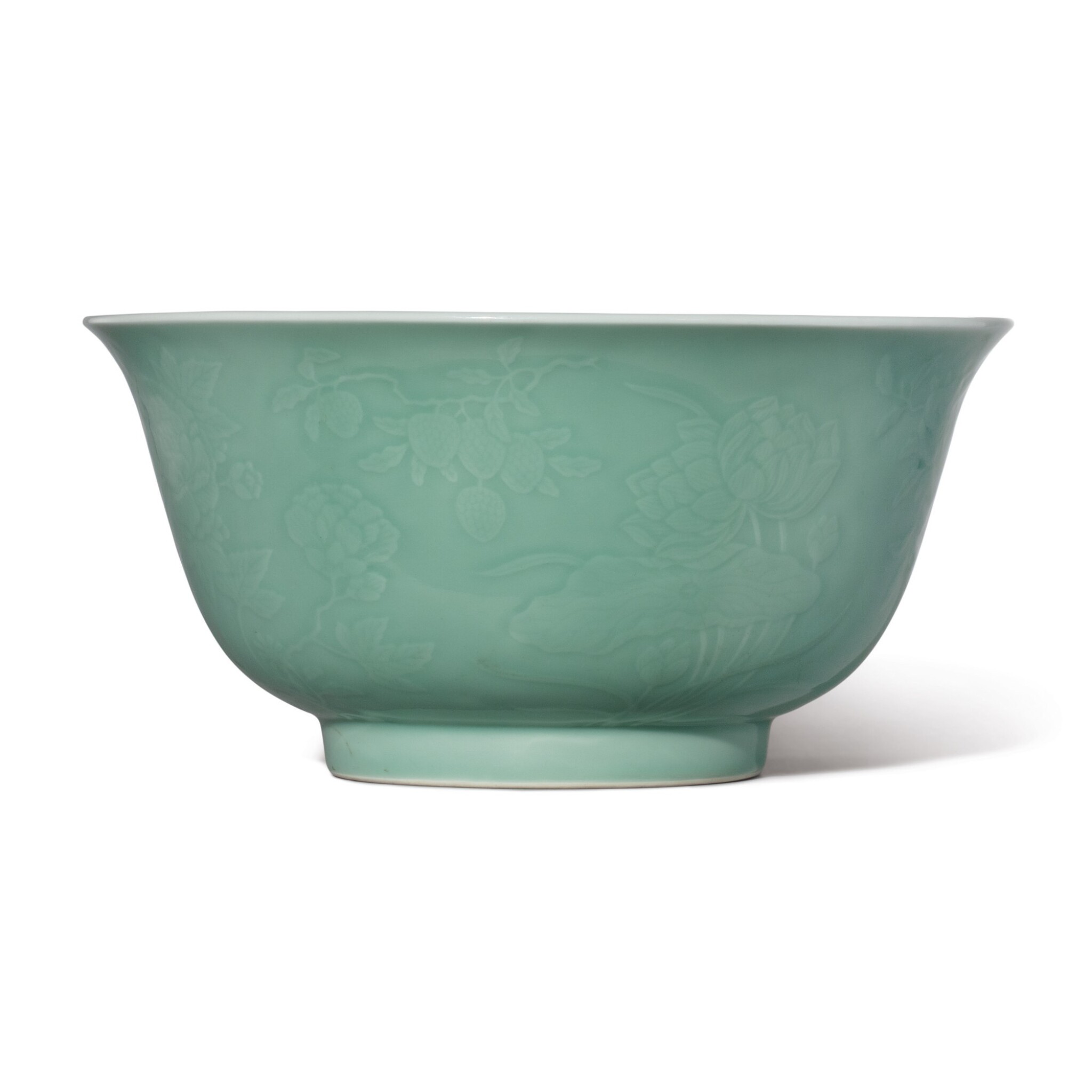 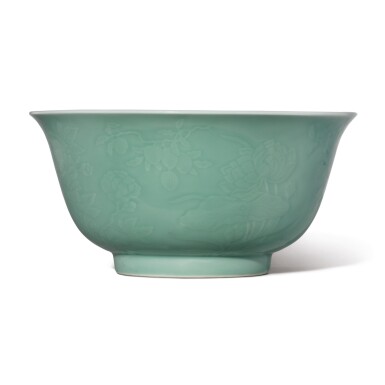 the deep rounded sides rising from a slightly tapered foot to an everted rim, the exterior finely molded and decorated in white slip with sprays of pomegranate, peaches, lychee, and ‘Buddha’s hand’ citron suspended above resplendent boughs of auspicious flowers including, peony, lotus, prunus, and aster, covered overall in a lustrous celadon glaze save for the rim and footring, the base with a six-character seal mark in underglaze blue, wood stand (2)

In overall good condition with a few minor firing imperfections. The surface with light wear and minor scratches.

The present example belongs to a rare group of large celadon-glazed bowls decorated to the exterior with fruiting and flowering auspicious plants in shallow relief. These bowls were made during the Yongzheng (r. 1723-1735) and Qianlong (r. 1735-1796) reigns and each bears the respective emperor’s seal mark in underglaze blue on the base. The pair to this bowl, also from the collection of Dr. and Mme. Ho-Ching Yang, was sold in these rooms, 16th September 2009, lot 218.

Compare also a Qianlong period bowl of this type, but with a white interior, in the collection of the Tsui Museum of Art, illustrated in The Tsui Museum of Art, Hong Kong, 1991, pl. 127. A closely related bowl from the Meiyintang Collection sold in our Hong Kong rooms, 9th October 2012, lot 33; and a third sold at Christie’s Hong Kong, 30th May 2006, lot 1349. For examples with a Yongzheng seal mark, see a bowl in the collection of Anthony Gustav de Rothschild illustrated in Regina Krahl, The Anthony de Rothschild Collection of Chinese Ceramics, vol. 2, London, 1996, cat. no. 144; one from the collection of the British Rail Pension Fund that sold in our Hong Kong rooms, 16th May 1989, lot 57; and another that sold at Christie’s New York, 18th September 2003, lot 350.

Ho-Ching Yang (1900-1964) studied at Tongji Medical College in Shanghai and went on to earn a second medical degree from Rostock University in Germany, where he graduated with the highest honors with a specialization in otolaryngology. Subsequently, he and his wife, Madame Von Sung Yang (1903-2005), moved to Suzhou, where Dr. Yang began his practice, and the couple engaged in the cultural life of the city and embarked on a lifelong pursuit of collecting Chinese porcelain. In 1937, Dr. and Mme. Yang moved to London with their six children, and two years later the family relocated to New York. There, Dr. Yang became a prominent stock broker, and served as Vice President and a member of the Board of Directors at a prominent Wall Street firm. In New York, Dr. and Mme. Yang's passion for the arts and culture flourished. They avidly collected Chinese porcelain and dedicated themselves to supporting the Chinese community, most notably through their involvement in the China Institute in America, where Dr. Yang served as President of the Board of Trustees, and Mme. Yang served as a Trustee.