PROPERTY DEACCESSIONED FROM A SOUTHERN INSTITUTION 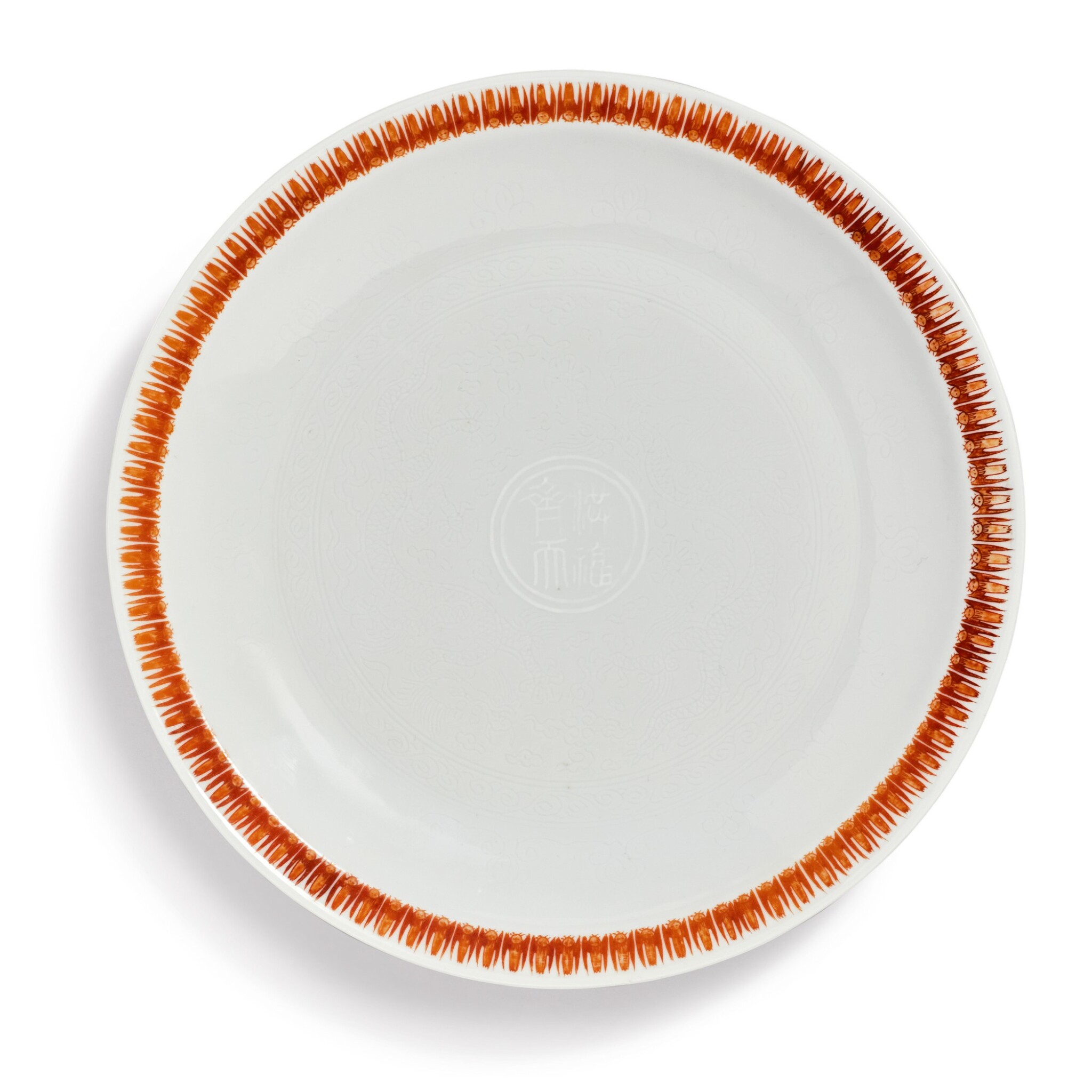 PROPERTY DEACCESSIONED FROM A SOUTHERN INSTITUTION

finely potted with shallow rounded sides rising to an everted rim painted in iron red with a band of stylized bats, the center slip-decorated with a double circle enclosing the characters hong fu qi tian ('happiness as vast as the heavens') in thread relief, flanked by two delicately incised striding five-clawed dragons within a classic scroll border and band of lotus, the base with a six character reign mark in underglaze blue within a double circle

The dish in good overall condition. The surface with expected light wear and a few minor firing imperfections including scattered pinpoint iron spots, and a few tiny nicks to foot ring.

Gifted to a Southern Institution in 1982.

This refined dish with its spare and auspicious decoration is part of a set made at the imperial kilns in Jingdezhen and most likely commissioned to celebrate the 60th birthday of the Kangxi emperor in 1713. Rosemary Scott in For the Imperial Court: Qing Porcelain from the Percival David Foundation, London, 1997, p. 48 suggests that these dishes may not have been used during the imperial banquets but, perhaps presented to esteemed guests as commemorative gifts.

A similar dish is in the Shanghai Museum, Shanghai and illustrated in Kangxi Porcelain Wares from the Shanghai Museum Collection, Hong Kong, 1998, pl. 186. Another example is published in Regina Krahl, Chinese Ceramics from the Meiyintang Collection, vol. 2, London, 1994, pp. 154-5, no. 786 where the author comments on the auspicious decoration as it forms a homophone for 'red bats arranged in order on the sky.' A dish of this type was sold twice in our Hong Kong rooms, first on 5th June 1997, lot 1487 and again 2nd June 2016, lot 896. See also a related dish, decorated with a central roundel enclosing a shou character, in the Palace Museum, Beijing illustrated in The Complete Collection of Treasures of the Palace Museum, Miscellaneous Enamelled Porcelains Plain Tricoloured Porcelains, Hong Kong, 2009, pl.18.