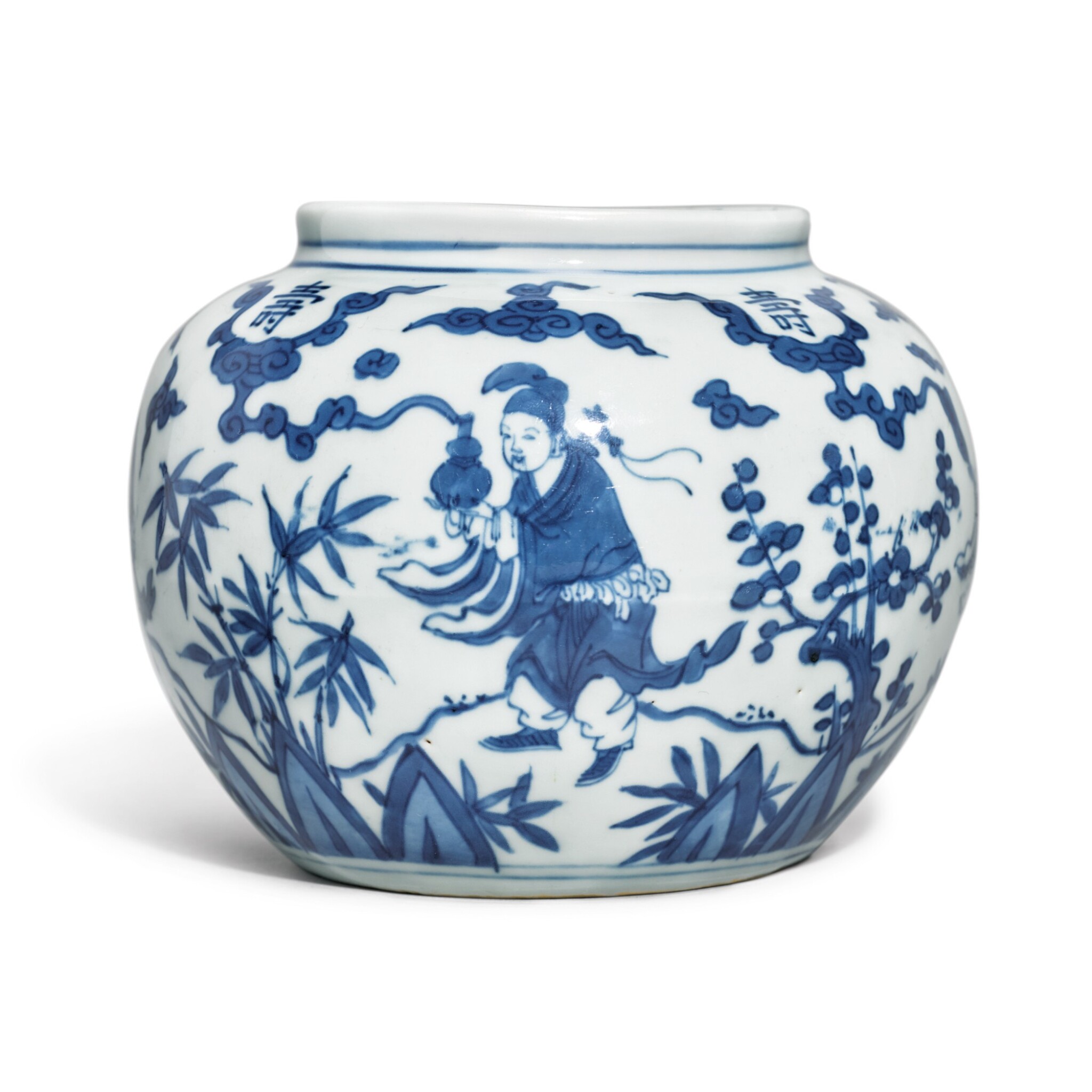 A SMALL AND RARE BLUE AND WHITE 'DAOIST IMMORTALS' JAR

the squat ovoid body boldly painted in inky blue tones of underglaze blue with a continuous scene depicting four of the Eight Immortals, including Liu Hai and Li Tieguai, traversing a landscape interspersed with bamboo, prunus, lingzhi and pine, each carrying their respective attribute dispensing swirling vapor supporting shou characters, the short mouth encircled by a double-line border, repeated above the foot, the six-character reign mark arranged in a circle to the countersunk base

In overall good condition, the rim lightly polished and slightly warped. With wear to the surface typical of the age and with minor firing imperfections.

Richly painted with a processional scene of four Daoist immortals, the present lot belongs to a small group of similarly painted jars produced during the Jiajing and Wanli periods. A jar of the same design and with the Jiajing reign mark similarly arranged in a circle from the Qing Court Collection is illustrated in The Complete Collection of Treasures of the Palace Museum. Blue and White Porcelain with Underglaze Red (II), Hong Kong, 2000, pl. 99. Three Wanli mark and period jars of this type have sold in our London rooms, the first 18th May 1971, lot 195; the second 19th June 1984, lot 262 and the third 10th June 1986, lot 235.

A related group of slightly larger lobed jars painted with the same subject are also known to have been produced in both the Jiajing and Wanli periods. See a Jiajing mark and period example from the Riesco Collection, included in the exhibition Chinese Blue and White Porcelain, Oriental Ceramic Society, London, 1953, cat. no. 163, subsequently sold in our London rooms, 11th December 1984, lot 323. Two further examples were sold in our Hong Kong rooms, 28th November 1979, lot 97 and 28th April 1992, lot 43; and a third was sold in these rooms, 16th September 2009, lot 189. A Wanli mark and period example was sold in our London rooms, 18th June 1968, lot 51.