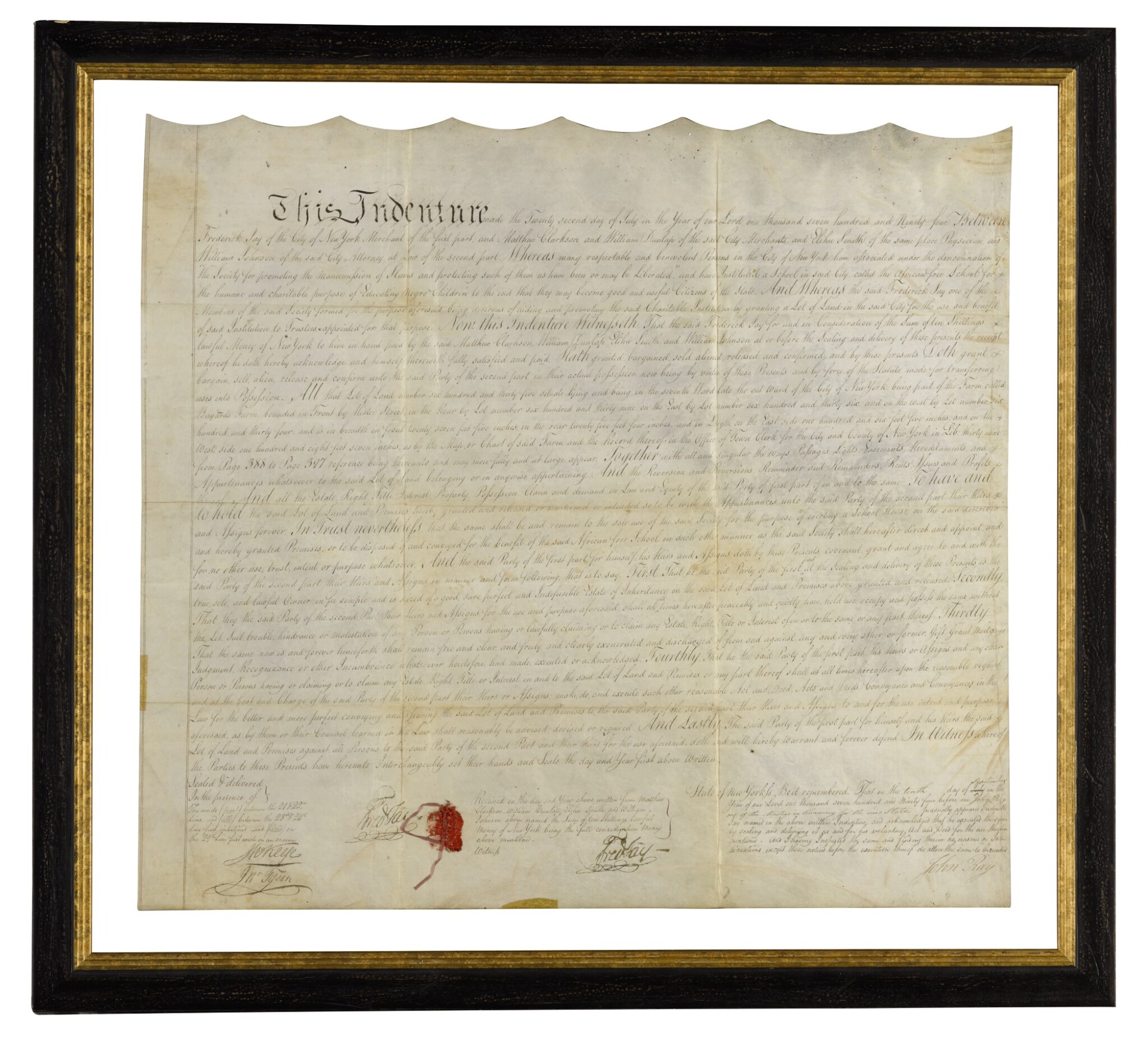 A remarkable document granting land for the use and benefit of the African Free School — founded by Alexander Hamilton, John Jay, and others — marking the establishment of the first such school in America

'Whereas many respectable and benevolent Persons in the City of New York have associated under the denomination of "the Society for promoting the manumission of Slaves and protecting such of them as have been or may be Liberated," and have Instituted a School in said City, called the African Free School for the humane and charitable purpose of Educating negro Children to the end that they may become good and useful Citizens of the State.'

The New York Manumission Society—which was formed in 1785 by some of New York's most elite and influential citizens, including John Jay and Alexander Hamilton—established the African Free School with the aim, as they perceived it, of educating black children so that they might take their place as equals to white Americans. In essence, the mission of the Manumission Society in forming the school was school was to validate the tenet set forth in the Declaration of Independence just a few years before, that "all men are created equal." The Society also felt that education was an essential element in creating a populace capable of sustaining and furthering a democracy.

In addition to Hamilton and Jay, the New York Manumission Society counted luminaries as George Clinton, John Murray, Melancton Smith, and James Duane among its founding members. At a time when slavery was integral to the expansion and prosperity of New York⁠—and, indeed, America at large⁠—these Founding Fathers and others began their mission of abolishing slavery in the state of New York by protesting the relatively common practice of kidnapping black New Yorkers—slaves and free men and women alike—in order to sell them into servitude elsewhere. The Society also provided legal assistance to free and enslaved blacks who were being abused.

The African Free School was instituted on 2 November 1787, and, as the document shows, land for one location was acquired in 1794. A single-room schoolhouse was erected in lower Manhattan (what is now SoHo), with around forty students, the majority of whom were the children of slaves, in attendance. The members of the Manumission Society raised funds—or, in many instances, provided the means themselves—for teachers' salaries, supplies, and, eventually, for the creation of new buildings need to house the growing student population. In 1809, the trustees of the school hired Charles Andrews, who championed the idea that black students were just as intelligent as white. Under his ardent leadership the school experiences significant expansion, with enrolment reaching 700 students by the end of his tenure. Ultimately, however, Andrews' leadership proved problematic, as his appointment meant the displacement of the school’s black headmaster. Andrews was forced to resign his post after it was revealed that he supported efforts to send African Americans to Africa.

The school grew from a single-room schoolhouse with 40 children in the 1790s to a network of seven schools educating more than 1,400 students. In 1835, the African Free School was absorbed into the New York City public school system having educated thousands of children, many of whom went on to become prominent abolitionist, artists, and entrepreneurs.

A landmark in African American Education