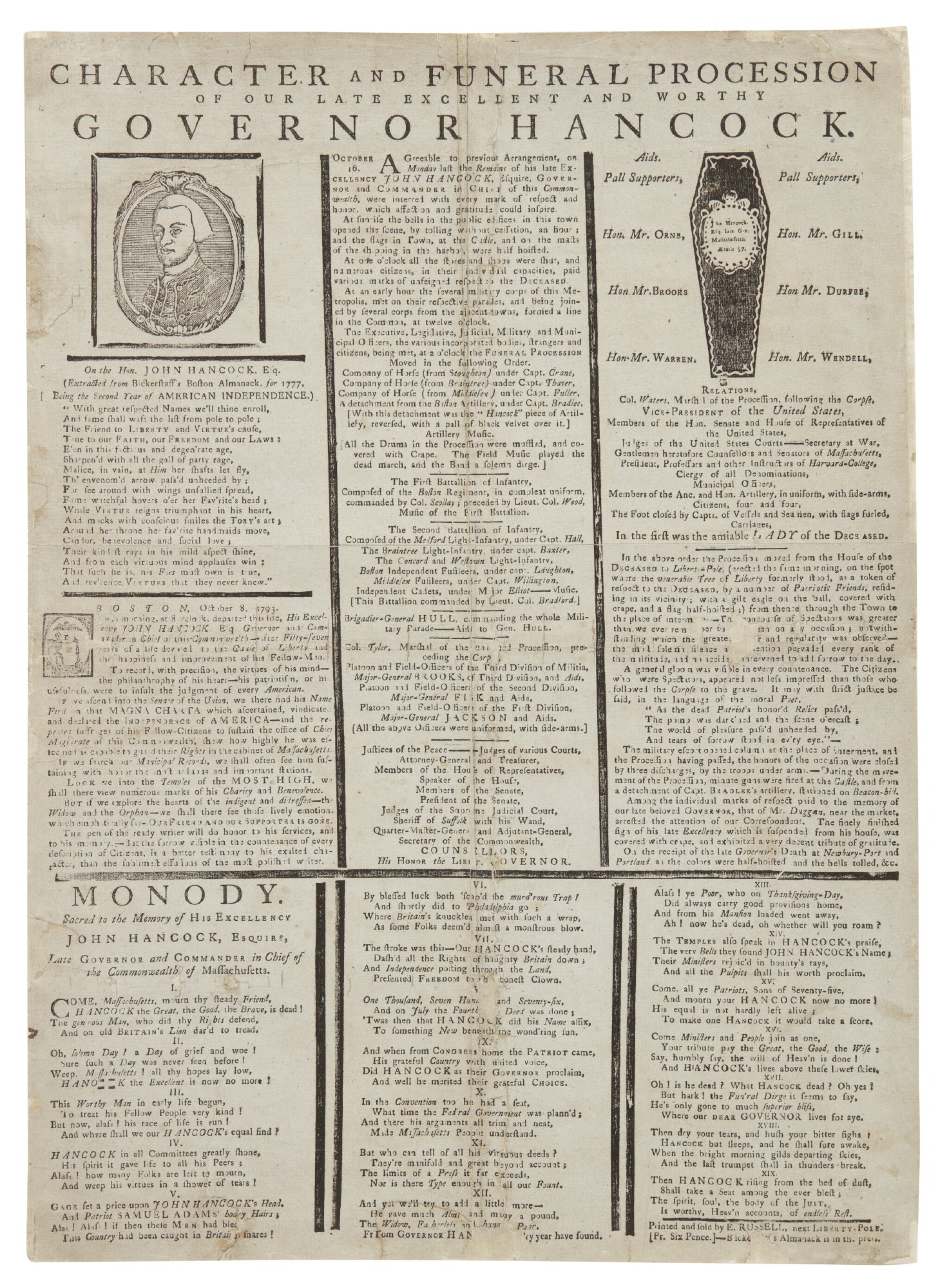 Character and Funeral Procession of Our Late Excellent, and Worthy Governor Hancock, October 16...Boston: Printed and sold by E. Russell, [1793]

Broadside, folio (22 1/4 x 16 1/4 in.; 566 x 412 mm). With a woodcut portrait of Hancock, woodcut of a coffin, and an elegiac poem of nineteen four-line verses entitled "Monody. Sacred to the Memory of His Excellency, John Hancock, Esquire"; rebacked, closing some tears and fold separations, scattered bits of loss of text. The consignor has independently obtained a letter of authenticity from PSA that will accompany the lot.

A very rare broadside; no copies are recorded in the auction records for forty years.

"Come, Massachusetts, mourn thy steady Friend, | Hancock the Great, the Good, the Brave, is dead! | The Generous Man, who did thy Rights defend, | And old Britain's Lion dar'd to tread. …"

John Hancock holds the distinction of being a prominent American merchant, statesman, and Patriot of the American Revolution⁠—not to mention the boldest signer of the Declaration of Independence. Hancock also served as president of the Second Continental Congress, as well as the first and third Governor of the Commonwealth of Massachusetts. By 1793, and at the age of 56, Hancock's health⁠—which had been unsteady for years⁠—was in serious decline. With his wife, Dorothy Hancock (née Quincy), at his side, he died on 8 October 1793.

Hancock's funeral was held on 14 October 1793, and Samuel Adams, then acting Governor of the Commonwealth of Massachusetts, declared the day a state holiday. The funeral itself was perhaps the most extravagant given to an American up to that time (some of the details of which are outlined in the present broadside), and Adams was the chief mourner. During the procession he followed the bier, walking directly behind the body of his friend, but, being so overcome with emotion, he was unable to continue and had to be escorted away. Hancock was laid to his final rest at Boston's Old Granary Burying Ground.