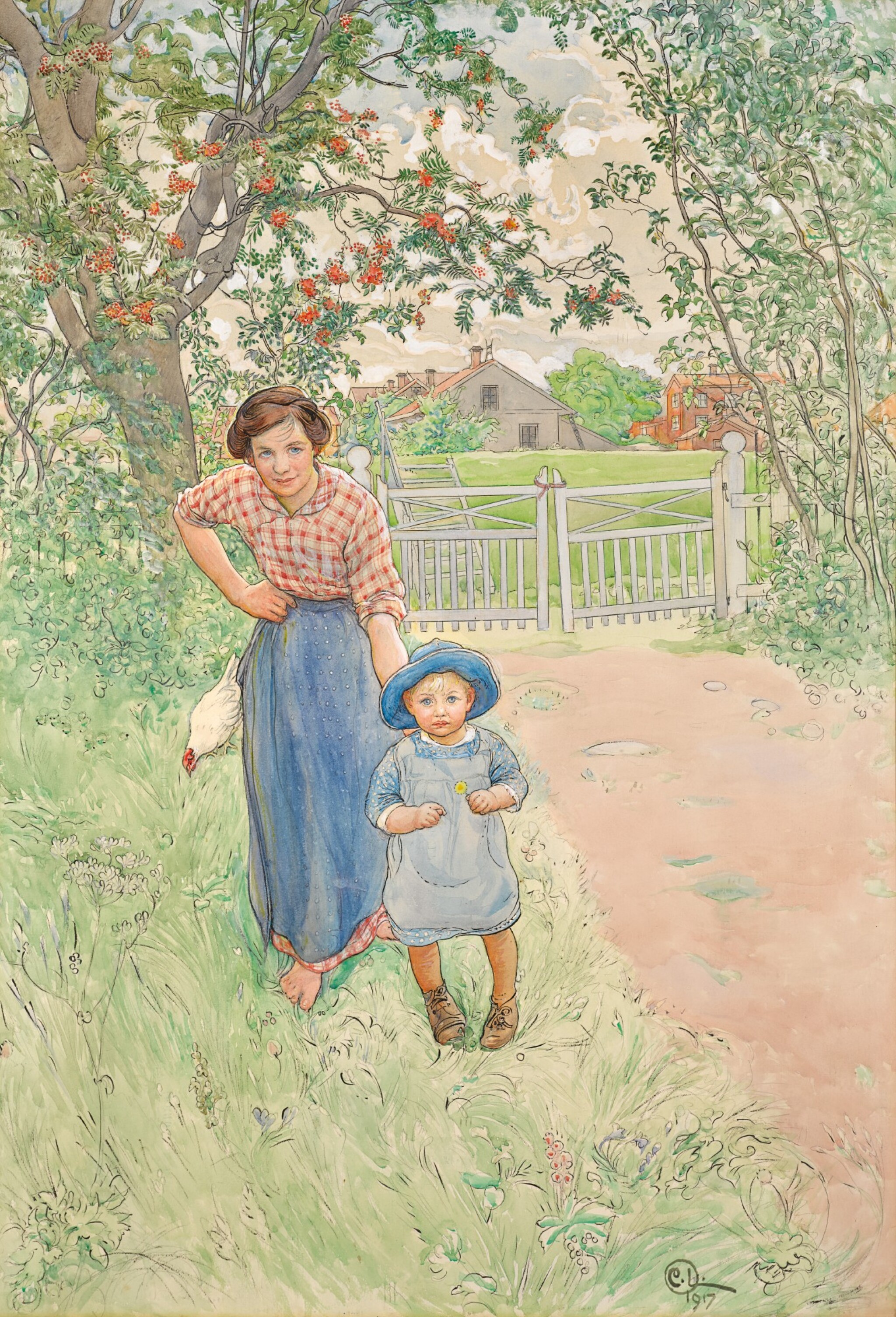 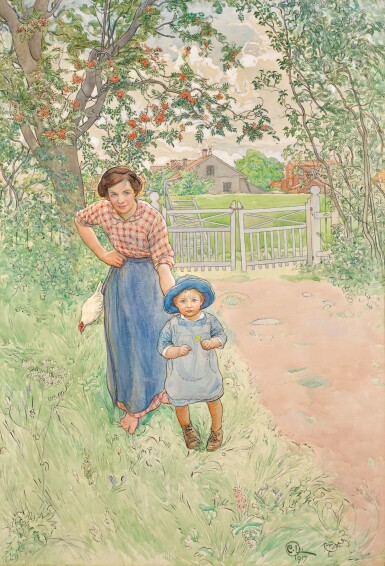 watercolour over ink and pencil on paper

The artist's sheet has been fully laid on fine linen canvas, attached to wooden stretcher which is providing stable support. The extreme edges of the sheet have somewhat browned as it would be expected from a work on paper of this age. Otherwise, the medium is strong and colours are well preserved. Presented glazed and framed.

Ulwa Neergaard, Carl Larsson, Stockholm, 1999, vol. I, p. 577, illustrated; p. 580, cited; vol. II, p. 165, no. 1699, catalogued (as Hälsa vackert på fabor)
Stockholm, Liljevalchs Konsthall, Carl Larssons minnesutställning på Liljevalchs Konsthall, 1920, no. 341
Stockholm, Liljevalchs Konsthall, Carl Larsson - 100 år minnesutställning på Liljevalchs Konsthall, 1953, no. 369 (as Hälsa på farbror)
Stockholm, National Museum; Gothenburg, Gothenburg Museum of Art, Carl Larsson-utställningen, 1992, no. 101
As his children grew up and moved away, in later years Larsson increasingly turned from depictions of his own family life at home in Sundborn to other subjects. His sixth and final publication of 1913 was titled Andras Barn (Other People's Children). The present work is set at nearby Spadarfvet farm and depicts Hilma Kvarnberg (née Sundgren), who was formerly the Larssons' cook, before she married Erik whose family ran the farm. Hilma is depicted encouraging her eighteen-month-old daughter Greta to come forward: she walks unsteadily towards the artist, holding a dandelion flower. Mother and daughter are framed by the lush vegetation, a beautiful example of Larsson's art nouveau technique. A rowan tree laden with its red berries stands behind, while an umbellifer bearing its seeds rises up in front. Beyond the white gates lay the dam, which provided the estate with an early form of hydroelectric power.

The Larssons acquired Spadarfvet farm in 1897, and thereafter Carl referred to himself as an 'artist and farmer'. This connection to the land became increasingly important as his growing family moved definitively to Sundborn after 1901. Following earlier publications Ett hem and Larssons, Spadarfvet: mitt lilla landtbruk with its 24 watercolours was published in 1906. Rather than the Kvarnbergs depicted here, this album depicted the Johansson family, who tended the farm before them. Described as 'Larsson's homage to Swedish peasant culture', the album included scenes of archetypal rural labour such as sowing, mowing, threshing, winnowing, and also slaughtering, the potato harvest, and the apple harvest.