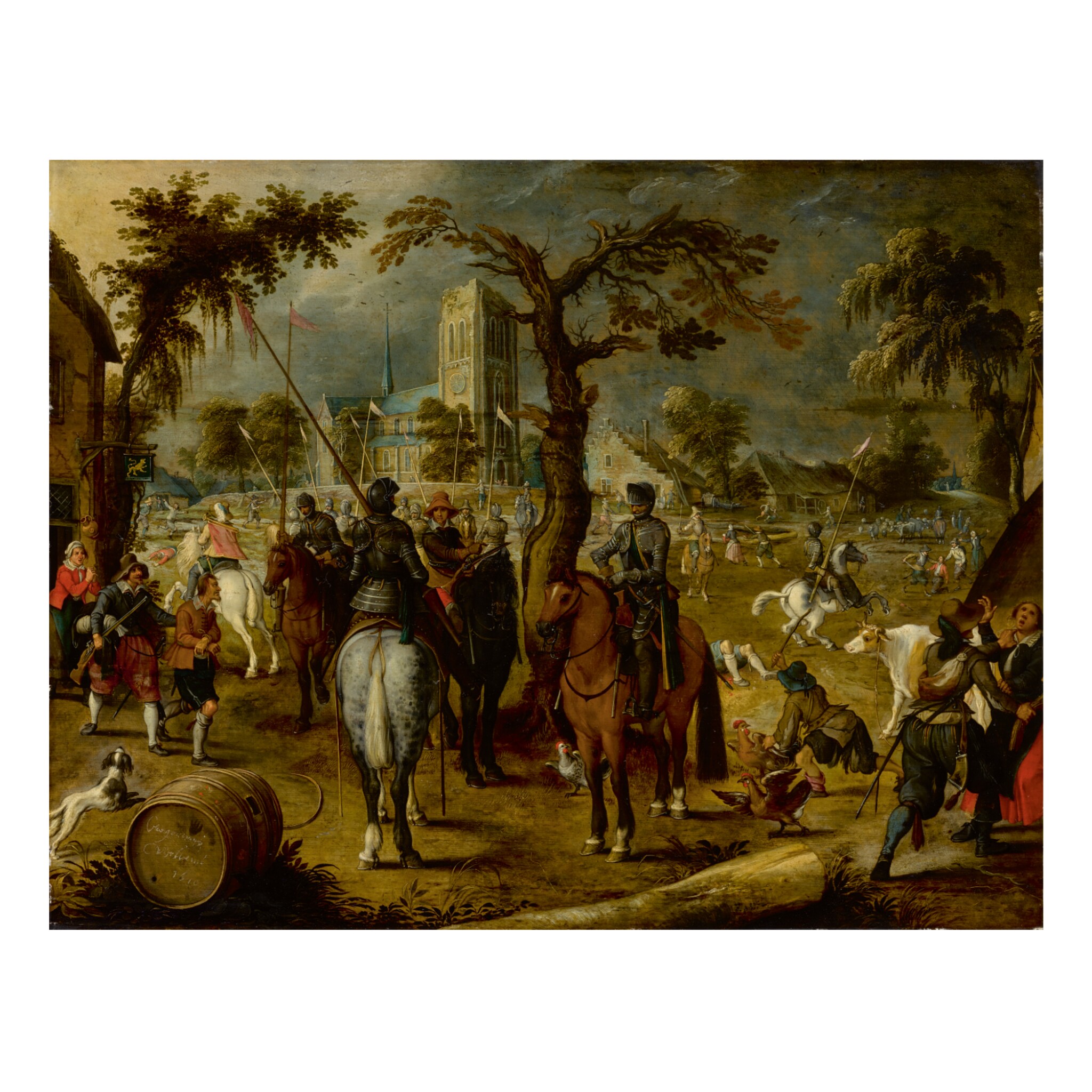 THE PLUNDERING OF THE VILLAGE OF WOMMELGEM

This work has not been recently restored. Although the surface of the panel is slightly uneven, the condition of the paint layer is remarkably good. The panel has four horizontal battens across the reverse, which probably address some old cracks in the panel. The painting is noticeably dirty. There is an original join through the center. There are two cracks entering into the lower sky in the upper right, and a crack is also visible on the left side running towards the church. There is concave wave to the panel in the lower sky.

The paint layer is noticeably dirty. If the work is cleaned, the work would acquire considerably more depth. There presumably are retouches along a couple of these cracks in the panel through the center of the right side and the center of the left side, and through the church and lower right sky, the work seems to mostly be unretouched. There is no abrasion or instability to the paint layer, which is certainly notable.

Private collection, Europe, since at least the mid-twentieth century;

Thence by descent in the family to the present owners.

This dynamic and detailed depiction of an historical event from the Eighty Years War (1568-1648) is an important addition to the oeuvre of the Flemish artist, Sebastiaen Vrancx, a pivotal artistic figure in the development of battle and cavalry scenes in the Low Countries during the early seventeenth century. Dated 1610, it is a relatively early work by Vrancx and serves as one of his first explorations in the genre for which he would become most widely known.

This lively scene is anchored at center by a formidable tree, soldiers on horseback, and the towering church of Sint-Petrus-en-Pauluskerk, which helps to identify this specific location as Wommelgem, a village just northeast of Antwerp. On the wine cask at lower left is an inscription that appears to read vergooten / verbleyt, or “once the wine is poured out, it makes one joyful” (fig. 1). The subject depicted, however, in contrast is anything but joyful, for here Vrancx records the sacking of Wommelgem by troops of the Dutch Republic on 26 May 1589 after the villagers refused to pay tribute.

This particular event captured the imagination of Vrancx throughout his career, and he returned to this subject on a number of occasions on panel and on paper, always including the village’s iconic church tower and the distinctively bent tree [1]. In addition to his drawing of the subject in the Hermitage Museum in Saint Petersburg [2], the paintings include one of circa 1615-1620 in the Kunstmuseum in Düsseldorf (fig. 2) [3] one dated 1629 sold at auction in December 1999 for $565,946 (fig. 3) [4] and one of circa 1630-1640 in a private Belgian collection [5].

Vrancx lived in turbulent times, and he would have clearly remembered the wartime devastation and horrors during his childhood in Antwerp. Throughout his successful career, Vrancx transformed the large-scale battle scenes of the sixteenth century into a smaller scale cavalry scenes and skirmishes, in which the reality of the warfare and day to day life for many of his countrymen during the Eighty Years War overshadowed any recognition for the heroics of chivalry. In doing all of this, Vrancx created a standard type for the genre that would be employed by his contemporaries and followers for generations.