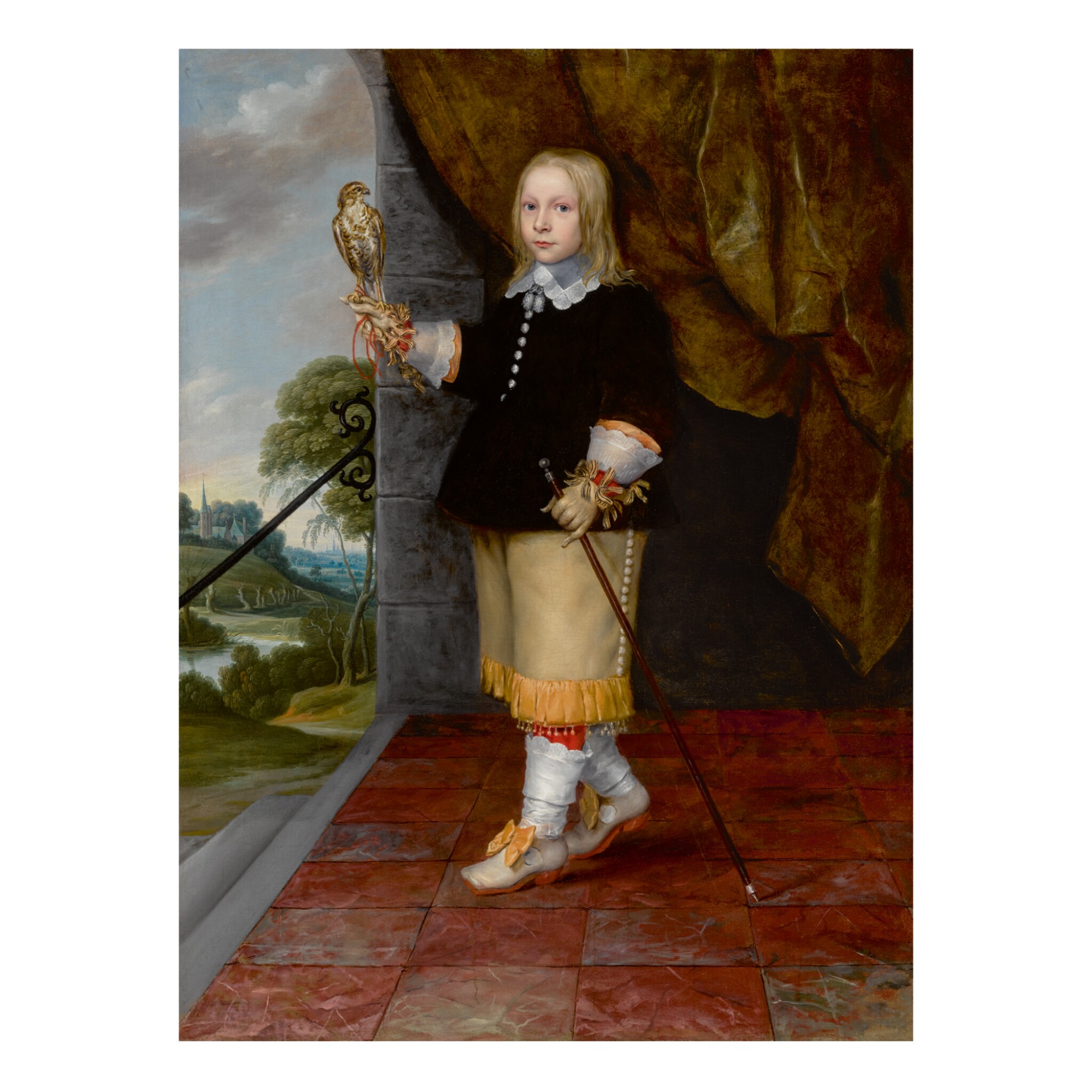 PORTRAIT OF A YOUNG BOY, FULL LENGTH, HOLDING A KESTREL

The canvas is lined. The painting presents an elegant sitter that reads well, though some of the details to the shirt and background curtain have slightly thinned. The landscape at left presents beautifully and its paint surface has been well preserved. Inspection under UV reveals scattered thin inpainting to the sky and face of the sitter, while two more concentrated spots of strengthening are on his face: one on the bottom of his proper left cheek, and the other above his proper left eye. Further spots of retouching are scattered on the black shirt, background curtain, and ground. What appears to be an old repair fluoresces under UV at the bottom of the cane the child holds. Given its size, the painting is in overall good condition and can hang as is. Offered in an ebonized wood frame with a gold inner liner.

This painting stands as testimony to Ludolf de Jongh’s skills in portraiture, a genre that comprises a significant core of his oeuvre. The elegant young man’s costume suggests a date of circa 1648-50, an increasingly productive period for the artist when his portraits were characterized by more animated and colorful features. During the seventeenth century, such full length portraits were reserved for the upper class, and the young sitter’s elevated status is further indicated by his elegant costume and by the exotic bird perched on his hand.

Born in Overschie as the son of a tanner and a shoemaker, Ludolf de Jongh turned his attention to painting upon his family’s move to Rotterdam, training first there with Cornelis Saftleven, then Antonie Palamedesz. in Delft, and finally with Jan van Bijlert in Utrecht. In 1642, after a sojourn in France, De Jongh returned to Rotterdam, and by about 1650, when the present work was likely executed, he had established himself as one of the leading artists of that city as a versatile painter of scenes of everyday life, domestic interiors, and portraiture. Although he was also skilled as a landscape painter, he sometimes called upon others to assist with this element, as is likely the case in the present work; this is also the case in his Rest on the hunt, last recorded in a German private collection [1].

Visible in the present work are some of de Jongh’s most favored visual elements, in particular the contrast between the deep recession into space in the landscape at left, dramatically contrasted against the limited depth at right, here further enhanced by the masonry of the wall.  Comparable visual elements are found also in De Jongh’s full length portrait of a boy with a dog, titled The Lesson and dated 1661, in the Virginia Museum of Fine Arts (inv. no. 63.54), as well his Portrait of a Boy sold at Christie’s London in 2008 for £97,250 [2]. The latter portrait also bears the date of 1648, placing it very close in the date of execution of the present lot.

We are grateful to Dr. Roland Fleischer for endorsing the attribution to Ludolf de Jongh on the basis of photographs and for his assistance in the cataloguing of this lot.