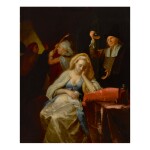 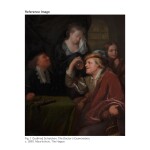 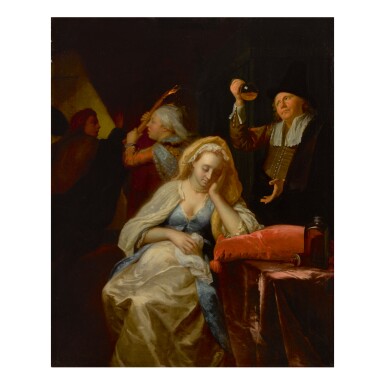 Property from a Mid-Atlantic Private Collection

Canvas appears to be thinly lined. It is stable on its stretcher, and the image reads well beneath the varnish. There is a thin pattern of craquelure throughout the canvas, although this is not distracting. There is some thinness in areas throughout the canvas, for example, in the background where some of the darker details have lost some definition and in the cloak of the figure holding the firebrand. Inspection under UV reveals scattered thin strokes of retouching throughout, in some areas to address craquelure. There are also some spots of retouching visible in the darker shadows of the foreground and background, for example in the curtain at upper left, and in the lower waistcoat of the figure at right. There are thin strokes of retouching to the seated figure's face as well as her costume. Offered in a decoratively carved giltwood frame

By whom bequeathed to H. E. Waller;

C. Hofstede de Groot, A catalogue raisonné of the works of the most eminent Dutch painters of the seventeenth century, V, London 1913, p. 350, no. 144b;

This elegant scene, infused with warm colors and a beautiful light, is a mature work by Godfried Schalcken, one of the leading portrait painters and fijnschilders of his generation. It likely dates from the late 1680s when he was at the height of his career.  Within this darkened interior, he expertly weaves a moralizing tale through his illustration of a doctor's visit—a popular subject for Dutch artists of the seventeenth century, including Jan Steen and Gerrit Dou, with whom Schalcken trained in Leiden as a young artist after his tutelage under Samuel van Hoogstraten in Dordrecht.

Seated at the center of this composition is a young and luxuriously dressed woman. With a downcast expression, she rests her weary head in her left hand, while her right rests on her swollen belly. Behind her stands an inquisitive doctor who examines a sample of her urine in order to detect pregnancy—a consequence here of losing one's virginity. The actions of individuals in the background confirm the doctor's conclusion, as a richly attired figure chases out the purported male suitor with an upraised firebrand, seemingly in defense of the woman’s honor.

Schalcken explored this subject on several occasions throughout his career. One signed and dated example from 1669 is in a private collection [1] while another from circa 1690 is in the Mauritshuis (fig. 1). The present work can be closely compared to this latter example, both in composition and handling, and was likely executed around the same time—an idea further supported by the apparent date of the costume within the present scene. The ruffled lace edging of the seated figure's cap and her dense silk gown with a fitted top fastened at the bosom and shaped like a V were both fashionable in the late 1680s.

We are grateful to Wayne Franits for endorsing the attribution on the basis of photographs. We are also grateful to Eddy Schavemaker for his assistance in the cataloguing of this lot.