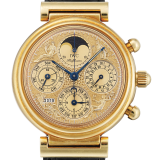 established 1868
Interested in selling a work by IWC Schaffhausen?
Request an Estimate

The history of IWC Schaffhausen began in Boston over 150 years ago. Florentine Ariosto Jones was a 27-year-old watchmaker and engineer, as well as the manager of the E. Howard Watch and Clock Company in Boston, one of the leading American watchmakers. Young Ariosto had an amazing entrepreneurial vision to utilize the incomparable craftsmanship of the Swiss horologists combined with cutting-edge technology to produce the finest quality of watches for Americans. His idea was to transform the small Swiss workshops that had been in existence since the 17th century, into a modern factory with a centralized production method.

To Jones' dismay, most of the Swiss professionals were reticent to move their industry into the then modern 19th century. But then he was introduced to Heinrich Moser, an industrialist from Schaffhausen, the centre of one of the oldest clock-making areas on the Rhine, where the local monastery had produced the earliest clock on record in 1409 for the church of St. John. Schaffhausen is a picturesque town from the middle ages in far Northern Switzerland, in a canton named the same. It's across the river from Germany. There are official records of a clockmakers guild in Schaffhausen since 1583, and it was also home to the famed Habrecht family of horologists, who built one of history's most outstanding astronomical clocks for the Strasbourg cathedral. Nevertheless, it was Jones's plan to manufacture relatively large numbers of high-quality watches in-house to precisely the same tolerances, which enabled timepieces that were made in the town of Schaffhausen to become famous all over the world.

The current IWC, owned by Richemont Corporation since 2000, produces some of the most beautiful, complicated, and ultra-functional watches in the world. Their craftsmanship, technology, and incredible designs put them in an exalted group of watchmakers. The irony stands that despite Florentine Jones' very modern American vision of mass manufacture, IWC continues to produce precision watches with old-world Swiss craftsmanship.

Auctions with Lots by IWC Schaffhausen