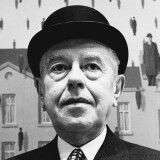 Born 1898. Died 1967.
Interested in selling a work by René Magritte ?
Request an Estimate

Works by René Magritte at Sotheby's

Belgian surrealist René Magritte, born in 1898, is famed for his intriguing images combining everyday objects in whimsical and thought-provoking contexts. His works are known for questioning the experience of perception within painting

From 1916 to 1918, Magritte studied at the Académie Royale des Beaux-Arts in Brussels where his early works were of an Impressionistic style, later influenced by Futurism and Cubism. The artist transitioned to his famed surrealist imagery in 1926, having his first exhibition the following year at the Galerie 'Le Centaure” in Brussels. The show was such a critical disaster that Magritte moved to Paris. There he fell in with artist and poet André Breton, and became a leader of the burgeoning Surrealist movement. Under financial pressures, Magritte returned to Belgium in 1936 where he remained during the Nazi occupation. During the war years, he experimented with a variety of styles, but supported himself largely through the production of fake works by masters including Picasso and Braque. In 1948, Magritte returned to his Surrealist imagery, which he pursued until his death in 1967 and the age of 68.

Among Magritte’s best-known works, the The Treachery of Images (La trahison des images) (1928–29) exemplifies the artist’s humorous engagement with questions of representation. The image shows a pipe as though presented in an advertisement. Below the image the words "Ceci n'est pas une pipe" ("This is not a pipe") are painted, cleverly eluding the illusory nature of the work.

Magritte’s works can be found in museums around the world, notably the Musée Magritte, Brussels, the Museum of Modern Art, New York, and the Philadelphia Museum of Art. The market for work by Magritte is remarkably strong. According to Sotheby’s Mei Moses, the average compound annual return for René Magritte resold at auction between 2003 and 2017 was 10.9% with 94.6% of 111 such works increasing in value.

Museums with Works by René Magritte

Artist Image: © 2018 C. Herscovici, Brussels / Artists Rights Society (ARS), New York / Photograph by Lothar Wolleh © Oliver Wolleh
Please note that prior performance of the indexes and realized returns contained herein does not guarantee future results. In addition, there is no guarantee that random collections of individual works of art or stocks will yield index returns. We are not financial advisors and we are not in the business of recommending art as an investment. We also have no comparative advantage in forecasting the future direction of the art market. Investment decisions should be based on the risk return tolerance and time horizon of the investor with, if desired, the support of a licensed financial advisor. This information is provided "as is" and with no representations or warranties either express or implied of accuracy, merchantability, fitness for a particular purpose or of any other nature are made with respect to this information or to any expressed views presented in this information.