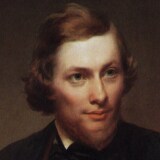 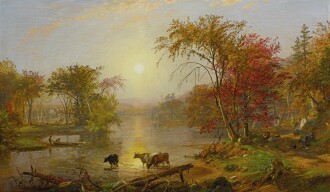 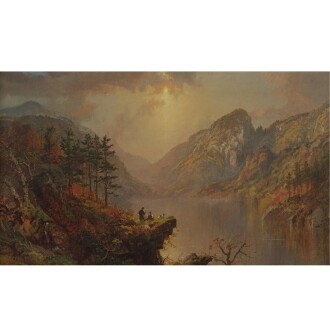 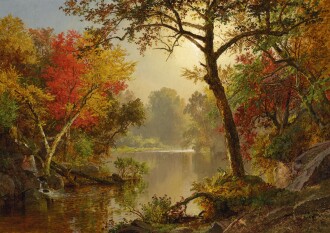 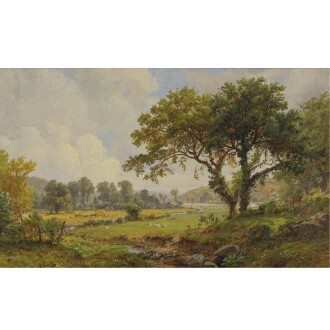 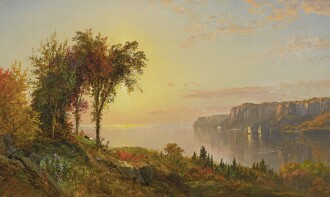 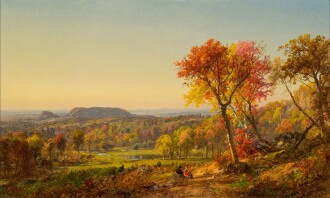 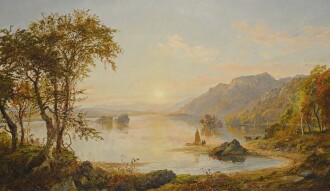 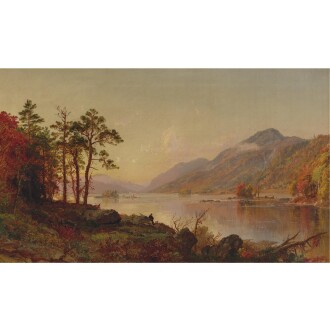 The work of American landscape painter Jasper Francis Cropsey embodies the boldness of the Hudson River School in the nineteenth-century through an exploration of the ways in which nature impacts humanity. He is best known for his particular skill with color, which highlights a spiritual quality of American land.

Born the oldest of eight children in 1823, Cropsey taught himself how to draw during long bouts of childhood illness. He demonstrated particular talent in his architectural sketches and drawings of nature, and as such, he trained as an architect under Joseph Trench, but sustained both an interest in architectural drawings as well as landscape painting. In the early 1840s, he studied watercolor and life drawing under Edward Maury at the National Academy of Design, where he experienced early success, becoming an associate, and later a member. Although he never completely abandoned architectural drawing – notably depicting early landmarks in New York City such as the Sixth Avenue Elevated Railway and St. Luke’s Episcopal Church on Staten Island – he focused his attention largely on landscape for the remainder of his life. He spent much of the 1850s and early 1860s traveling in Europe, living in Italy and later in London with relative commercial success. Upon his return to the United States, he solidified his signature style of warm autumnal views of iconic American landscapes, in which he captured the nineteenth-century spirit and excitement for American land and cofounded the American Society of Painters in Water Colors.

Cropsey’s works continue to captivate collectors; his Greenwood Lake, 1879, sold in 2012 for $422,500. His works can be found in the permanent collections of many major American museums including the National Gallery, the Museum of Fine Arts Boston, the Metropolitan Museum, the Princeton University Art Museum, the Los Angeles County Museum of Art and many others.

Type: video
Category: A Life Less Ordinary
Bo Bartlett on Painting the Modern American Life
Type: featured
Category: A Life Less Ordinary
Wake Up to Life with Bo Bartlett
Type: featured
Category: American Art
Form as Foundation | Bo Bartlett
Type: video
Category: Expert Voices
Modernity and Patriotism In Childe Hassam's Iconic Flag Paintings
Type: featured
Category: Contemporary Art
American Visionary: The Collection of Mrs. John L. Marion
Type: story
Category: American Art
The Enduring Delight of Ludwig Bemelmans's 'Madeline'
Please note that prior performance of the indexes and realized returns contained herein does not guarantee future results. In addition, there is no guarantee that random collections of individual works of art or stocks will yield index returns. We are not financial advisors and we are not in the business of recommending art as an investment. We also have no comparative advantage in forecasting the future direction of the art market. Investment decisions should be based on the risk return tolerance and time horizon of the investor with, if desired, the support of a licensed financial advisor. This information is provided "as is" and with no representations or warranties either express or implied of accuracy, merchantability, fitness for a particular purpose or of any other nature are made with respect to this information or to any expressed views presented in this information.