W atching a movie by the director Wes Anderson is like stepping into a highly curated world. Hyper-stylized, meticulously crafted, aesthetically symmetrical, the idiosyncratic vision of the acclaimed director is uniquely his own – it would be near to impossible to watch an Anderson film without knowing who made it. Among his signatures are a storybook-like flatness, the use of tracking shots, a taste for rich patterns and bright colors, a sense of the nostalgic, as well as a regular stable of actors who include Anjelica Houston, Willem Dafoe, Bill Murray and Luke Wilson, which together have defined movies like The Royal Tenenbaums (2001), The Darjeeling Limited (2007), and The Grand Budapest Hotel (2014). “I like to do things that are a little surrealistic but with characters who are real,” he told The New Yorker’s Richard Brody in 2009. “So that, even if things are a little unusual, the emotions will come through anyway.”

Now, in a first for the director, Anderson and his partner, writer and costume designer Juman Malouf, are curating an exhibition of art and antiques from vast stores of the Kunsthistorisches Museum in Vienna. This “very special exhibition will be quite unlike anything we’ve ever done before,” says Jasper Sharp, adjunct curator of Modern and contemporary art at the museum. “We have given Wes and Juman a very special but somewhat overwhelming invitation: to sort through all the objects in our museum. Egyptian mummies, Greek and Roman antiquities, old master paintings, the Kunstkammer, the Imperial Treasury, the Crown Jewels, ethnographic objects from the Weltmuseum, the Theatre museum, Schloss Ambras Innsbruck, carriages and sleighs, costumes – an embarrassment of riches.”

Anderson and Malouf are continuing a series that began with Ed Ruscha in 2012, followed by potter Edmund de Waal in 2016, in which international artists are invited to present their own selections of art and objects from the museum's collection. What form will this year's exhibition take? What themes are the pair working with? What objects are expected to be unearthed from the Kunsthistorisches’s private stores? The museum is tight-lipped about any details. “What they’re going to do we’re not going to tell you just yet,” says Sharp. “But you can come to the Kunsthistorisches museum and find out.” Until then, Anderson and Malouf have released a cryptic trailer set to a mesmerizing hymn performed by the Muungano National Choir. Check it out here. 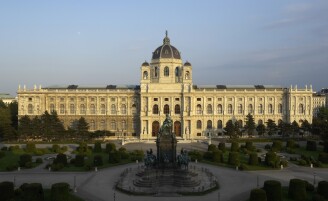