Wayne Thiebaud's Three Donuts, will be offered in the upcoming Contemporary Curated auction on 2 March in New York.

NEW YORK - The most recognizable elements of the Wayne Thiebaud’s oeuvre are brought together in one serene and delectable composition. The artist’s decades-long body of work is defined in part by his continued focus on every day, easily accessible objects and treats, and Three Donuts is a culmination of that practice. In this work subject matter is presented as both graphic and mimetic, containing a dual seriousness and sense of play.

In Three Donuts, Thiebaud employs masterful painterly flourishes and exercises. The artist illuminates the donuts as if by a theatrical spotlight, with a dramatic chiaroscuro imbuing his pastries with a sense of authority and importance. He also brings together unexpected and electrifying color juxtapositions in his underpainting, utilizing hints of cornflower blue and deep violet, with strokes of orange and aquamarine, then paints over these passages with an opaque glaze, giving his donuts a striking vitality and a liveliness that far surpasses what can be expected of the otherwise quotidian subject matter. Finally, Thiebaud skillfully employs heavy impastoed pigment, bringing his painting into the realm of the dimensional and the tangible; each donut is ensconced in ridges of paint, and though they are clearly not drawn from life, they evoke the desire inherent to the real thing.

Thiebaud was born in Arizona in 1920 and came of age in the Great Depression, an era marked by extreme scarcity and economic hardship. By the 1960s, Thiebaud had gained widespread attention and acclaim for his orderly and regimented depictions of ordinary objects that could be accessed by almost anyone, yet somehow made special by his hand. Three Donuts carries on that artistic legacy established in the 60s, exhibiting the care and attention that makes Thiebaud’s work so special. In the words of the artist: “most of the objects are fragments of actual experience. For instance, I would really think of the bakery counter, of the way the counter was lit, where the pies were placed, but I wanted just a piece of the experience. From when I worked in restaurants, I can remember seeing rows of pies, or a tin of pie with one piece out of it and one pie sitting beside it. Those little vedute in fragmented circumstances were always poetic to me” (Wayne Thiebaud in John Arthur, Realists at Work, New York 1983, p. 120). 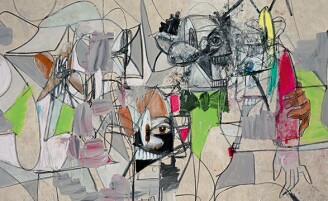