Tensions calmées – or Calmed Tensions – is a magnificent example of Kandinsky’s use for many of his Paris-based works of his precise and antithetical titles. As Christian Derouet, former chief curator of the Centre George Pompidou observed, these contradictions, expressed in two words side by side, with or without hyphen, draw our attention to the formal language within the painting.1 Invariably, the titles address a pictorial conflict between the tectonic compositional values of the Bauhaus years, and the introduction of biological motifs, which bring to mind the Surrealist interest in various scientific disciplines.2

Added to this is the movement and levitation of the new hybrid vocabulary, set against a deep brown cosmic and infinite ground; tellingly, while Kandinsky purchased stretchers and canvas locally in Paris, he remained loyal to his German art-suppliers in Berlin and secured tempera paints from them via his nephew, Alexandre Kojevnikoff.3

Indeed, the musicality of the colouration – subtle contrasts between transparent and denser pastel hues – belies the irony that the work Tensions calmées was painted at a most dramatic and critical time in twentieth-century history. During the 1930s, not only artists, but also dealers, collectors, art historians and museum directors from Germany were forced into exile by the racial and cultural politics of National Socialism. Nevertheless, at a time of immense duress for exiled artists in Paris, Brussels, Amsterdam, Prague and London, modernism’s transnational appeal gained momentum in the United States.

In September 1938, the émigré art dealer Karl Nierendorf purchased Tensions calmées, among other works, directly from Kandinsky. The painting’s journey from Paris to New York, its inclusion in notable exhibitions and acquisition by the Solomon R. Guggenheim Foundation in 1945, is well-documented. So, too, is its auction at Sotheby’s London in 1964 and disappearance into a private collection, only to re-emerge fifty-seven years later. Now there is the opportunity to examine the painting anew and to focus on its context and enigmatic formal qualities. 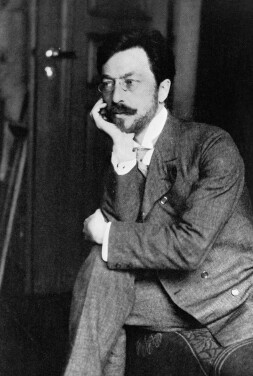 We learn from Nina Kandinsky’s memoirs of how, after the closure of the Bauhaus in Berlin and escalation of the Nazi dictatorship, the couple’s departure was plagued by official bureaucracy.4 The French consulate was inundated by anxious German passport holders clamouring for visas to leave the country. Fortunately, on the advice of Marcel Duchamp, the Kandinsky’s had set up rented accommodation in Paris beforehand. By January 1934, they were settled in Neuilly-sur-Seine, half expecting to return to Germany at a later date.
But, as we are aware, this was not to be the case.

The Nazi campaign against modern art reached a climax in the first half of July 1937, when some 1,100 artworks from 30 museums were chosen and ordered to Munich. On 19 July, roughly 600 of these were denounced in the exhibition ‘Entartete Kunst’ (Degenerate Art); Kandinsky’s now lost painting Zweierlei Rot (1916), was confiscated from the Nationalgalerie in Berlin and featured prominently in the display (fig. 1). If Kandinsky had previously neglected to dissociate himself from the tyrannies of the far right, by June 1938 his attitude had changed as he signed a petition in support of Otto Freundlich, a German-Jewish artist living in Paris.5

Earlier that year, moreover, several of Kandinsky’s Paris works, including Tensions calmées, were sent to the Abstracte Kunst exhibition, which was held at the Stedelijk Museum in Amsterdam. Organised by the conservator-cum-curator Willem Sandberg and the architect Mart Stam, the exhibition was a deliberate reinstatement of the avant-garde, signalling an important moment in subverting Nazi cultural ideology.

In a vintage photograph of the installation (fig. 2), we see Tensions calmées, surmounted by Kandinsky’s large-scale Composition IX, 1936 (Centre Georges Pompidou Paris), to the right Groupment, 1937 (Moderna Museet, Stockholm) and the painting Deux entourages, 1934 (Stedelijk Museum, Amsterdam). The pioneering white walls and the manner in which the artworks were displayed set a new standard at the museum.

The exhibition brought together not only the works of artists banned from Germany, like Freundlich, Paul Klee and Kandinsky, but also Piet Mondrian, Theo van Doesburg, and the British artists Barbara Hepworth, Ben Nicholson and Henry Moore. In this international setting, Kandinsky clarified his artistic evolution in an important essay Abstract or Concrete?, which appeared in the catalogue (fig. 3).6

Therein he embraced the term concrete (as opposed to abstract) as a valid description of his kind of art, a new world that had nothing to do with reality. Paying tribute to the significance of creative freedom, he stated: "We have before our eyes the exhibition, organized by Amsterdam’s Stedelijk Museum [which] does not offer words but facts’, and he continued, ‘Every genuine work of art says: “Here I am!”’ Certainly, we can agree with him that the painting Tensions calmées bears the markers of its time and place in challenging “Entartete Kunst” and proclaiming artistic freedom. 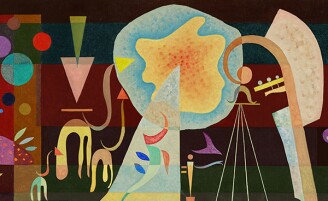